She's Gonna Have It

In 2003, women continued to claim and transform the cinema. 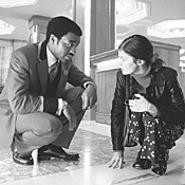 Unless you've been living under a rock for the last year -- which often seems advantageous -- you may have noticed that there's a pugnacious air of defiance among today's young women. Far be it from a film critic to attempt an essay on gender studies, but hey, look around: These femmes aggressives aren't the bra-burners of yesteryear or the punk-rock girls who followed -- or various carbon copies of either. They're a new breed, wielding a mobile phone in one hand and hitching up the plumber pants with the other, karate-kicking with every step, taking over the world. If they haven't yet invaded your town -- well, they have: Got a niece? The question is, are movies, as part of a greater (or lesser) pop culture, catalyzing this behavior? Or is art reflecting life, as cinema simply races to catch up with the evolution of the species?

Glance back through the last century and name some really strong women from the celluloid realm. Can you list a dozen without straining? Mary Astor, perhaps, and Lillian Gish. Katharine Hepburn, Catherine Deneuve, Ingrid Bergman, and Eartha Kitt. Marlene Dietrich, Mae West, Sophia Loren, Maggie Smith, Elizabeth Taylor, and Lucille Ball. Fair enough. And there were others. But sometime shortly after the initial impact of such powerhouses as Jane Fonda and Sigourney Weaver, the general expectations and offerings of women in popular cinema changed shape. Apparently forever.

Based on the movies of 2003, it is fairly obvious that history as we've known it is coming to an end, and herstory is finally grabbing the movie world by the . . . er . . . lens. Some people were instructed to find depth in Scarlett Johansson's dull moping in Sofia Coppola's Lost in Translation and succumbed. More adventurous thinkers turned to the morbid yet life-affirming work of the awesome Sarah Polley, directed by Isabel Coixet, in the splendid My Life Without Me. Or we got Parminder Nagra, struggling not only for racial, cultural, and gender acceptance, but fair billing along with Keira Knightley on the white-market ads for Gurinder Chadha's Bend It Like Beckham. Girls freaked out in Catherine Hardwicke's fictional Thirteen and Liz Garbus's not-fictional Girlhood, a woman killed herself in Christine Jeff's Sylvia. A girl saved Thailand from the Burmese in The Legend of Suriyothai, a girl saved True Love for a later date in I Capture the Castle, and the list went on. Girl movies were in no short supply.

Consider also this last year in feminine violence, when we probably observed more female movie characters walloping people than ever before. In the first installment of the Kill Bill saga, Uma Thurman slaughtered, what, about a hundred people? Angelina Jolie returned as adventuress Lara Croft, not only kicking the ass of everyone in sight, but blowing away her would-be lover in the Tomb Raider sequel's climax (how romantic). In X-2: X-Men United, the curvy likes of Halle Berry and Rebecca Romijn-Stamos teased and thrashed in equal measure. And rising above them all was the sensational and criminally underrated So Close, wherein screen sisters Shu Qi and Vicki Zhao executed balletic moves while, of course, executing people -- men, to be specific. Intriguing fact, though: All these movies were directed by men -- possibly, probably, employing their female characters for some sort of vicarious venting that simply wouldn't fly, in what remains of the civilized world.

Is this empowerment? Hard to say. But the contemporary cinema can vastly enhance one's views on the complex subject.

Take, for example, one of 2003's top films, the sublime Dirty Pretty Things. This tale of illegal immigrants struggling on London's harsh periphery (a subgenre unto itself) was written by a man (Steve Knight), directed by a man (Stephen Frears), and features a male hero (Chiwetel Ejiofor, perfection), yet there's not a cliché in the house. Even France's luminous Audrey Tautou, who made a name for herself playing deranged ingénues, offers a surprising, inspiring mix of vulnerability and determination. Her Turkish immigrant, fighting to avoid enslavement in London, leans on Ejiofor's Nigerian one with increasing desperation, yet never appears weak.

"What I really liked was [my character's] humanity, her strength, and yet at the same time, despite her strength, she's also very defenseless," says Tautou. "Because she's in such a situation that, despite all of her efforts, she can't get out of this by herself, on her own.

"When I read the script, she seemed a much weaker character. And so I told Stephen [Frears] that was coming out for me. First he said yes, that's very good, and then he thought about it and said, 'No, I think you need to play it exactly the other way.' And I said all right, because I really trusted him. Then I played her with much more strength, and I think that they sort of adapted the character that way, and it made it richer."

Monster, the feature debut by director Patty Jenkins (note: a woman), is the year's darkest girl-against-the-world movie. Yet it's not the stuff of gratuitous, exploitative "catharsis," but humanity and compassion. (If you'd like to meet the monster's foster fathers, see Lourdes Portillo's harrowing documentary Señorita Extraviada, which adroitly connects economic and cultural violence with abuse toward women.) Starring Charlize Theron in a genuinely stunning performance as real-life Florida prostitute and serial killer Aileen Wuornos, Monster doesn't shy away from the roots of loathing and violence, inner and outer, but gives us the terrors of trying to fit into a world that won't have you. With a brilliant appearance by Christina Ricci -- not as a porn actress, but as that other dreaded outsider, the gay person -- it's a funny, sad, ghastly, and thoroughly humane portrait of a modern girl who got a really raw deal. Although the title refers to a large Ferris wheel, we're left wondering whether the girl or her environment is the real monster.

Then there's the not-so-subtle but equally poetic depiction of a woman battling an actual monster in Peter Jackson's paean to patriarchy, The Return of the King (co-written with Fran Walsh and Philippa Boyens, both card-carrying women). Miranda Otto plays regal Éowyn, who dotes on her kingly uncle Théoden, but when it's time for battle, doesn't shy away from a demon riding a phallic flying beast.

"My whole thing about the battling is that I never felt that it was because [Éowyn] was so physically strong," says Otto. "It's more about her strength of will and her strength of heart. That's very much what the film talks about. Also with Samwise and various characters: It's not about how big and strong you are. It's about how mentally tough you are, and how prepared you are to die for what you believe in, how prepared you are to put yourself on the line for the people that you love. And that's the kind of strength that she has. Her strength is not running away from the Witch King, but standing up and saying, 'I will kill you,' and also that 'I'm prepared for you to kill me, and I'm not going to back down.'"

Otto is pleased by the concept that feminine strength is increasing in the cinema, even in theory. "Well, it would be nice if that's true. It's important that they're not just physical roles. It's important that we see strength not just as the fighting, but also where [the female leads] set up a story, and what they do in the story. And also what I like about Éowyn is that at first it seems like it will be a romantic story and the significance of her in the film will just be about her love for Aragorn, but it turns out that she becomes a character in her own right. And I think that's the sort of thing that I like to see in women's roles -- that they're not just there, as Judy Davis once said, to prove that the male lead isn't gay. It's important that they have roles and motivations and things to do. You shouldn't just hide behind the physical aspect; make sure it's mentally strong as well."

Just as she drove her sword into the Witch King's head, Otto, who credits Jodie Foster for inspiration, is not vague about driving the point home. "So often, as women, we play roles that are very emotionally reactive, but I'd like to play someone whose main characteristic is just being very, very smart."

From the other side of the world, Audrey Tautou echoes the deceptively simple notion: "I like intelligent films."