Drive-By Truckers find that sometimes change (and a pit stop) can do you good. 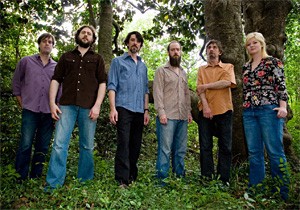 It's been an eventful year for the Drive-By Truckers, one that signals a new chapter in their story. Six years ago they released their magnum opus, underwent a vital lineup change, and saw their fortunes shift dramatically. Now there's reason to believe history is repeating itself.

In 2001 the quintet self-released its fourth album, the critically acclaimed Southern Rock Opera, a two-disc song cycle. It was eventually picked up and re-released by Lost Highway, a subsidiary of Universal Music Group.

That same year guitarist Rob Malone was replaced by Jason Isbell, giving the Truckers a third talented songwriter alongside Mike Cooley and Patterson Hood. Over the next six years, the Truckers found escalating success and respect for their blend of punk swagger, Stonesy country rawk, and southern-fried themes.

As their stature rose, however, the grind of constant touring exacted its toll. In an interview last year, while supporting the Black Crows on a stadium tour, Hood expressed frustration: Playing before big, indifferent crowds didn't feel like a step up. And after a fall tour as headliners, the band took extra time off to recharge and reinvent itself — which began with Isbell's departure in early 2007.

Hood told reporters Isbell wanted to tour more than the Truckers intended and put more focus on his solo career. (Hood co-produced Isbell's debut, this summer's Sirens of the Ditch, which was four years in the making.) But Isbell is also divorcing his wife, Truckers bassist Shonna Tucker. If that plays into his departure, you won't hear it from the band. (Isbell was unavailable for an interview.)

Around the time Isbell left, the Truckers added temporary member Spooner Oldham. A legendary Muscle Shoals keyboardist and songwriter, Oldham not only appears on such classics as Percy Sledge's "When a Man Loves a Woman" and Wilson Pickett's "Mustang Sally," but he has worked with Aretha Franklin, Bob Dylan, Neil Young, and Etta James.

When it came time for the band to back Bettye LaVette for the soul singer's new disc, Scene of the Crime, the Truckers knew a master like Oldham had to be involved.

"It was a great experience. We did it at FAME in Muscle Shoals [in Alabama], where they recorded all that amazing soul stuff, and doing that with her — it was a career highlight," says Cooley, calling from his home, also in Alabama. "It came along right in the middle of all this time off we were taking, and of course, everyone was wanting to play."

Oldham enjoyed it so much, he joined the Truckers for the Dirt Underneath Tour, which started last spring. It finds the band eschewing electric guitar squall for quiet moments, neglected numbers, and acoustic revisions of older tunes.

"We weren't planning on spending the whole year on the road, and we did have a new record out. So it was the perfect time to do something different," explains Cooley. "When you strip it back a little bit — take the electric guitars out of the equation — the songs themselves come across."

The tour — the last leg of which ends shortly after the band's October 24 gig at the Beachland — has also afforded the Truckers the opportunity to road test songs for their upcoming album. Tentatively titled Brighter Than Creation's Dark, it will feature 19 new tracks. So yeah, Cooley and Hood, the band's principal songwriters, have had no problems covering for Isbell's absence.

While the new disc is not acoustic, the tour definitely had an impact on its songs. "You're able to listen to each other a lot more, and you have to," says Cooley. "We definitely carried that into the studio in making this record. Whether it was a rocker or not, I think we were a lot better than we've ever been at listening to each other and paying attention to what each other are doing,"

Of course, after 20 years of writing together — first in their college band, Adam's House Cat, and now in the Drive-By Truckers — Cooley should know Hood pretty well. Looking back on their partnership, he says one thing comes to mind.

"What the fuck was I thinking?" Cooley chuckles, reflecting on all the wrong turns and cul-de-sacs along the way. "At any given moment, one of us had a bad idea, and the other one agreed with it."

Then he gets serious and remembers the moment — when both of them were in their 30s — that he felt their partnership just might succeed. They were working dead-end jobs and saw no future, but somehow, something clicked. "Suddenly we got to a point where we didn't care; we were just having fun, and damn if people didn't start liking it."

Cooley says he's seen it happen before — practically studied it, watching "people who tried to latch onto this or that, or took the advice of this or that label guy and never quite got off the ground. Then lo and behold, they got free and clear and sick of it all, and started doing what it was they actually did. Then they had an audience of more than 10 people ignoring them."

For the Truckers, that chapter in their story has already been written. Another begins in January, when the new album drops. After a dozen years of making music, there are hints that it may be the best thing they've ever done. Will the mainstream buy it? Who knows? And according to the Truckers, who cares? The band's only concern now is having fun and being truthful.

"Once you start being honest with yourself and doing what it is you do, that's when it's going to work or not," offers Cooley. "And generally it does."