Rufus Wainwright is on the verge of greatness -- and he knows it. 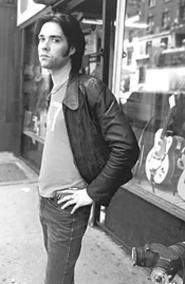 On first impression, pretty much everything about 28-year-old singer-songwriter Rufus Wainwright has a regal air -- his musical bloodline, his wise-old-soul artistry, his bored-but-focused conversational tone, even his model good looks.

Ask him how he wants to be remembered, and he'll smoothly answer, "As a great beauty -- in every sense of the word!" Of course, he immediately backpedals via a handful of "no, no, no"s drenched in self-mocking laughter, but these aren't so firmly delivered as to erase the impression that he was being quite honest to begin with. Wainwright is a man sure of his talents and his place, or else he hides his doubts confidently; his psyche's palace has many rooms.

Conversing briefly on the opening day of a five-week U.S. tour, which will be coming through Oberlin's Finney Chapel on February 23, Wainwright is more Hal than Hamlet. He's playful when discussing his work habits ("I pretty much completely live in la la land"). He's funny when reconciling his loner songwriter instincts and the image his incessant gossip-column appearances seem to inspire ("I'm like the lonely wolf out hunting in the forest"). And he indirectly invokes his growing status as a gay icon when talking about some of his recent musical favorites ("I like that Sigur Ros record, mostly because I liked their video [for "Vidrar Vel"], where there are two 13-year-old boys, playing soccer, making out"). Wainwright seems to be fashioning an image of a happy-go-lucky so-and-so. He's beautiful; it works.

Yet listen to him talk about the emotional sources of his music, and he begins to resemble the melancholy princes of Bob Dylan lyrics and many a hero of 20th-century American bildungsromans. His two albums (1998's self-titled debut and last year's critically acclaimed Poses) are brimming with songs whose self-sufficient, sad air suggests nothing so much as personalized Cole Porter laments, made over by socially modern themes and post-Beatles pop chutzpah. Whereas his debut was more wide-eyed and innocent, Poses is a bit more preoccupied with his burgeoning stardom and his much-written-about bed-hopping.

"I tend to throw myself into situations in my personal life which are doomed to failure," says Wainwright, laughing and pondering how that affects his music. He's "never shied away from the precipice of the heart," he adds dramatically. "Perhaps if I was very happy, I'd still write music, but there's a side of me that really does believe a lot of [my creativity] stems from unhappiness and pain and just dealing with that. Dealing with excesses of emotions or certain effects of some cause. Songwriting and music makes sense of that stuff for me. The only thing I can put unhappiness and pain into is songwriting, or painting or something. That gives it worth. Otherwise, it just seems like a waste of energy."

There's a degree of classicism in his work that most of his contemporaries -- piano-playing popsters like Ben Folds and Fiona Apple, lush creationists Eric Matthews and Sean O'Hagan, downcast-gaze storytellers Elliott Smith and Ron Sexsmith -- simply cannot match, if they even aspire to. Maybe it's because they just ain't got the pedigree.

Son of Kate McGarrigle -- who, along with sister Anne, established the McGarrigle clan as Canada's first family of folk rock in the early '70s -- and acerbic folk troubadour Loudon Wainwright III, Rufus grew up in his mother's artistic Montreal household. He may not have been specifically groomed for greatness, but he was taking piano lessons and performing standards at family recitals from his preschool years.

"I heard my calling early on. I was a creative type, constantly running around singing, tap-dancing, and dressing up in my mother's clothes. I was very much trained as a child by my mother, being aware from a young age that it was a job, and that the more I practiced, the more I worked on getting my own something, the better off I'd be. I was never ever told, 'Oh that's nice, Rufus'; the minute she didn't like something, my mother and my father would come down hard on me."

Rufus's early musical passions were rather esoteric for a young man growing up in the late '70s and early '80s. He cites a love for the minstrel-era balladry of Al Jolson, the cabaret-minded chansons of Edith Piaf, the spare piano and vocal work of Nina Simone ("one of the artists that made me realize my sound"), in addition to the Beatles records that were always lying around. But they were just the beginning of an atypical musical journey.

"When I was 13 or 14, I really got into classical music and opera, and listened to that nonstop. I don't think it was so much about rebellion [as] about finding a type of music that I could know about more than anyone else -- my parents weren't particularly big opera fans -- and more about finding [my] own space. So I sort of dove into that."

Inevitably, Wainwright does return to the question of his music's worth in "the malaise of our stinky society" and his place in it.

"I want a place in line, in the great tradition of American songwriters and American singers. [That tradition] may not be at the forefront right now; I mean, singer-songwriters are not selling millions and millions of records, and I'm not playing Madison Square Garden. But a lot of people are coming to my shows, and there's a buzz about me, and I'm learning about the in-betweens of things, so I'll be pretty knowledgeable when I am playing those pretty big places."

So, Prince Rufus, you have no doubt that brighter lights and bigger stages await?