Shivaree. Friday, June 2, at the Symposium 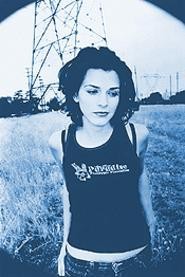 Shivaree's Ambrosia Parsley got her start singing with a 99-piece senior citizen banjo band when she was seven. Parsley, who was born in Reseda, California (but her family has roots in rural West Virginia), hasn't been the same since. On Shivaree's debut, I Oughtta Give You a Shot to the Head for Making Me Live in This Dump, she sings in an upper register that's equal parts Sheryl Crow, Victoria Williams, and Billie Holiday, while the rest of the band -- keyboardist Danny McGough and guitarist-bassist Duke McVinnie -- manufactures a synthetic bluesy backbeat that sounds like something you might hear on a Tom Waits record. For the live shows, Shivaree has expanded to include drummer George Javori and bassist Sheldon Gomberg, who undoubtedly will give songs such as the moody "Goodnight Moon" and "I Don't Care" the rich texture they require to work in a live setting.