An experimental director and a harrowing story fit The Jacket perfectly. 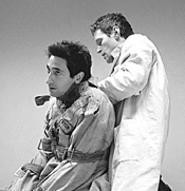 Come this time next year, The Jacket may well occupy the slot in movie discourse that Eternal Sunshine of the Spotless Mind does now -- that of the film that coulda-shoulda-woulda gotten more Oscar nominations if only it hadn't come out so early in the year and been forgotten by those with short-term memories. Like Eternal Sunshine, it's made by an experimental auteur type who puts his eccentric touches on a story that's more conventionally accessible than usual; it features a love story that's more about longing than actually having; and it even has as its female lead a British heartthrob donning large quantities of hair dye to convincingly play an unconventional American.

Unlike Jim Carrey, however, Jacket star Adrien Brody is well liked by the Academy. So who knows? In the meantime, enjoy the first great film of 2005.

It opens with a series of night-vision images and garbled, static-filled audio, not dissimilar to George Lucas's student-film version of THX-1138. Even when night vision turns to full color, things remain jumpy and off-kilter, as we're in the middle of a Gulf War battlefield, occasionally interspersed with shots from the TV news. Jack Starks (Brody) is trying to comfort an Iraqi child when suddenly the kid pulls a gun and shoots him in the head. Things go white as Jack tells us that "I was 27 the first time I died." Miraculously, he survives, and just as miraculously, there is no lame Jacob's Ladder twist later in the movie that might reveal him to have been dead all along.

Back home and out of the hospital, he encounters a little girl (Laura Marano) and her drunken mother (Kelly Lynch) on the side of a snow-covered road. He manages to fix their broken-down truck and gives the young girl his dog tags as a souvenir when she asks for them. Not long afterward, he hitches a ride with a creepy redneck (Brad Renfro), and things take a turn for the worse. A policeman ends up dead, the redneck disappears, and Starks is on trial for murder -- only because of his head injuries, he can't remember all the details. He does recall the girl and her mother, but doesn't have any proof that they ever existed. (Sharp-eyed Star Wars fans may recognize Garrick Hagon, better known as "Biggs," playing Starks' attorney.)

Starks is found to be criminally insane and sent to an asylum, where he's watched over by doctors Kris Kristofferson and Jennifer Jason Leigh. The place is pretty run-down, but thankfully not in any kind of David Fincher decay-chic way. Rather, it looks like many real medical facilities in that it doesn't seem to have received much in the way of new decor or equipment (or even a good scrubbing) since the '70s.

Part of Starks' treatment is an experimental technique developed by Dr. Becker (Kristofferson), in which the patient is shot full of drugs, placed in a musty old straitjacket (the jacket of the title), and shoved in a mortuary drawer for an extended period of time. Such would freak anyone out, and director John Maybury invites us to do so along with Starks; he rolls out some experimental editing and color techniques that call to mind a hybrid of the 2001 stargate sequence and the videotaped images of The Ring.

And then the high concept happens: Starks wakes up in what he will later discover is 2007, standing outside a diner in a snowswept landscape. He meets a cute goth gal (Keira Knightley) who seems strangely drawn to him. And while at her house, he discovers . . . his own dog tags. Clearly, she's the little girl. But he can't be Starks, she insists, because Starks died not long after he was committed. His death, then, is imminent, unless he can figure out how it happened and whether there's any way to prevent it.

Director Maybury's last full feature was 1998's Love Is the Devil, a biopic of artist Francis Bacon. Stymied by the Bacon family's refusal to allow him to use any distinctive artwork, he instead used form and color to suggest that the entire film was a Bacon painting. Turns out Maybury himself is a painter and multimedia artist, and this experimental technique isn't confined to depictions of artists -- here he puts the viewer inside the head of a shell-shocked veteran, much as Michel Gondry and Charlie Kaufman placed the viewer inside the head of someone whose memories were being erased in Eternal Sunshine.

If that's not enticing enough, fellas, here are three words for you: Keira. Knightley. Naked. Not for long, but long enough that DVDs and freeze-frame buttons will be worn out by year's end.