Eddie & the Edsels bring the sock hop to the Savannah.

June 11, 2003
comment
The Rock-n-Roll With a Twist series 65 locations, including the Hard Rock Café, the Agora, and the Beachland The cards are free. For more information, e-mail Frank Derrig. 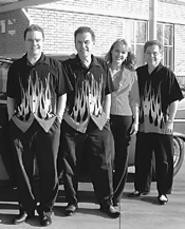 Bill Morris and his band like to brag about the wave of young people catching on to the music of their parents. The frontman for Eddie & the Edsels teams up with his two brothers and fiancée for a '50s-style sock hop every Monday night at the Savannah Bar & Grille, where multigenerational crowds are becoming the norm. "I guess it just goes to show that there will be an audience for this great old music for a long time to come," says Nancy Sias, the band's singer/sax player. This week, the quartet will host a CD Recording Party for its next disc, scheduled for an August release.

Bill and his younger brother, Dan, are former members of Rapid Transit, the last house band on the groundbreaking '60s music show Upbeat. When it went off the air, the Morrises formed the Edsels. "Some of our most regular followers are jitterbuggers and swing dancers, but we love rock and roll too," Sias says. "We try to mix up the music throughout the evening." Eddie & the Edsels' CD Recording Party is at 7 p.m. Monday, June 16, at the Savannah, 30676 Detroit Road in Westlake. Admission is free; call 440-892-2266. -- Cris Glaser

Peter Cincotti has performed at the Grammys and the White House, he's gigged with Harry Connick Jr. at Madison Square Garden, and his debut CD is at the top of the jazz charts. He's a Columbia University student, and he still finds time to tour. Not bad for a 19-year-old.

Cincotti's talents bloomed at age three, when he taught himself to play the piano on a 12-key toy. Soon, his parents invested in a Baldwin and formal lessons. His big break came when he was seven: His sister got backstage at a Connick concert and told the star about her brother. After hearing little Peter's ivory-tickling, Connick invited the prodigy to perform with him. Cincotti plays (sans Connick, but with Dominick Farinacci) at 7 and 9 p.m. Sunday and Monday at Night Town, 12387 Cedar Road in Cleveland Heights. Tickets are $30; call 216-795-0550. -- Cris Glaser

The highfalutin term for what the Anahid Sofian Dance Company does is Raqs Sharqi. Most of us, however, know it as belly dancing. Sofian is this country's premier belly dancer -- er, Middle Eastern dance performer. Her revered troupe makes its Ohio debut as part of the Cleveland Museum of Art's Carnevale World Music and Dance Series at 7:30 p.m. at the museum's Gartner Auditorium (11150 East Boulevard). Tickets are $23 to $28; call 216-421-7350. -- Michael Gallucci

Earth, Wind, & Fire's first studio album in six years doesn't stray far from the hitmakers' formula. The Promise works the veteran ensemble's funk and soul into an elastic, cozy set. It's heavy on ballads -- not a bad move, since Philip Bailey's falsetto still simmers. Live, the group has a long list of classics to play -- "Shining Star," "That's the Way of the World," "September," and "Let's Groove" among them. Expect plenty of the hits, as well as a huge chunk of The Promise, when Earth, Wind & Fire perform at Scene Pavilion (2014 Sycamore Street) at 8 p.m. Saturday. Tickets range from $29.50 to $59.50; call 216-241-5555. -- Michael Gallucci