An old-time cowboy actor has his moments in the sunset. 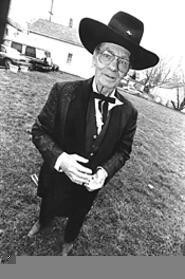 Quick-draw artist William "Shorty" Young can twirl a pistol with the finest of gunslingers, but he can't quite work the same magic with his life story.

It's not that his 67 years lack luster. A former Hollywood bit actor with recurring roles in The Beverly Hillbillies and Gunsmoke, Shorty has fallen gracefully off a horse in many a western and even spent time in a mud pit with John Wayne. Big-shouldered men in buckskin, with names like Sunset Carson and Chief White Eagle, people his anecdotes.

But since he's never learned the art of selective detail, such accomplishments get lost in the telling. The man can't just spin a yarn -- he has to knit the whole sweater. So unless you've got a few spare eons, don't ask him what he's doing in a broken-down section of Cleveland, dressed in a frock coat and bathtub-sized cowboy hat.

You won't get the direct answer: that some years ago, he relocated from the Rockies to the Rust Belt to be with his childhood sweetheart. A resident of West Point, Ohio, he's in Cleveland just for the day, auditioning for a speaking role in Sultana, a Civil War documentary that is being cast at a Storer Avenue studio called Northcoast Stunts.

Instead, you'll get a biopic beginning with his journey through the birth canal of an Apache woman who ended up in West Virginia. "I run away from home just before my 13th birthday," relates the leathery cowhand, who has 19 siblings to speak of. "So would you, if it was your birthday comin' up" and your family was so poor, your present was gonna be your older brother's hand-me-downs. "Well, I got the last hand-me-downs. Told everybody, 'I'm gonna go out to Hollywood, be a movie star.' They didn't believe it."

He stuck out his thumb alongside a dirt road, expecting a farmer to take him to the next hick town. Instead, it was a "big old limousine" that barreled though the dust, pulling to a stop beside his flabbergasted face. The stranger in the back seat turned out to be an uncle he'd never met, a West Coast millionaire named Thomas J. Kordine. "He says, 'Do you know who I am?' 'Yeah, you're a knuckle I ain't never seen before.'"

Uncle Tom was taken with the boy, as was his very tall chauffeur, whom Shorty instantly nicknamed "Tiny." They traveled together to the Hollywood Hills, where Shorty soon found work as a stuntman in serial westerns. His tutors in saloon fighting were Wild West star Bob "Iron Eye" Cody and Mohawk lacrosse champion Jay Silverheels, who wasn't yet famous as "Tonto."

Back in the day when armaments only came in one style -- big, clunky, and heavy -- Silverheels taught Shorty how to draw a gun. "I used to draw it all kinda ways," Shorty says, flipping his .45. "And everybody, they couldn't believe I was so fast."

He also had a knack for falling down three flights of stairs, having learned similar tricks playing cowboys and Indians back in West Virginia. Nineteen siblings make for a pretty rough posse.

But Shorty's education wasn't quite complete. He still needed to master the fine arts of stumbling backward through a pretend glass window made of caramelized sugar and smoking four packs of cigarettes a day. "I even smoked more 'n that, cuz I would light up a cigarette and instead-a just puttin' it out, I'd throw it away on the set," he says. "I'd just toss it over the side. I went through a carton a day." (He's trying to quit right now, by smoking half a pack in the morning and half a pack in the evening.)

On Hillbillies, Shorty played hotel bellhop Shorty Kellems for six episodes, after the original Shorty, George "Shug" Fisher, got sick and left the show. "He was always arguing with Granny," Ray Szuch, head of Northcoast Stunts, recalls of Shorty the character. "She was trying to marry him off to Ellie Mae."

The nuptials never took shape, but Shorty the actor did get punched in the face by Maureen O'Hara in the John Wayne movie McClintock. The stage manager wasn't real clear with his directions that day. "I was s'posed to knock John in the water, but she hit me and knocked me in the water."

In the TV series Gunsmoke, Shorty played "a little bit-a this and a little bit-a that. I was the town drunk after the first episode." He also got "shot" in the head as a posseman in Young Guns and blown off a balcony by Linda Evans in The Gambler, Part II.

As a stuntman, he's been able to give back, though usually not as much as he gets. "There's been some that haven't moved their jaw when I hit."

A few years ago, he took his sweetheart, Janet, to Alabama to try out for a Civil War movie called Andersonville. When the director discovered Shorty's credentials, he tried to give him a speaking part, but the uniform was Union and Shorty only speaks Dixie.

Shorty probably won't make a comeback in Sultana, either, which is being shot almost entirely in Ohio. The film is based on the true but obscure tale of an 1865 riverboat wreck that not only claimed more lives than the Titanic, but also took more hours to sink. Although Sultana features damn cool pyrotechnics and a drowning scene shot in a Lorain swimming pool, it's way too dignified for Shorty, lacking the slapstick, shoot-'em-up qualities that in some small way made him great.

During the cold reading, Shorty's rendering of the somber line, "With all due respect, that's a little like puttin' gauze on a man with a severed leg," apparently sounds too much like Shorty Kellems telling Jethro Bodine where to stick it.

"He's a character all right," observes Ohio director Tom Koba, who's running the auditions. "Yep, he really stands out. Probably a little too much."

That's OK. Maybe the Civil War just isn't Shorty's war. Not to worry. With his gun-handling skills and ability to hiccup loudly on cue, he won't be out of work for long.