Dropgun proves punk rock can grow up without growing old. 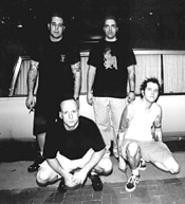 Punk rock was supposed to die before it got old. Its first mantra was "no future," as voiced by the blur of yellow hair and teeth that was the Sex Pistols' Johnny Rotten. "We're the flowers in the dustbin/We're the poison in your human machine," Rotten sneered on the Pistols' classic call to arms, "God Save the Queen." "We're the future, your future."

Two and a half decades later, the future is now, and not only has punk survived, it has gotten a job, moved to Westlake, and sired a whole new generation of Offspring, who've made the genre as ubiquitous among today's teens as Clearasil and lip rings. As is often the case, the rebels of yesteryear have become the authority figures of today.

And no one is more surprised by this turn of events than the old-school punks in Akron's Dropgun.

"Like most kids, I had no idea about the future. I never would have thought that I would be leading the kind of life I lead now," marvels Paul, Dropgun's thirtysomething guitarist. These days Paul's a husband, a cop, and a man who's as entrenched in the middle class as white picket fences and Sara Lee products. Needless to say, that's a long way from his roots in '80s punk and hardcore. Back then, Paul's kind were constantly lampooned on shows like Quincy and CHiPS as dunderheaded hooligans who would never fit in with the rest of society -- or would never care to, anyway. Guys like Paul have invalidated those early stereotypes by growing up, getting jobs, and starting families -- all without compromising the punk ethos.

"You have a way bigger impact by working with or within the powers that be and having a real influence on people's lives than by standing outside the courthouse, shaking your fist at the sky," Paul notes.

He should know. As a punk-rock lifer, Paul's been there, done that. So have the rest of Dropgun: Guitarist-vocalist Tim, bassist Billy, and drummer Chris have been kicking around in various local bands for well over a decade. Though this group has been together for only a couple of years, Tim and Paul have been friends since childhood. Both work for the Akron PD. Their first record together, Shittin' and Gittin,' released last year, is 35 minutes of clenched-fist rock and roll, a shiner in waiting. With Tim's hot-under-the-collar howls crashing into riffs sharp enough to cut glass, Dropgun sounds like Social Distortion dipped in brass.

Despite delivering hard-charging rock and roll that's as authentic as punk gets these days, the band has gotten some flak from scenesters who chafe at the notion of cops invading the underground. Ironically, it's mostly idealistic youngsters, who weren't even alive when these dudes began making the rounds, who always seem to be the most critical. This has long been one of punk's most glaring contradictions: The kid in the anarchy T-shirt is usually the one who's most unflinching about adhering to punk's many unspoken rules.

"I heard there was a band that had a problem with us, and that they canceled a show because of us," recalls Tim, who chooses not to name said group. "I don't get upset about that. It's to be expected, I guess. In the end, all I can say is fuck it. There are dozens of bands that we have played with that don't have a problem with us."

Indeed, most in the punk community seem to have no issues with Dropgun. "If the guys can rock and they're cool, that's all that matters," says longtime Cleveland punk scene veteran Cheese Borger, late of the Pink Holes. "I don't really think there's a punk-vs.-cops kind of thing anymore."

Adds Bob Sablack, drummer for the Chrome Kickers, who've played a handful of shows with Dropgun: "It doesn't bother me one bit. Back in the day, there was a problem [between punks and the police], with bands like Millions of Dead Cops and everything, but these are good guys. I got one thing to say to these kids who hate cops: Try and live in a world without them."

"People should question authority," Paul asserts. "It may sound corny to some, but this country was founded on rebellion and questioning the powers-that-be. People in authority are human and make mistakes, and I have a deep understanding of that, believe me.

"But being blindly anti-authoritarian about everything is juvenile and unrealistic," he continues. "A lot of those people in authority are making sure that your trash gets picked up, that your water, gas, and electricity are piped into your house, that your mail gets delivered. These are not bad things."

Neither is this band.