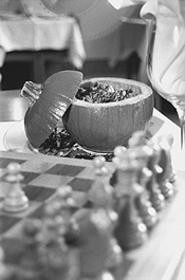 Okay, I admit it. I wasn't exactly looking forward to my dinner at MacLaren's Cuisine. A lunch visit in early September had left me unimpressed. Relatively large price tags on dishes that seemed oddly conceived and haphazardly executed, accompanied by uninspired breads and desserts from commercial bakeries, served by an inexperienced and uninterested waitstaff, gave me little to cheer about and no reason to want to rush back.

So it is with real pleasure that I can say, after two recent dinner visits, that things are looking up at this attractive little suburban bistro. And while conceptual problems remain, the kitchen seems to be turning out more hits than misses, including some dishes that are very good indeed.

Chef/owner Greg MacLaren opened his tiny Twinsburg restaurant in late May and admits his first menu was a rush job. In late September, with a few months of operation under his belt, MacLaren launched a revised autumnal menu, began using nearby Great Lakes Baking Company as a source for marvelous French bread, and took the time to start polishing his serving staff -- all improvements that have moved him closer to his goal of providing a fine-dining venue for updated versions of American and European-inspired classics.

The current menu is large -- perhaps too large for such a small dining room -- with several raw-bar selections; more than a dozen soups, salads, and appetizers; 4 pasta dishes; and 11 entrées. At lunch, a handful of sandwiches also appear. Many of the items -- like meatloaf of veal and wild boar, venison-and-sour-cherry strudel, and a pâté platter -- are seldom found on area menus and seem custom-designed for crisp autumn evenings. However, there also is more than a little repetition in ingredients, with venison showing up not once, but twice, and wild mushrooms, pumpkin, smoked bacon, and a variety of cheeses being downright ubiquitous.

Nonetheless, a bowl of thick pumpkin soup was a true seasonal delight. Creamy and mild, the chicken-broth-based soup, with a hint of curry and apples, was fittingly served in a compact, shiny orange pumpkin shell and sprinkled with a few crisp toasted pumpkin seeds. A crock of traditional French onion soup was also just right: beefy broth thickened with plenty of well-caramelized onions, two big French-bread croutons, and a mound of melted sweet and nutty Gruy&eagravere cheese.

Equally pleasant was a copper bowl filled with a dozen delicious littleneck clams (the smallest of the Atlantic hard-shell clams, known for their chewy, mild-flavored meat) floating in a fragrant, buttery clam broth that brought back poignant memories of the sea. The dish got an unusual twist from a large, chunky corn cake -- made with roasted sweet corn and bits of red pepper, bound together with bread crumbs and egg -- that had been precariously balanced on edge inside one of the floating clam shells. Once we accepted the fact that it was going to be impossible to keep the corn cake out of the broth, we shoved it in and enjoyed the sweet taste and crunchy texture that it lent.

While we ate, we admired the changes MacLaren has made in the former Sprouts. Gone are the hard concrete floor and trompe l'oeil paintings that made the spot seem like a noisy Mediterranean courtyard. Instead, the floor is now covered in what looks like blond hardwood, and the walls are painted a neutral shade of cream, with green trim, as a backdrop for extra-large European advertising posters. While the dining room holds only about a dozen white-linen-draped tables, they are well-spaced and crisply appointed with silver chargers and crystal stemware. A small, blond wooden bar is tucked into one corner of the room, and several strategically placed mirrors help open up the small space. Plenty of sunshine during the day and dim lighting augmented by twinkling candlelight at night give the bistro a welcoming appearance at any time.

However, if the kitchen's use of certain ingredients struck us as repetitive, what were we to make of all the hollowed-out pumpkin shells that doubled as serving bowls? We were initially charmed when our pumpkin soup arrived inside a pumpkin. But the luster was wearing off this particular conceit when a serving of pumpkin gnocchi appeared in one also. And even that seemed less strange than when our pork chops and a mound of mashed sweet potato was presented in a pumpkin too! In fact, in one meal, a single companion and I racked up three pumpkin-shell bowls between us -- a gimmick that, by that time, was beginning to seem silly. (When I asked our very serious server if they washed out the shells after every course so they could reuse them, she was only partially convinced that I was joking.)

Still, both pumpkin-encased entrées had their charms. The Ohio City Pasta-made pumpkin gnocchi -- little "knots" of tender, pumpkin-flavored pasta -- were perfectly done and delicate. Tossed in a maple-flavored brown butter and topped with caramelized walnuts, the dish was frankly, but not overpoweringly, sweet. In fact, with its starch and sugar, it brought to mind a big, cozy bowl of sweetened oatmeal, all of which suited my companion, an enthusiastic diner with a sweet tooth, to a T.

The two long-boned, grilled pork chops in a thick ancho-and-plum barbecue sauce were tender and juicy, and took well to the fruity and, in spots, fiery flavors that coated them. A side of crisp cabbage slaw accented with julienned apple, in a tart dressing, made a nice complement to the meat. However, an accompanying mound of off-the-mark "balsamic sweet potatoes" had lost most of their pleasant natural flavor to the acidic overlay of the vinegar and were disconcertingly sour.

Two other entrées, served sans pumpkin shell, were delicious if not altogether as anticipated. A veal-and-wild-mushroom pie was a huge platter of savory veal stew -- meltingly tender cubes of white meat accented with bits of carrots and wedges of buttery red-skinned potatoes, in a thick, thyme-flavored gravy, topped with a rectangle of flaky puff pastry. The kitchen uses a mushroom stock in the stew, and the earthy flavor of the fungi was apparent. However, we missed the presence of actual mushrooms in the stew that night, due to an apparent staff oversight when the dish was assembled.

An entrée of potato-and-bacon-crusted walleye also seemed to have some conceptual difficulties. True, the menu description did say that the large filet of mild, perfectly done white fish, in a crisp and savory crust of shredded potatoes and bacon, would be served "over a steaming bowl of sweet corn chowder," but that still didn't prepare us to find the fish floating in the chowder, where, as expected, it didn't stay crisp for long. In fact, as the fish and its savory crust melted into the liquid and became one with the thick, sweet, and creamy chowder that enveloped it, what we had before us could have been better described as corn-and-walleye chowder. From a flavor perspective, this was not at all a bad thing. However, fastidious individuals, who strive to separate their fish from their soup, might take this hard.

A few other things also bother us about MacLaren's. Desserts, limited to apple or pumpkin cheesecakes on the night of our visit, continue to come from outside sources rather than being housemade and are not especially in keeping with the rest of the menu. Servers, although sincere in their efforts, still seem amateurish -- slow to remove soiled dishes and oblivious to the "crummy" condition of our table after we tackled our pastry-topped veal pie. And the menu, a tome of 12 pages complete with table of contents, is full of stories in which the owner reminisces about his days in Paris or nights at a northern Ontario fishing lodge. These tales fall flat, since, as many of us can sadly testify, one's own life stories are never as interesting to others as they are to oneself. And while generous guests will surely see these tiny vignettes as a harmless eccentricity, in reality they interfere with the true business of a menu -- providing a readable description of the food, so diners can make an informed decision before plunking down their hard-earned bucks.

And this brings up one final concern. For a spot located on the edge of a light-industrial park, in a building that is shared with a car dealership, MacLaren's prices -- more than half of the entrées priced at $20 and up and even dinner salads costing as much as $8 -- seem high. While some residents of Hudson and Twinsburg have a reputation for owning deep-pocketed suits, will they flock here to drop 50 or 60 dollars a head for drinks, appetizers, entrées, and desserts, when that same money can buy them a meal at a swank, polished, and thoroughly refined downtown dining room? Maybe not.

Still, if it is not yet truly sophisticated, MacLaren's has potential. The interior of the restaurant is lovely, and, with careful attention to one's selection, it is possible to dine here at a reasonable price on interesting and delicious food. With a tighter menu, better service, and more true savoir faire, MacLaren's Cuisine may still become the upscale bistro that it wants to be.