The city's assault on billboards has one media company crying foul. 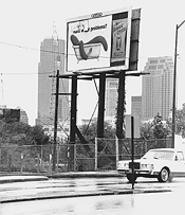 The area's largest billboard company, whose job is to turn heads, is upset by all the attention its signs are generating these days.

That's because the new interest is coming from the City of Cleveland, not passing motorists.

Last month, the city hit Phoenix-based Eller Media with 199 zoning and building code violations against billboards located throughout Cleveland neighborhoods. The violation notices were generated during a summer-long inspection of freestanding billboards, as part of a new city effort to inventory the locations and owners of outdoor signs and to monitor their condition.

William Platko, Eller Media's Cleveland president, says the number of violations his company received adds up to selective enforcement of the law. "We have never been hit with violations like this," he says of the amount and scope of notices. "This is retaliation by the mayor for the lawsuit we filed against the city."

Mayor Mike White has long accused billboard companies of placing a disproportionate number of billboards -- particularly those advertising alcohol and tobacco -- in the inner city. To counter, the mayor backed a 1988 ordinance banning advertisements for alcoholic beverages on billboards in Cleveland neighborhoods -- a move that drew a legal challenge from Eller Media last February.

Eller Media's federal lawsuit contends that the ordinance violates the company's First Amendment rights to control the content of the messages it displays on public billboards. At the time, White vowed to "vigorously oppose" the lawsuit, whose case file is now nearly a foot thick with legal motions filed by both sides.

Linda Hudecek, director of the Community Development Department, which oversees billboard inspections, denies that the crackdown is related to the lawsuit. She says the new inspection process is part of the mayor's ongoing effort to reduce visual blight in the neighborhoods. "This [inspection process] was a reaction to the mayor driving through the neighborhoods and saying, "Residents shouldn't have to look at all this,'" explains Hudecek. "We are trying to raise the bar for how companies treat Cleveland. Nothing irritates and angers the mayor more than when people treat Cleveland differently than they would Shaker Heights."

In addition to increased monitoring of billboard structures, the White Administration is preparing a new ordinance that would require annual registration of all billboards with the city's division of Building and Housing. Though it would require only a nominal fee, the measure is not likely to sit well with outdoor advertising companies, which currently only need a one-time building permit to erect a billboard.

Since receiving the violation notices one month ago, Eller Media has not begun to correct the violations, complaining that city inspectors failed to spell out exactly what is wrong with each billboard and would not clarify confusing notices or allow company representatives to speak with building inspectors. "Not one citation relates to safety issues. The issues are vague in defining what the problem is," Platko says.

Not so, says Hudecek, explaining that the violations fall into one of several broad but obvious categories that have to do with clear-cut zoning and permit laws, the condition of the billboard structure, and the property on which it sits. Furthermore, Hudecek asserts, the city outlined for Eller Media specific improvements -- such as grass cutting or painting -- that would remedy the violations. "We tried to make it simple for them," she says.

Included in these violations were six notices to remove billboards that the city claims are illegally on its property. While county records show the properties in question are owned by the City of Cleveland, Eller Media says the billboards are not actually on those properties, but are on nearby or adjacent parcels. "[Their properties] are close, but these are not ours," says David Yale, Eller Media's vice president of public affairs, whose staff produced its own property maps showing the location of their billboards. (Short of an independent survey, the precise billboard locations will likely remain in dispute.)

Eller's recalcitrance notwithstanding, Hudecek says the city is standing by its assessment and will continue to pursue all of the violation notices. In a letter last month to Paul Meyer, Eller Media's company-wide president, the city threatened to demolish the billboards on city property after three days, adding that it would charge the company rent for each day its billboards had been on city property.

The bickering between the city and Eller Media sounds all too familiar to Meg Maguire, president of Scenic America, an advocacy group that works to preserve scenic byways and has become the leading national voice against billboard companies.

"It is very typical of the billboard industry to get away with what they can and then quibble over the details, and absorb the energies of everyone involved," says Maguire from her Washington, D.C. office. "The whole phenomenon of keeping boards up as long as they can through [legal] maneuvers -- that is the industry pattern."

A meeting two weeks ago between Eller Media and city officials, called to discuss the specifics of the violation notices, ended in a stalemate. In the meantime, the billboards remain a part of the city's streetscape.

Mark Naymik can be reached at [email protected].