Devotchka Turns Into A Sensation Thanks To A Ray Of Sunshine 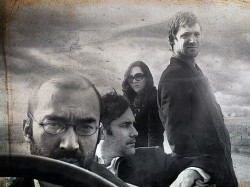 "Was it fate? Was it games of chance? Are we victims of the circumstances," asks DeVotchKa's founding frontman Nick Urata on "Blessings in Disguise" from the band's latest album, A Mad and Faithful Telling. He could be talking about his group, whose recent success was built over a decade.

Currently on a mini-tour dubbed the Oddity Faire (with Les Claypool, Saul Williams and Secret Chiefs 3), the Denver-based multi-instrumental quartet offers a pan-global gumbo, blending gypsy, cabaret, rock, folk and baroque pop - like Gogol Bordello on a date with the Decemberists. Their cleanly coiffed and manicured sound has an irrepressible ramshackle charm that pushes to the forefront of their vaudevillian dramas.

But despite multiple well-received albums, DeVotchKa might be no more than a musical footnote if not for their work on the Grammy-nominated soundtrack for 2006's Little Miss Sunshine. First-time directors, Jonathan Dayton and Valerie Faris, heard the group on KCRW, a prominent NPR station in Southern California. The film didn't just raise the band's profile in the U.S.; it turned them into world travelers.

"Seeing that 20th Century Fox logo and hearing my tune right after it - that's a once-in-a-lifetime kind of a thing," says Urata. "It's been nine years, but it felt like a slice of redemption to go to places like Turkey and Poland and have people singing the lyrics and connecting with you as people."

Like many well-meaning parents, Urata's folks tried to discourage him from pursuing a career as a de facto beer salesman. They told him that no one made a living making music, so he explored writing and journalism in school.

"I dabbled here and there, then I said screw it," recalls Urata. "It seems sort of daunting when you're young and you've never stepped on a stage, but little by little, you get up the nerve at coffee shops and parties, and then you're hooked."

He was a sideman in a variety of combos around Chicago, including the Reejers, who had major-label interest, but Urata, the grandson of Italian immigrants, had other things on his mind. His grandfather played in swing bands in the '40s, and he heard plenty of ethnic music in the house growing up. When he moved from New York to Chicago for school, he settled on Cicero Avenue, in a working-class area bridging Polish and Mexican neighborhoods. He'd hear polka and mariachi music coming out of cars, and the idea of cross-pollination bloomed. He found a commensurate spirit in Jon Ellison, so when Ellison moved to Boulder after they'd collaborated for a while, Urata followed.

"I always sort of fantasized about this sound," says Urata. "I didn't know how I was going to get there. But I had a vision of it; it's part of the reason I never settled for those other bands I was playing in."

Ellison was one of many who passed through DeVotchKa over the next few years, as Urata maintained an open- door policy, allowing anyone who wanted to play to join. He encouraged members to try new instruments. This would lead to their current arsenal: accordion, tuba, violin, upright bass, theremin, trumpet, guitars, drums and keyboards. After about three years, Urata settled on a trio of bandmates who were as dedicated as he was. "I'm using lots of horns and accordions, and I always had a penchant for vintage clothing, so I had the rest of my band dress to the nines," says Urata, recalling how a burlesque promoter offered them their first big break. "They liked our style and versatility, and invited us to start being the house band for the show. We ended up taking it on the road and playing in front of thousands of people. It was a great thing. We'd have these packed houses of people that came to see scantily clad women, and they'd leave with our CDs in their hands."

The experience helped cement DeVotchKa's sound. "It was sort of leaning toward that vaudevillian drama, and that solidified it and validated it for us," he says.

It also afforded them the capital to record and release three studio albums and a live CD themselves, the last of which, 2004's How It Ends, boasted a title track that enticed Little Miss Sunshine's directors. Profile successfully raised, the band signed with Epitaph imprint Anti- for last year's A Mad and Faithful Telling.

It's the fullest, sharpest and most assured of the band's releases and, says Urata, the album he's been waiting his whole life to make. Its cohesion and polish owe a significant debt to better circumstances and reinvigorated spirit.

"Every other recording has been done under extreme pressure for time, and we had a little breathing room this time, so we took it," recounts Urata. "Because we couldn't afford studio fees [in the past], we would have everything pretty well locked and loaded ahead of time. This time we were able to relax a little bit. And part of that was the attitude, 'It's been a long time - fuck it, let's just do what we want.'"