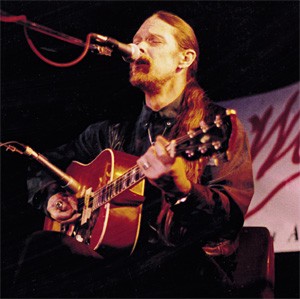 Shawn Phillips feels like crap. Just five dates into a five-month tour — and that nasty super-flu destroying most of the country caught up with the cult singer-songwriter. "I lost my falsetto the day after I played Cedar Rapids [Iowa]," he says.

Phillips sounds noticeably fatigued. He's also far from his home, which nowadays is Port Elizabeth, South Africa — where by day, he's a navigator and "extrication specialist" for the National Sea Rescue Institute. Yet there's no killing the man's enthusiasm for discussing his recent forays into modern classical composition. Phillips has nearly completed a ballet based on Immanuel Velikovsky's controversial Worlds in Collision, an alternative history of our solar system. "Any good astronomer will tell you that his tale is full of bullshit," says Phillips, with a twang betraying his Texas roots. "But the fact is, it's a great tale."

Back in 2006, the Nashville Symphony premiered Phillips' first completed work, Disturbing Horizons: Events in the Life of a Prince. "They thought they were going to be playing song arrangements for a singer-songwriter," recalls Phillips. "Then suddenly we laid this nine-movement suite on them that has all the complexities of a Bach concert."

That, in a nutshell, is the story of Shawn Phillips. For the past 40 years, he has been, in the words of legendary Fillmore impresario Bill Graham, "the best-kept secret in the music business." Although embraced by critics, who originally lumped the masterful 12-string guitarist in with the folk revival and later the singer-songwriter movement, Phillips' progressive blend of rock, jazz, blues, country, world, and modernist experimentation has always been too extreme for the mainstream.

Besides, Phillips is more famous for the rock and roll stories he can tell than the music he makes. Like Woody Allen's Zelig, he pops up in too many historical footnotes to count. Let's list the Top 5:

5) Opened the landmark Isle of Wight festival in 1970.

3) Schooled George Harrison on the sitar.

No. 1 should be Phillips hooking up with big-screen hottie Francesca Annis (who let it all hang out in Roman Polanski's 1971 adaptation of Macbeth). But let's go with him sharing a flat in England with Paul Simon and Donovan in the mid-'60s. To this day, Phillips claims he co-wrote a healthy chunk of the latter's psych-pop classic Sunshine Superman. The dispute has never been resolved, yet when listening to the kaleidoscopic acid folk of Phillips' early albums — most notably 1970's Contribution, which features Steve Winwood and Traffic — it's hard to hear how Donovan wasn't influenced by his ex-roommate.

Phillips crafted some difficult music when he was signed to A&M Records during the '70s. Most of his albums are expansive, collage-like soundscapes, full of fevered jamming that borders on the claustrophobic. There are 7-minute songs, 13-minute songs, and songs with no discernible lyrics — just Phillips strumming furiously while exploring the outer reaches of his three-octave range with all the sculpted glory of an opera singer.

But Phillips never submerged his talents in ear-bleeding atonality. Adhering to a conception of beauty that's really quite classical, the dude beams pure white light. Although he has that gritty down-home accent, Phillips litters talk of artistic creativity with phrases seemingly lifted from Buddhist texts and Gnostic thought: "My music has to carry that life force and energy," "I equate the force of music with divine energy," "There's this tremendous energy force that drives consciousness," and so on.

That's kind of ironic, considering that Phillips' fusion of symphonic grandeur, technical wizardry, and rock and roll adrenaline sounds like a long-lost ancestor of progressive metalheads like Iron Maiden and Judas Priest. His music might be positive and often joyous, but it's also aggressive — in both concept and execution. With that attitude, there was no way he'd make it out of the '70s with a major-label deal.

Even though he turns 65 this year, Phillips hasn't surrendered any of that intensity; a new DVD proves this. In Living Contribution: Live at Kirstenbosch Gardens, he rocks out at the foot of an exotic, fog-covered mountain in Cape Town. Like Bob Dylan, Phillips performs older material, but isn't a slave to it. In addition to fan faves like "Ballad of Casey Deiss" and "L Ballade," he unloads a small basket of new jams.

That said, Phillips can see himself — after roughly 20 albums since 1965 — abandoning the singer-songwriter thing for modern classical music. "I still write songs, but they're few and far between," he admits.

And herein lies another one of those little nutshell truths: Phillips will go down in history as a musician's musician. Yet looking back on the era from which he emerged, few artists have stayed in touch with a '60s-bred ethos such as constant exploration or never-ending evolution. "It seems to me that a lot of musicians, once they get past the ability to [ring] the cash register, they just kind of give up on the music," he says.

Luckily for fans, Shawn Phillips never made his way to the checkout lane.