At the bottom of the ocean lies a worthless Blue movie. 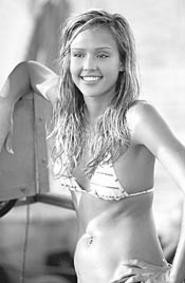 Into the Blue offers precisely what one would expect from the director of Blue Crush and the writer of Torque: beautiful stupidity. Its every frame dripping a noxious combination of suntan oil, summertime sweat, and salt water, this heist movie (or whatever it is, which isn't much) delivers a precise, test-marketed amalgam of X Games tomfoolery, Travel Channel cinematography, and Playboy Channel wankery. Which is to say, it's made not for the grown-up audience, but for a demographic more likely to be engaged by the crack in Jessica Alba's ass than whatever she's doing with her mouth (delivering dialogue, I'd dare say, but that's merely a guess). Mind you, there are plenty of older men for whom Alba's tush is a thing to be coveted, just as there's an audience of women for whom the sight of Paul Walker's glistening pecs conjure daydreams of getting all kinds of grooves back. But not in a long while has something arrived in theaters so perfectly, deliciously, and vacuously packaged. Its arrival also heralds something new in movie marketing: the summer flick arriving in October, a brain-dead alternative to the highbrow fare chasing golden statues.

Its sole flaw, when graded on a curve (or curves, in the case of its mostly-nude-most-of-the-time stars), is its turgid first half; Into the Blue drowns before it even surfaces. The first hour is so deadly dull that when it finally does pick up a head of steam, when writer Matt Johnson and director John Stockwell toss at you two bad guys and a shitload of sharks, you couldn't care less. The movie's already run out of oxygen, and you're stranded 100 feet below, holding an empty air tank. You'll have lost all interest in figuring out who's who, what's what, and what's that (after all, it's never easy to tell what's going on during underwater fight sequences, which tend to get obscured by bubbles and water). How much you care at all depends a great deal upon how much you care about Alba's ass, which spends most of the movie's second half covered up entirely. Pity. Just when things were getting so exciting.

No matter. Stockwell can always rely on Ashley Scott as party gal Amanda; her behind is always up ahead. Indeed, in one astonishing shot, Stockwell appears to pay homage to Kids and Bully director Larry Clark, a dirty old man often mistaken for genius by those who think it daring to show preteen skin. During one excruciating underwater sequence, when Walker and Alba and Scott Caan are trying to lift from the sea the remains of a mythic lost ship, Stockwell, for no reason at all save to distract us from the doldrums, cuts to two pointless shots of Scott's gold lamé bikini riding up her ass as she suns herself on the boat above. And he shoots her from behind, too, like some letch grabbing a sneaky peek, just before he dives back into the deep blue to show off his booty to his buddies. It's all so . . . unbecoming.

You will walk out of this movie with but one question on your mind: How is it that Paul Walker manages to hold his breath for three, four, sometimes even five minutes at a time, even when he's fighting off bad guys half a mile beneath the sea's surface? The dude is friggin' Aquaman. As for the movie itself, which goes from having no plot during its first half to having three films' worth during its second hour, it's only there as an excuse -- because Hollywood movies need one, though for reasons that become more obscure with each passing day. (A plot, you see, is what keeps it from becoming art-house fare, though if a movie like Into the Blue were more honest about its intentions, it would go the 9 Songs route and just get to the gettin'-it-on part, and dispense with its familiarly flimsy tale.)

The film begins with the crashing of a plane into Bahamian waters -- mere feet, it seems, from the shore, though nobody notices, till one day tourist dive-jockey Jared (Walker), his first mate, Sam (Alba), his best bud, Bryce (Caan), and Bryce's girlfriend, Amanda (Scott) find its carcass while day-tripping in the warm waters. Of course, the plane's carry hundreds of kilos of coke, which belong to a thickly accented, run-of-the-mill, drug-dealing baddie (played by James Frain), who wants his merch back.

But Frain, a good actor with better taste, saddled here with the generic name of Reyes, doesn't even show till the last hour. Till then, the movie's all about Jared's obsession with finding a sunken ship that was once the vessel of a runaway-slave-turned-pirate and is said to contain millions in gold bullion. Since Jared and Sam and their pals can't afford to go looking for the wreck on their own, Bryce and Amanda decide to fund their endeavor by selling the coke they found to Reyes, not knowing it was his (and that of his even more crooked partner, whose identity remains a mystery till late in the game) in the first place. You can see where all this is going, right? Riiight. Right into the deep blue nothing.