Race and outrage on the Kent sorority scene. 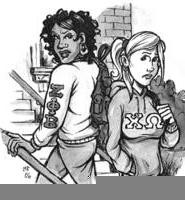 Chi Omega sits atop a steep, sled-friendly hill near the Kent State campus, slightly removed from the other sororities. Inside, a private chef prepares dinner for girls in rolled-up sweats. Some are eating handfuls of cereal from the box, while others update online profiles, Kelly Clarkson bouncing from their iPods.

It's a safe, cozy world, not much different from the Laura Ashley homes most of them grew up in. They have cable and a live-in advisor they call Mom. They say "love ya" a lot and borrow each other's clothes. Like most close friends, they have their own languages and inside jokes. So they just don't understand how one small, admittedly thoughtless comment would cause the rest of the campus to peg them as racist and seek their expulsion.

"It's all spun out of control," moans Chi O President Marisa Stroud.

But this year, the sisters were stumped by Keri Nietupski, a strawberry blonde known for her tendency to be late for everything. So they consulted her boyfriend, who liked to say that Nietupski reminded him of his mother, a strong, empathetic black woman. He thought for a moment, then suggested they give Keri the "blackest" sorority member award. It would be their inside joke.

On a Saturday night in April, they sat down at Kent State's banquet hall for an evening of grandeur and amaretto sours.

Candice Poole, a premed student with cheekbones as defined as her opinions, was catering the event. She's the treasurer of her own sorority, Zeta Phi Beta. With only 10 members, it isn't big enough to have a house; meetings are held in the student center.

Then she heard the honor for "blackest" member. She watched a white girl walk to the podium while the rest of the all-white sorority stood cheering.

"Did they just say what I think they said?" she asked in disbelief.

The co-worker nodded. Poole felt sick. They were treating her culture as a joke, she believed, and it wasn't funny.

It had taken her a long time to become comfortable in her skin. At mostly white Tallmadge High, teachers scolded her by saying, "You're a disgrace to your race." Now that she'd gained confidence, she wasn't going to let these white sorority girls treat her as a punch line.

After work, she ran into a Chi O member at a Kent bar. Casually, Poole asked the girl, "So, what's up with this blackest sorority member award?"

The girl looked at her. "Oh, you mean the ghetto Omega award?" she asked.

Poole was confused. "Is that the blackest sorority member award?"

Poole suddenly realized that there were two awards -- both offensive.

She called Patrice DeLeon, the president of her sorority. DeLeon was outraged. "If this were some sort of private joke, then it should have stayed a private joke," she says. "It shouldn't have been announced in front of 200 students on Kent State's campus."

DeLeon called two other black organizations on campus. They reported the incident to the head of the campus Greek organization and contacted the school newspaper. When the story hit the newsstands, Kent State detonated.

Associate Dean of Students Sheryl Smith put Chi Omega on suspension, canceling its activities until the matter was investigated.

One Chi O member reported that she'd been spat on by a black student. Another said black students threw rocks at her. One sorority member called the cops to report that a couple of students had thrown a bucket of water on her -- even though she wasn't in Chi O. The girls stopped wearing their letters around campus.

They apologized and asked for forgiveness. "We made a mistake," says Stroud. "We never should have given out the award. There was a miscommunication among the sisters, and we understand how it could have offended people."

But what they don't understand is the sudden hatred. They wonder why students aren't looking at all the good things they've done, like the thousands of dollars they've raised for their charity. "Some people are stereotyping us," says Stroud.

They do have support, expressed in chalk on their driveway: Delta Gamma loves Chi O, Delta Tau loves Chi O. Even Poole doesn't believe the award was motivated by malice. "They weren't thinking," she says. "They thought it was a joke, and they didn't expect the reaction they got."

She blames it on sheltered lives. "They're naive. They haven't had to enter the real world yet."

And it's likely that Chi O would have walked away from the incident -- if it hadn't kept compounding its blunders. At one point, a member e-mailed her African American studies professor, explaining that she couldn't come to class because she was scared of being harassed by Zeta Phi Beta and other black students.

But instead of dealing with the student directly, the professor ratted her out, handing a copy of the e-mail to Zeta Phi Beta. This prompted a whole new round of outrage.

The author of the e-mail admitted that she'd never actually been harassed by anyone. She mentioned Zeta Phi because she'd seen the name in the newspaper.

Poole was furious. "Don't drag my organization through the mud just because you feel uncomfortable," she says. "Don't make up lies about being harassed."

To the rest of the campus, however, the outrage has subsided. "The Chi Omegas apologized, right?" asks Ashley Jones, a black student munching on fries in the cafeteria. "So why isn't everyone over it yet?"