The Z-Boys roll into Dogtown again, and truth is cooler than fiction. 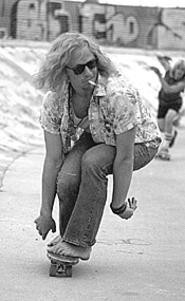 Lords of Dogtown is an odd, disorienting commodity -- a fictional version of a documentary (Dogtown and Z-Boys) about the birth of skateboarding in 1970s Venice, California, that was written by the man who directed said doc, in which he was a central figure. Stacy Peralta, whose Dogtown and Z-Boys now serves as a demo tape for this new feature, is fast becoming one of those guys you find in a neighborhood tavern, who keeps regaling patrons with stories of ancient glories. He just can't stop talking about those good ol' days when he and Tony Alva and Jay Adams and Skip Engblom and Shogo Kubo (and on and on) were suntanned young gods riding their wooden decks into the golden sunrise, courtesy of the skateboard magazines of the 1970s, which ran action-packed pics of SoCal kiddos laying tracks in drained swimming pools. You're tempted to shove him off his stool and order him not to return till he comes up with a new rap. (And, no, Riding Giants, Peralta's 2004 documentary, doesn't really count, since it's about the history of surfing, the sport that spawned skateboarding.)

One could almost understand the existence of Lords of Dogtown had Dogtown and Z-Boys -- narrated by Sean Penn as though he'd never stopped playing Jeff Spicoli -- been somehow deficient in its telling of the tale. But it left out nothing. These guys were self-mythologizing long before anyone outside their circle knew their names, documenting their exploits in words, photos, and movies that provided the fumes huffed by a nation of teen boys in the late 1970s. Peralta's doc perhaps reclaimed their legacy, after years of Gen-X Games newbies celebrating Tony Hawk as their own personal Jesus, but it need not go further. Fiction has nothing on fact, no matter how tricked-up and sexed-up its translation. But with Peralta there is no end of story, only more of same -- this time with pretty young (and often shirtless) boys named Emile Hirsch, Victor Rasuk, and John Robinson playing the parts of boys who became poster pinups, who became middle-aged zzzzzzz-boys long, long ago.

We're now six years into this overload of self-worship, which began with the May 1999 publication of a Spin article titled "The Lords of Dogtown," the first in a tidal wave of stories about the exploits of these kids who used skateboarding as a way to either escape their troubled, torn-up homes or pretend they were tougher than their soft, middle-class upbringings. What's doubly troublesome about Lords of Dogtown is how it feels like a repeat for all concerned. Chief among the perpetrators is director Catherine Hardwicke, whose wildly overrated debut, 2003's Thirteen, played like a teen-sex public-service announcement made by a palsied Larry Clark. Hardwicke's good with the look-at-me shot: In one scene, shot beneath a spotlight in an alley that's barren save for a lone discarded couch, Hirsch's Jay Adams appears to have taken a wrong turn and wound up on a Broadway stage. Yet when Rebecca DeMornay shows, playing a haggard single mom trying to make the best of it for her corruptible young son, Jay, it feels as if she's just repeating dialogue uttered by Holly Hunter in Thirteen. One can't help but watch this and lament the fact that we've been here before . . . and before . . . and before.

And yet none of this would matter if Lords of Dogtown were something special, something that transcends its marking the end of an era of self-deification for Peralta (played by Robinson) and his pals, chief among them Alva (played by Rasuk, the Victor of Raising Victor Vargas) and Adams (Hirsch) -- the former still selling his own line of decks, the latter confined to Hawaii (poor guy) after serving prison time for drug-trafficking. Lords of Dogtown, though, plays like docudrama soft-served up like some movie of the week, with its on-the-nose dialogue ("If we built a decent skateboard, we could make a fortune") and troubled-teen scenarios, in which good kids go bad when there's no daddy around to play catch-a-wave. It may all be true -- more or less, since Peralta invents some characters out of composites and ditches other key figures altogether, and gives the movie an awful feel-good finale that never happened. But that doesn't diminish the icky feeling you get from being manipulated by a screenwriter who exalts his younger self and the director who's been pals with the screenwriter for years. A little distance -- a little perspective -- would go a long way.

The movie does have one thing going for it: Heath Ledger as Engblom, whose surf shop was the center of the Z-Boys' world and whose Zephyr team of skaters brought punk rock to a soft-pop sport. His mouth full of big fake teeth and his head full of haze, Ledger plays Engblom as though he's imitating Val Kilmer's appearance as a stoner guru on Entourage; you can practically smell the reefer on his breath. After trying to prove himself a serious actor in deadly dull movies, Ledger lightens up and brightens up a movie that attempts the trick of bringing a new spin to an old story, but can't pull off the stunt.