The Kids in the Hall are all grown up after a few years of the silent treatment. 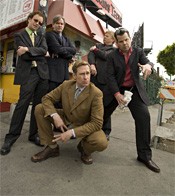 After a six-year hiatus, sketch-comedy cult heroes The Kids in the Hall are reuniting tonight in Cleveland with a surefire arsenal of social satire and absurdity in Live as We'll Ever Be. "The excitement and creativity is what brings us back together," says Kevin McDonald, who helped form the troupe in 1984. "Doing the new material this time around, it's been like a throwback to our days at the Rivoli." That's the Toronto club where the quintet first bubbled to the surface before signing a deal with both the Canadian Broadcasting Company and HBO, for which they produced five critically lauded seasons of their comedy show, which aired from 1989 to 1994. "I think the only reason we can tour to these wild, screaming crowds is because of the reruns," laughs McDonald about the series' second life on Comedy Central.Their latest tour features the return of classic characters like the Chicken Lady and Headcrusher. Any chance of a reunion after the reunion? "It'll be a funeral for one of us," says McDonald. "The other four will get together later for drinks, have a few laughs, and say, 'That's probably it.'" See them while you can at 8 tonight at the Palace Theatre, 1519 Euclid Avenue. Tickets are $39.75. Call 216-241-6000 or visit www.playhousesquare.com.
Sat., May 31, 7 p.m., 2008