The mystery behind Britney Spears's appeal with chicks who should know better. 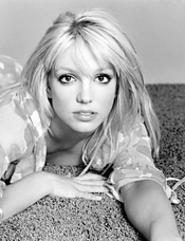 A few weeks ago, Total Request Live (MTV's neo-American Bandstand) broadcast the "Top Ten Britney Spears Videos of All Time." Viewers were treated to an hour-long smattering of The Many Faces of Britney, from her humble pigtailed beginnings to the sweaty, balls-out humpfest "I'm a Slave 4 U." There were bare-midriff tops, a dance troupe clad all in white forming an aerial heart on some beach somewhere, GQ guys with Bad Dance Face, and -- of course -- there was Britney's ass.

Somewhere in America, some girl wearing a Skynyrd shirt in an unironic way was thoroughly enjoying all of it.

No one in recent memory has caused such a steady ripple through pop culture as Ms. Britney Spears, largely due to the oddly enduring ubiquity she's had over the last three years. But there's more to it than that. Pelvic-thrusting her way into the hearts of fans of every musical genre, she always seems to elicit a response, including particularly obsessive ones from the ladies -- especially feminists. This is really no surprise: Any teenage girl wearing her so-called "virginity" like a big sexy sandwich board will be analyzed and skewered accordingly by any self-respecting women's studies major.

Why is it, though, that punker girls, indie-pop queens, and rawk chix alike, regardless of political stance, are so into Spears as well? Girls that really like punk, know about rock, and have record collections bigger than their dads' aren't supposed to give a fuck about Britney Spears's new Pepsi commercial. (At least, they're not really supposed to show it.) Buying and supporting generic, new-school pop music drains the hell out of any music lover's credibility faster than you can say "I'm not a girl, not yet a woman" (at least according to rock elitists). So what's wrong with Britney Spears alongside Television in the record collection? Why do girls who usually laugh at mindless pop-culture trends get a shameful rush of girlish glee when Britney's new video comes on? Why such heated conversations about her latest commercial endeavor? Why did I go see Crossroads and cry because I was so proud of Britney?! -- uh, why did other people do that, rather?

Part of it is a natural fascination with Britney's mystique. She says she's a virgin. She can't be, but for some reason, people want to believe that. When she sings "I'm not that innocent," most people are like "Riiiigggghhhht." She once performed in Rio de Janeiro and left her mic on backstage, treating the audience to an indignant barrage of Louisiana-twanged exclamations of "Fuck!" and "Retarded!" It was like a breath of fresh air -- finally, something came out of her mouth that wasn't written by that fat guy in Sweden. There must be a dirty "story behind the story" with this myth she's created around herself, and every time she appears on television, there's a chance that some truth can be unraveled. When she's interviewed, one hopes that something will slip out that may give us remote details about her sex life, drinking and drugging habits, penchant for running with scissors, or -- the most anticipated -- some self-awareness of her role as teen beat-off queen.

Britney's also got that envy factor. Hours could be spent in front of HBO, eyes glazed over from too many almost-nipple shots, dry-humping, hot oil, and bedroom-eyed writhing; and punk-schooled, fat-positive female viewers just keep staring at this supposedly hated "Barbie-doll beauty standard," wanting more and more, despite their better judgment. Girls like watching people they can never be: women who possess attributes that society says are far superior to their own. But it's both painful and empowering at the same time, because depression can be lifted by reassuring oneself how ridiculous such archaic notions of beauty are, and "Isn't it hilarious that these ideals are still being reinforced?" Flawless-looking women are actually somewhat laughable now, rather than being taken as seriously as they were in pre-ironic, pre-Roseanne America. When Britney slinks around that huge stage, draped with a snake that'll have more exposure in its tiny little reptilian life than an average all-girl punk rock garage band could ever dream of, a gal can still pat herself on the back, knowing that uncool Britney wanted to cover "I Love Rock 'n' Roll" because she "loves Pat Benatar."

Lack of any musical knowledge aside, Britney's doe-eyed "I didn't ask for all this" Southern charm doesn't allow girls to just write her off cattily, like the warbling, sleazy Christina Aguilera. Girls want to like Britney because she seems as if she deserves the fame and fortune, even though she might be just a prepackaged teenyboppin' mall tart who sings songs she didn't write. If she's got anything, it's more staying power than most other young female pop singers. To any rock fan with tits, that's impressive.