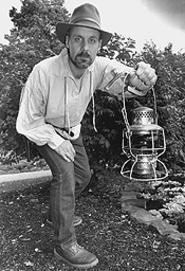 Though he considers himself a nice guy, being mean is Carl Casavecchia's cross to bear. If he ever ran into someone really mean, he'd retire to the land of puppies and birdsong, and let a pro take over. But until that fateful day, the sweet-tempered woodsman must crack the whip.

"Put your nose on the ground," he barks at a cowering teenager in a quivering, high-pitched drawl. "All the way on the ground! If not, I'm gonna make it go on the ground."

For four weekend nights each fall, Casavecchia is the bootheel behind the Cleveland Metroparks's Escape on the Underground Railroad, a two-hour taste of what the accompanying flier somewhat clumsily describes as "the heart-wrenching experience of slavery."

With sticks in hand, Slave Master Carl and his second in command, Steve Spisak, order the thirty audience members/slaves -- who will be inspected, sold, and routinely humiliated during the living history program -- to get down on their knees.

"Keep your eyes down! Don't be looking at me!" Casavecchia hisses. He has them lie on their bellies in the grass, and tells them they're worse than dirt.

"We know that if we don't get people in the right frame of mind, we've ruined the show," says Casavecchia, who admits he buckles and goes easy on people who look truly frightened. "We're usually emotionally drained by the end."

A naturalist at Garfield Park Reservation, Casavecchia introduced the living history program in 1997, after he was enslaved and ultimately emancipated on a similar journey with a group of sixth-graders in southwestern Ohio.

Held in the woods at nightfall ("when the apprehension level goes up," he says), the popular Metroparks event, designed for adults and chaperoned teens, enlists fifteen costumed volunteers to guide and interrupt the journey.

After the verbal flogging and dirt calisthenics, the slaves are auctioned off, separated, and marched into the woods, where Casavecchia threatens to whup them, string them from a tree, and have his men shoot them if they get out of line.

Left to their defenses, they soon meet up with Polly, an underground railroad "conductor" loosely modeled after Harriet Tubman and played by Vernice Jackson, a corporate manager at Parker Hannifin.

"I'm taking you on a trip," she announces, drawing out each line with the measured tenacity of someone who has practiced her lines so diligently, she lives in fear of tripping up. "A trip on the underground railroad. It leads you to free-dom."

By the light of a single lantern, the travelers encounter a bounty hunter disguised as an abolitionist and a pair of singsongy Shaker women who receive them with didactic speeches and offers of cough syrup made from skunk cabbage.

"You know, you don't have to go as far as Canada to find freedom," recite the Shakers, apparently oblivious to the time constraints on people running from hit men. "Why, you can find freedom right here with us in the Valley of God's pleasures. We detest slavery, feel it is the world's greatest evil and the work of the devil. We shall help you."

Not in this lifetime. The slaves grab the cough syrup and make a break for the border. Casavecchia and Spisak jump from the thicket, toy rifles raised. One of the men points his gun between the eyes of an eighth-grader, who's at first scared, then relieved to see it's a fake.

Casavecchia says he hasn't come across any parks volunteers or staff members who are shoo-ins for sadists. So he must press on as the oppressor.

"It's just Steve and I so far," he says. "We'd like to find somebody else, but then people come up and tell us, 'You guys are so good at that.' Gee, thanks."

From here, freedom is just a jog from the treeline to the picnic pavilion, where corn bread and cider are served. High fives all around. -- Putre

Cleveland Metroparks's Escape on the Underground Railroad concludes Thursday and Friday from 6:30-9:30 p.m. at an undisclosed location. (Participants will receive a map to the site.) Registration is required; call 216-341-3152.,