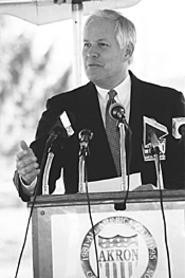 Don Plusquellic is a badass, old-school mayor. He bends arms, busts heads, and is not afraid to knock down the guy who stands in his way. This is a very good thing.

He's not the mayor of Seattle, after all, where they worry about such cute little things as an espresso tax. He's the boss of Akron. It's a working man's job.

Here in the Rust Belt, we've been screwed by the unholy trinity of industrial flight, traitorous executives, and the most visionless governance money can buy. Akron was screwed more than most. The loss of its tire industry was akin to the Big Three bailing on Detroit. So unless your goal is to become the American Beirut, there's no time to talk pretty and look smart. It takes a fierce man to beat long odds, to move the seemingly unmovable. This is Plusquellic's gift.

Visit Akron, and you'll see signs of rebirth everywhere. It's a shimmering beauty by no means, but it's muscling up with new jobs. Akron isn't worried about deficits; there's no talk of dumping firemen and cops. That's because it lives within its means and builds for tomorrow. In the last decade, downtown income-tax revenues have risen 300 percent, according to Council Vice President John Conti.

These are remarkable achievements, considering where the city came from -- triumphs that Cleveland can only window shop for. If the two cities were brothers, Cleveland would be the one who can barely keep a paycheck, the one that Dad alternately fears for and curses. Akron would be the good son with a house and a union card, who's got a chance of making foreman.

Give credit to Plusquellic. By sheer will and 17 years of pushing, he's turned Akron around. So you'd think the guy has earned the right to be challenged straight up. Unfortunately, that's not Bryan Williams's way.

During his four terms in the legislature, Williams rode the pine, leaving no footprints. A man of marginal intellect and talent is of little use in deciding the great issues of the day. His are treasures that begin and end with his willingness to glad-hand, smile pretty, and beg for money. Throw him in an alley with Plusquellic, and it's like Jessica Simpson calling out Lennox Lewis.

But Williams, who did not respond to interview requests, is smart enough to know that he can't win the mayor's office by going toe-to-toe. So he wants to take it the cheap way, with a referendum on term limits. This is one of those quaint ideas Republicans like to toss about. The theory is that the citizen-statesman will rise to do his duty, serve selflessly with virtue and valor, and then return to private life instead of becoming a career politician. It might even be a good theory -- if this were, say, 1783.

But the modern reality is that it's simply a racket. See Bryan Williams.

He's being term-limited out of his job in Columbus. If he really bought the idea, he wouldn't be running for mayor. He'd get a job selling carpet, where he couldn't hurt anything.

Yet this isn't about beliefs. It's about killing off competition. "Most of the people behind it have either been cast out of office or haven't won, when they tried to get in," says Conti. "From the Williams standpoint, he can't beat long-term incumbents at the polls, so he wants to make it so they can't run again."

Nor is it about improving government. University of Akron professor Rick Farmer studies these things for a living. A decade of legislative term limits has done nothing to reduce the ranks of career politicians in Ohio, he says. They simply run for another office or grub appointments from the governor.

What term limits do guarantee is that experienced people get thrown off the job, to be replaced by rookies. Farmer believes there's an upside to this: "There are a substantial number of people out there who believe in limited government." Term limits make it "less efficient, less effective . . . When you have inexperienced people who don't particularly know the process well, that creates a significant amount of chaos."

In other words, if you want to render government impotent, simply fill it with guys who can't find their ass, then pay 'em to squawk, shuffle paper, and do nothing. Witness the legislature, which is slightly more competent than the Palestinian Authority.

Yet Rust Belt cities can't afford subsidized ineptitude. An uphill fight is won only with smart punching, wise strategy, and the cunning use of slim assets. Even then, the odds remain long. Morons with gimmicks don't win these fights. They get their ass kicked, and you get stuck hauling their carcass off the street.

Republican John Franks spent 20 years on the Akron Council. The city budget is five inches thick, he says. The city code, 12 inches. You have to know about EPA requirements, zoning laws, state mandates. It's not a job for stiffs. "It takes you two to three years just to understand -- and this is a part-time job," says Franks. "Even Einstein would take time."

But he also knows the term-limit referendum has nothing to do with smart work. It's about weak men trying to overthrow the king. "This is being done to spite Plusquellic," Franks says. "Akron has been in a lot better shape than Cleveland and other cities in Ohio. It's in much better shape financially. Why screw it up for spiteful reasons?"

But it's hard to resist any measure that seems to exact revenge on politicians, even a fool's play like this. After all, we've been suckered before.

"We're always looking for a grapefruit-pill diet plan," says Plusquellic. "Drink all you want, eat all you want, and just take this pill at night. A lot of people fall for those kinds of promises, that you just take this instant pill. It's not going to solve the frustration that people have with every level of government."