The comedy franchise's Cleveland outlet stumbles out of the gate. 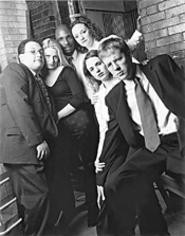 First, the great news: After three years of laborious struggle, Second City Cleveland has finally opened. The not-so-great news is that it's only half as funny as it ought to be.

No matter what, there is now a brand-new intimate and sophisticated theater filling a much-needed niche in Playhouse Square. The district's lovely old theatrical palaces were never suitable for any type of small entertainment. Now, in addition to the comic revues it was built for, the new space will be used for cabarets and a variety of other showcases.

It's a welcome environment for having fun. Sleek, contemporary, and urban, it has cozy nightclub ambiance that probably makes audiences more forgiving than they would be under more formal circumstances. For the truth is, there is a lot here to forgive, despite several fine moments during Second City's opening production, Rivercan't (dual subtitled The Traficanterbury Tales and A Humorless Celtic Dance Company Made Us Change the Title of Our Show).

In setting up the fifth branch of its franchise, the mother company made two fundamental miscalculations: being too hovering and too indulgent at the same time. The majority of the evening is composed of scripted scenes culled from other cities. This leads to a couple of problems: The evening isn't built around the specific talents of the company, and the Cleveland connection generally seems forced. (Even the title -- ostensibly about Congressman James Traficant -- was supported by only one fleeting bit.) On the other hand, the neophyte cast appears to have had too much free rein. It would have made more sense to have sent a few veteran performers to help the newcomers along.

Only three of the six-member company have personas muscular enough to consistently hold the stage. Cody Dove, with his shifty-eyed WASP nervousness, is the most memorable of the bunch. There's a fascinating ambiguity to him, as if he could just as easily morph into either Jeffrey Dahmer or John Denver. George Caleodis is the group's lovable Sad Sack. Sweet and foolish, he excels equally as a preposterously noble fireman or a deliciously unctuous diversity instructor. As the latter, he succinctly captures the touchy-feely earnestness of the politically correct. This is the kind of detail work so vital to the Second City style of comic performance. Jack Hourigan, in spite of her masculine name, is the dangerous golden girl of the group. Sexy and supple, she is a dazzling physical comedienne who can embody anything, from a ventriloquist's dummy to a high school slut.

The other performers -- Colleen Doyle, Quinn Patterson, and Dana Quercioli -- all have their eccentric niceties and effective pantomimes, yet they blur before our eyes. They lack sufficient presence and style to form a lasting impression.

Ron West's direction and guidance are decidedly tentative. Many of the comic visual bits are made obtuse by clumsy staging and bad timing. The finale is a case in point: Designed to be a visual odyssey through various parts of Greater Cleveland, it should have been the crowning moment to send the audience out on a giddy note. But the majority of the local references are unfocused, and the scene drags.

By contrast, the first scene -- actually a musical number -- is the only work that seems to have a sincere Cleveland bent. In it, the cast members extol the almost mystical benefits of a new stadium. "When you build a stadium," they sing with the exuberance of a Chamber of Commerce jingle, "it's suddenly safe at the Greyhound station!"

About half of the material catches fire. A scene of two couples playing a Pictionary-like game has great emotional truth behind it, accurately encapsulating the competition between men and women. And it's downright hilarious. There are a variety of wonderfully outrageous vignettes, including a human bagpipe, a Jules Feifferish secretaries' dance on rolling chairs, and best of all, in one of the evening's few genuinely spontaneous moments, a dropped baby that becomes a sensational running gag.

The latter is an example of true improv bursting through the canned material. The scheduled improvisation segment, however, is the show's nadir. On Saturday night, it was ragged, disorganized, and unconnected to the audience's requests. It seemed more like a classroom exercise than a professional show.

The performers desperately need to sharpen their improv skills. While they're at it, they ought to recruit a more inspired director and begin to create their own comic universe with material cut to their individual talents.

In the meantime, there's another issue that needs to be addressed, and that is why Playhouse Square is sabotaging its own renaissance. For some reason, all the bistros within walking distance were shut tighter than a proverbial drum after the Saturday-night show. A missed opportunity like this is how ghost towns are created.