Sly as a Fox

L.A. funnyman sneaks in material from back in the day. 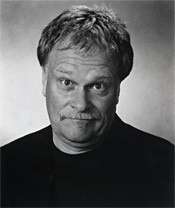 Comedian John Fox has been working the stand-up circuit so long, he can't even remember vintage jokes off his 12 albums. So a few weeks ago, he bought three of the old CDs in a truck-stop bin (for 99 cents each) and gave them a listen. "I was laughing my ass off. It was like somebody else telling the jokes," says Fox, who'll slip a couple of his old zingers into his routine in Cuyahoga Falls tonight. "I was like, 'This guy is fucking funny!'" A comedy-club fixture for three decades, Fox's big break came in the mid-'70s, when he met Laverne & Shirley star Penny Marshall at a Hollywood watering hole. Her connections with L.A.'s studio bosses led him to his first gig as an intern for some of TV's seasoned sitcom writers. "Basically, I was a coffee boy the first year. I ran from place to place, but I learned so much from watching the writers sit there in their little groups," remembers Fox. "Eventually, I moved up and became a staff writer." But he itched to be onstage, for reasons way less noble than you might think. "I'm lazy," Fox says. "I work an hour a day and drink on the job because the boss buys 'em. My only problem now is, I keep getting older, and the waitresses don't." Fox performs at 8:30 tonight and 8 and 10:30 p.m. tomorrow and Saturday at the Funny Stop, 1757 State Road in Cuyahoga Falls. Tickets are $7 to $12. Call 330-923-4700 or visit www.funnystop.com.
Thu., Nov. 8, 8:30 p.m.; Fri., Nov. 9, 8 & 10:30 p.m., 2007