DEJ Productions tries to give "direct-to-video" a good name. 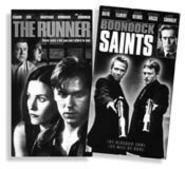 Just last week, the makers of a film called Pendulum gathered in a brand-new Dallas movie theater to screen their picture. The event was a fund-raiser for both the Susan J. Komen Breast Cancer Foundation's Race for the Cure and the trust fund for the children of Pendulum co-star Alissa Alban, who died last year of brain cancer--six months after the film wrapped. Pendulum, which stars former model and Mrs. Rod Stewart Rachel Hunter as a Dallas police officer investigating a murder, is a generally mediocre picture--soft-core porn, without the guts to follow through. Likely, after this screening, it will never again appear in a movie theater--but not because it doesn't deserve to be seen on the big screen (neither do the films of David Spade, which stops no one), but because its distributor doesn't deal with multiplexes and box-office receipts and popcorn palaces. This week, Pendulum will premiere on a shelf in a video store near you courtesy of its distributor: DEJ Productions, an independent subsidiary of--what else?--Blockbuster Video.

Pendulum's producers surely envisioned a wide theatrical release for their picture, but the movie business has a way of turning even the biggest dreamer into a pragmatist. Without the 3-year-old DEJ--it was formed in January 1999 by Blockbuster Executive Vice President Dean Wilson, corporate counsel Edward Stead and CEO John Antioco, hence its name--director James B. Deck's movie might have been seen only by his friends and family. But DEJ has given it new life, as it's done for a few hundred other films passed over by major distributors such as Miramax and Sony Classics and Fox Searchlight. Yes, it may have been released direct-to-video, which accounts for a tiny percentage of Blockbuster's receipts--still in the single digits, actually--but at least it will be seen. By someone. By anyone.

If nothing else, DEJ gives hope to the hopeless: wannabe filmmakers, would-be producers and has-been actors. On its roster are movies starring the likes of William Hurt (The Contaminated Man), Matthew Modine (If...Dog...Rabbit, his 1999 directorial debut), Armand Assante (Last Run, due out later this year) and any Baldwin brother not named Alec.

Some producers view DEJ as their savior: Without it, says Lloyd Segan, his 1999 film Boondock Saints would have sat on the shelf indefinitely. An absurdist, violent film starring Willem Dafoe as a fey FBI agent who cases a crime scene with classical music in his headphones, Boondock Saints wasn't a favorite among distributors, who fretted that its themes of vigilantism echoed too closely the sounds of gunshots coming from Columbine High School in April 1999. Segan was turned onto Wilson by another filmmaker, Troy Duffy, whose film The Curve had been picked up by DEJ and even received a theatrical run in Baltimore, Duffy's hometown. Wilson bought Boondock Saints the very day he saw it and gave it a limited theatrical run in Los Angeles, San Francisco, Boston and Dallas.

"Dean is a filmmaker's dream, and when the film came out on video, it was at the front of the store with its own display, and it felt like a major title," Segan says. "You would have thought it was Shrek the way they marketed it. It was a very, very heartening thing for us, and as a result of good sales internationally and in video, the filmmaker has written a sequel, and we'll talk to Dean and his colleagues about putting it together. Now, other people have come out of the woodwork and said, 'This looks like a real business opportunity,' and we're like, 'Where were you when we needed you?' If Dean and his partner can carve out a business on this level, they'll have filmmakers eating out of their hands."

Since its inception, DEJ has quietly become one of the largest purchasers and distributors of new, or relatively new, films: Where Miramax might release 25 or 30 titles a year, some acquisitions but most either financed or co-financed by the Disney-owned company, DEJ this year will purchase nearly 120 films and release (OK, put on shelves) some 80 titles. During its first year, the company bought 72 movies; its inventory now numbers more than 300.

Initially, Stead says, DEJ was buying films directly from studios looking to dump product they couldn't squeeze into the multiplexes; its first acquisition was a 1998 film called Still Breathing, starring Brendan Fraser and originally distributed through October Pictures. The film debuted in May 1998 and ran for a mere three weeks, grossing a paltry $200,000. DEJ stepped in, acquired the home-video rights, jazzed up the packaging and recouped its investment and then some; Wilson says it remains among DEJ's most profitable titles.

But DEJ wasn't satisfied buying someone else's refuse and began attending film festivals, including Sundance, and other film marts where producers were pitching product. It made more sense: DEJ could get overlooked movies at a better price. The problem was, the company had to convince its customers it wasn't just offering the best of the leftovers.

"I like to think of it more in terms of they [the better-known distributors] missed it and I found it," says Wilson, who moved last year from Dallas, where Blockbuster is based, to Los Angeles, where he heads up DEJ's operations. "It's a diamond mine, and I found the gem. For one thing, they can't release everything out there. So what we've been able to do is, through different partners and through different sources, find product that, well, I don't know if it didn't meet their standards so much as it was just overlooked with the amount that's out there."

Direct-to-video--it's the ultimate pejorative in the movie bidness, a sure sign that box you're eyeballing on the Blockbuster shelf smells of yesterday's leftovers. And, yeah, DEJ's roster is littered with titles not even the deaf and blind could stomach--titles such as Operation Delta Force 5 (who knew?), The Princess and the Barrio Boy, Strip Poker: Red Shoes Diary 18, Gunblast Vodka (a comedy about snuff films, dear God, starring model Angie Everhart, dear God) and on and on. Segan reminds that those kinds of films are done extremely inexpensively--most for around $100,000 to $200,000--and were picked up on the cheap to flesh out the inventory. (And, fact is, a lot of that low-budget, lowbrow product does well in Europe--then again, so did fascism.)

But for every 30 stinkers that linger on the shelves, wonting for attention alongside better-known theatrical releases, there is indeed the rare nugget of which Wilson so fondly speaks--something like Boondock Saints or the gambling thriller The Runner, a 1999 movie starring Friends' Courteney Cox, John Goodman and Black Hawk Down's Ron Eldard. DEJ has also distributed smaller indie films that did receive limited theatrical runs, among them the Barenaked Ladies' documentary Barenaked in America, the Iranian film A Time for Drunken Horses and other films that recently made the rounds as part of the critically adored Shooting Gallery Film Series. (Magnolia Pictures President Eamonn Bowles, who ran the Shooting Gallery series, says those were limited pickups; Blockbuster and DEJ had exclusive rights to those movies for only three months last year.)

And because DEJ is connected to Blockbuster and its parent company, the publicly owned Viacom--which has beneath its umbrella such mighty media outlets as MTV, Showtime, Starz, Nickelodeon and Paramount Pictures--DEJ also has access to made-for-TV movies and miniseries, among them Anne Rice's The Feast of All Saints and Ruby's Bucket of Blood, both of which aired initially on Showtime last year. It actually works both ways: DEJ will pick up films for video release that will later air on Showtime or Starz, and Wilson says the company has begun preliminary talks with MTV and Nickelodeon about sharing product.

But, as Wilson reminds, "Sometimes, when you're so close, you stay the furthest apart. One thing to remember is DEJ is a wholly owned subsidiary of Blockbuster and a separate entity, and we operate that way. I think that it opens doors for us, but at the same time it's not a guarantee of distribution the way it is within the Blockbuster stores. So, who knows? You may see something come down the road, but at this point, I don't see it in the immediate future."

Since DEJ operates as an independent company within Blockbuster, it allows for all kinds of freedom: DEJ's handful of employees, from its top execs to its receptionist, watch all films submitted for consideration and put them to a vote; it also puts its product not just in Blockbuster's 8,000 outlets worldwide, but also in competing stores, such as Hollywood Video, which likewise is looking for product outside normal studio channels.

DEJ also is beginning to flex a mighty muscle: This week, it expects to sign a deal with a major studio to release a $50 million production, which the studio wants to dump before it spends one more penny on promotion and distribution. Wilson and Stead won't discuss it until contracts are signed sometime this week--but if nothing else, the impending deal hints that DEJ isn't content to take the best of the rest any longer.

"When we started, there was that initial fear that we were that big corporation filmmakers didn't want to come near," Wilson says. "In fact, the first time we went to Sundance, people didn't know why we were there or what we were up to. A lot of filmmakers initially have this belief that they're not a success unless they end up in a theater...These people have put a lot of heart and soul into these films. In a lot of cases, it's a labor of love. They all want to be Spielberg and all want to make tons of money eventually, but I think that in a lot of these early projects, they put everything into it, and I would love to see theatrical release. But I think they're now coming to terms with the fact theatrical release isn't available for everything. We offer up exposure to people, which, when it comes down to it, is really what they want."