Frat-boy image aside, the Bloodhound Gang's ahead of the curve. 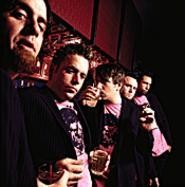 Despite published reports to the contrary, Bloodhound Gang frontman Jimmy Pop is a gifted writer, performer, and producer. No, really. Inspired by a sincere love of Europop, Pop has a knack for writing catchy songs that strike a fine balance between being juvenile and poignant. In the indelible new single "Foxtrot Uniform Charlie Kilo," Pop uses his talents to create FCC-approved euphemisms for doing it, such as "batter-dip the cranny axe in the gut locker," "vulcanize the whoopee stick in the ham wallet," and "cattle-prod the oyster ditch with the lap rocket." Clever or not, it's the kind of wordplay that goes over -- or, more likely, under -- the heads of Serious Critics, whose first impulse is to beat the band up.

"Half the people get it, and half don't," says Pop, on the phone from London, in the middle of a European tour. "The people that think they're better than me don't get it. The joke's not funny if everybody gets it."

Through the Bloodhound Gang's body of smartass songs and videos, the group's brutal critical reception is consistently ironic. Review after review describes the band members as "frat boys," lumping them in with the same guys Pop says beat the Gang up in high school. (See 1996's "I Wish I Was Queer So I Could Get Chicks," which recounts, "My friend Jerry Vandergrift kissed me in Home Ec class/Later on, some jarheads in the locker room kicked my ass.")

"I'm one of the few people that's been accused of being homophobic and gay-bashed at the same time," Pop says. "I've definitely made out with more guys than most gay guys have -- kissing guys onstage, daring them to make out with me, just to fuck with them."

Okay, so it's not exactly performance art. But while it's easy to write off the Bloodhound Gang's stage show and lyrics, it's harder to deny that Pop has a history of being ahead of the curve. His last hit, 2000's "The Bad Touch" -- an Erasure-on-testosterone dance anthem loaded with sophomoric sexual references -- prefigured the critically lauded retro '80s movement. Pop says he's always had a thing for the different styles from the big-hair decade, and time only makes him appreciate them more.

"I liked things like Depeche Mode and Slayer, but once I realized that the '90s weren't going so well, I realized the '80s were better," Pop says. "Things weren't cookie-cutter then, which led to some bad decisions and mistakes, but that was OK. Something told me that the kid next to me would regret that Whitesnake mullet. And I knew I might regret the Depeche Mode haircut, but not in the same way. It was like some big corporation took over the '90s, and then it merged into the 2000s. Bands like the Killers or Franz Ferdinand, it's more good '80s music."

Before the Bloodhound Gang went on its new-new-wave kick, the band was a quintet of wisenheimers from suburban Philadelphia, riding the second wave of rap-rock. Sporting piercings, knit caps, and dreads, the Gang scored a deal with Sony and released 1995's fun, funky Use Your Fingers, which earned the band little success and less acclaim. Despite delivering one of white rap's high-water marks, the Gang was unceremoniously dropped. Pop convened a new lineup and independently released 1996's One Fierce Beer Coaster. The irreverent disc scored a surprise hit with "Fire Water Burn," which Pop began by identifying himself as "a dumb white guy," later mumbling in a dry monotone the disco refrain "The roof is on fire." Swept up in the crossover craze, Geffen offered the band a sweetheart deal, and the Gang took it.

Hooray for Boobies, the group's equally lowbrow 2000 album, yielded the smash "The Bad Touch." After 18 months of touring, the Gang members found themselves in what Pop calls a "pretty comfortable position" and took a long break. Pop learned that he lived near skater Bam Margera and the Jackass crew, and he's been keeping busy with some behind-the-scenes work on the Viva la Bam show. Through Margera, Pop discovered Finnish goth-glam phenom H.I.M. Surprised that the band wasn't widely available in America, he bought the American rights to its first four albums and released a compilation through the Jimmy Franks (that's Pop's real name) Recording Company.

Not a bad track record for a self-described "great white dope." Pop has a long list of prescient moves. Not impressed with P. Diddy sampling Frankie Goes to Hollywood's "Relax" at the recent MTV Music Awards? The Bloodhound Gang did it better on "Mope" five years ago (nearly two years before Fred Durst copped the idea). And while inspiring the Kottonmouth Kings and Alien Ant Farm might not be something Pop wants on his résumé, he definitely deserves some retroactive props. In 1996, the Gang's "Lift Your Head Up High (and Blow Your Brains Out)" used a backward vocal hook to universal critical silence. Six years later, Missy Elliot and Timbaland were hailed as brilliant for doing the same thing in "Work It."

"We get absolutely zero credit," Pop says. "But that's OK. That's not why I do it. So when I turn on the TV and see Missy Elliott and Timbaland onstage at the MTV awards, they can have it. You don't get good reviews being in the Bloodhound Gang. We could have Juilliard School of Music students playing with us, but because I'm telling poop jokes over it, it's [perceived as being] just poop jokes. But I feel like we're in a better position than Fred Durst, at least. Because when we're backstage at festivals, people still want to talk to us."