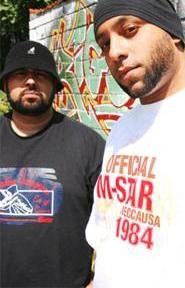 Whatever happened to hip-hop production? Led by the Bomb Squad, Boogie Down Productions, and Prince Paul in the early '90s, it used to be a seven-layer cake of samples, sounds, and textures on which the MC was the frosting. Dälek recalls those halcyon days with a tense, tightly wound sound of sputtering, shrieking beats, simmering in a cauldron of dense, dank grime. The anxious, shadowy tone complements lyrics that are equally dark and impassioned, and set low in the mix like just another instrument or sample.

"Me and Oktopus work on the music together, and I write the lyrics," says Dälek from his home in Newark. "I just want the lyrics to be part of the song, rather than how most hip-hop record lyrics are -- so over-the-top loud in the mix. I never want to do that: a) for aesthetics, and b) because I don't have an ego like that. I don't need to be the loudest thing in the mix."

The result is a disorienting whine and whirl, which you must negotiate before you can even begin to digest what Dälek has to say lyrically.

A big inspiration for Dälek was the music of My Bloody Valentine, which makes sense in light of their preference for thick, visceral washes of guitar, distortion, and noise. After hearing MBV's Loveless, he says, "It completely changed my perception of music in general and what you can do in a studio and what is considered a right or a good mix."

Though pretty steadfast in his sonic beliefs, Dälek is not intractable. On his third and latest album, Absence, the lyrics rise in the mix, and his sometimes cryptic statements become more of a blunt object on tracks such as "Asylum (Permanent Underclass)," "Culture for Dollars," and "Opiate the Masses."

"Absence was our first attempt to find some balance, like actually bringing the lyrics out some more and making them a little more accessible, but still keeping that wall-of-sound atmosphere," Dälek says. "As far as the lyrics, it's the most straight-forward album I've ever written. There's definitely layers, but the top layer of meaning is the one I wanted people to get off the bat. The sounds of the songs simply called for a rawer, honest, straightforward flow. The prior albums were a little more, well, 'poetic,' for lack of a better word."

Dälek's cousins were DJs, and hip-hop has been a part of his life and culture for as long as he can remember. He speaks fondly of the old days of crate-digging, when narrow-minded tastes made for a critically flawed DJ.

"The whole thing was to find records with parts that no one else had played. So you were digging into all kinds of things, and you weren't stopping, going 'Oh, wait a minute, I can't play this jazz album because this isn't hip-hop,'" he says. "I find it ironic that a music form that relies so much on use of sounds from every genre has now gotten to the point where it excludes people because they don't fit this parameter. It was never about parameters."

He laughs and wonders aloud whether he's a dying breed. Some 15-year-olds he met at a recent show in Minneapolis didn't even know who Public Enemy was. There was a spirit in rap, back in the day, that's absent now that it's become such a big business.

"Hip-hop back then was almost uncontrolled. Nobody gave a shit if you were black nationalist in your lyric content. Or having sociopolitical commentary, Miami bass music, or gangsta. There was room for everything. To me, the biggest sign it's been bought up by a corporation is that they've found the base common denominator and broken it down to whatever sells the best," he says. "They found a formula, and if you don't fit inside those parameters, then you fall outside the box. There is no room in the corporate hip-hop world for all the different kinds of styles."

But while he's nostalgic for those old days and sounds -- "I think the current stuff misses the groove. I miss hearing a dirty drum beat. Everything is so pristine; this isn't classical music" -- Dälek nonetheless has little patience for underground-vs.-mainstream arguments.

Indeed, he suggests, such posturing is usually just self-serving, and it pales next to the larger issues facing the black community.

"The state and future of hip-hop isn't really my concern. My concern is the future and state of my people," he says. "The fact that being a hip-hop superstar or a basketball player, an actor or entertainer, or an athlete in general is the best option for my people in the inner city, that is the main concern . . . I don't give a fuck what happens to hip-hop, when that's the reality."

Given the cold, hollow clang of some of his beats, it's not surprising that Dälek is a big fan of seminal Krautrock group Faust. Apparently the band heard Dälek's shout-out on "Classical Homicide" ("How many MCs know who Faust is?") and invited him to Germany to record 2004's Derbe Respect Alder with them. The legendary performers also offered a few words of encouragement.

"[Keyboardist Hans] Joachim [Irmler] grabbed me and said, 'You guys are amazing. You're just like us.' I'm like, 'Wow, thanks.' And he says, 'Yes, you'll never make any money,'" Dälek says. "I was like, 'Can you please just stop the compliments now?' It's the whole artist thing -- people will love this when I'm gone, which is cool. They'll be talking about the genius of Dälek. It'd be cool to be recognized someday. My kids will be 'Okay, maybe Dad wasn't such a sucker.'"