Short Cut to Nirvana espouses enlightenment, but it's sketchy on how to get there. 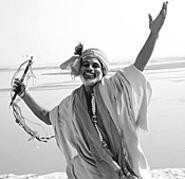 For younger viewers, it may be necessary to explain that the new movie Short Cut to Nirvana does not offer pointers on how to obtain a cheap copy of the new CD boxed set by Kurt Cobain's old grunge-rock band. That, you'll have to figure out yourself. Doing so may prove more enlightening than watching the actual film in question, which offers the experience of tagging along on a religious pilgrimage in India, while delivering very little of the accompanying enlightenment.

In all fairness, an 85-minute documentary would be hard-pressed to deliver enlightenment under the best of circumstances, but given that, it needs to offer up something else: narrative thrust, perhaps, or characters whose fate is in question. Nope and nope, in this instance. If you like looking at religious Hindus, you'll love Short Cut to Nirvana. If you want much more than that . . . dunno what to tell you.

The film, by Maurizio Benazzo and Nick Day, looks at the Kumbh Mela, which is considered the world's largest gathering of people -- with 30 million to 70 million attendees -- and has occurred every 12 years since around 500 B.C. Mark Twain wrote of it in 1895. Legend has it that the whole thing began when gods and demons fought over a pot of nectar that could grant immortality -- a chase ensued that lasted 12 days, with four drops spilling from the pot. The four drops became four cities; each of the 12 days became a year.

From a foreigner's point of view, the event looks like a massive carnival in which every vendor's tent is religiously oriented. Our sort-of guide is Swami Krishnanand, but he seems most interested in blond American nurse Dyan Summers, who offers us platitudes about how much she's changed, but can't really articulate exactly how she's changed. When the swami tells us that being with a woman helps your spiritual development, it's presented in such a way that it could be a pickup line, rather than anything profound. Maybe he's jealous; earlier, Dyan got to inject another guru in the rear end, and he appeared to enjoy the experience greatly.

There are certainly some freak-show attributes to the pilgrimage that ought to appeal to curious eyes: Japanese spiritualist Yog Mata specializes in being buried for days on end, thanks to the mind-body separation technique known as samadhi ('90s alt-rock fans may remember that word from the popular CD by the band Live). Ramananad Puri advocates sitting in the same position for hours on end, which "is better than what you get in the whole day." One unnamed individual wraps his penis around a bamboo stick, then twists the stick. Avadhoor Baba sits on red-hot nails. Kali Baada boasts a huge lip ring and nasal piercings that put every American goth/metalhead to shame. And if you like watching naked dudes, hang in there for the climax and a mass-bathing scene that's schlong heaven.

The Dalai Lama even shows up to espouse some rather noncontroversial spiritual ideas, such as "Conversion, I think, is outdated." Much of the spirituality expressed herein is similar, all about the unity of all people, the exaltation of love, the condemnation of excessive riches, and the ways in which all religions are means to the same end -- or, phrased a tad more clumsily, "There's no 'this way' that's completely opposite from 'that way.'" Conservative Christians and Muslims may have a problem with such pagan statements, but most others won't.

One might consider, however, that even a hardcore Christian or Muslim festival might look similarly loving if examined only on a superficial level. The filmmakers don't ask specific questions about the religious requirements of the various gurus that could have shed more light. The most interesting opportunity to do so would have been at the point in the movie where it's put forward that couples are ideal because they produce children. Does that mean homosexuals, who can't reproduce without outside assistance, aren't so ideal? You won't find out in this instance. You get the sense that tolerance is encouraged, but who knows where that begins and ends? Different people define the word differently. One thing that is striking, however, is that most of the gurus seem to have a good sense of humor and like to laugh, which stands in striking contrast to the U.S. perception of religious devotees as humorless squares who like to condemn everything in the culture.