Frank Mauceri likes to say that his office is wherever his laptop happens to be. Today, it's New York City for the owner of Smog Veil Records. The Greenwich Village brownstone where he and his wife Lisa occasionally live might not have all the trappings of a record label office but it's not your typical flat either. A few Shepard Fairey "Obey" prints hang in the living room. In the master bedroom, prints by Devo singer Mark Mothersbaugh feature a cute little girl whose face looks more like a ghoul than an Alice in Wonderland stand-in.

"Come Alive! Join the underground generation," reads an Allen Ginsberg poster that shows a bearded Ginsberg with his arms extended high into the air, a red, white and blue hat balanced precariously atop his head. That sentiment could pass as Smog Veil's mission statement. The label specializes in reissuing old Cleveland punk bands, and Mauceri has also signed a number of new Cleveland punk acts over the years. When the label first launched in 1991, it released a 7-inch by now-legendary local hardcore heroes the Spudmonsters. More recently, it's put out albums by the garage blues band Obnox and art punk noisemakers This Moment in Black History, two of the city's best punk/garage/indie rock acts. 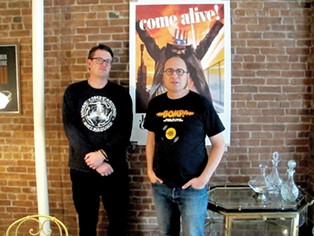 Though Mauceri, who grew up on Cleveland east side, rarely comes to Cleveland — he visits his parents in Lake County a couple times a year — Smog Veil has done much to nurture the local scene. That continues with Smog Veil's latest and most ambitious project yet: Mauceri and company have launched a special reissue campaign dubbed Platters du Cuyahoga.

The series commences this month with the release of Albert Ayler's Ghosts Live at the Yellow Ghetto, a studio effort from the art-punk band X_X. Two more albums in the first series — Robert Bensick's French Pictures in London and the Mr. Stress Blues Band's Live At the Brick Cottage 1972-73 — will come out in early 2016. Each release will arrive on vinyl and be accompanied by extensive liner notes put together by Andrew Russ and Nick Blakey, a sharp research team Mauceri has hired specifically for the project.

"There's a big demand for archival releases from Cleveland, and there's a lot of great Cleveland-produced music that either never got released or has been out of print forever," says Mauceri, who, with his round glasses, mutton chops and receding hairline, looks a bit like an older, hipper Harry Potter.

"There's this great treasure trove of recordings out there that I can draw upon," he continues. "For me, each of these records has a story behind it. It's more than putting out a record with 10 songs and a fancy cover. It's important to tell the story. There's a great history behind each of the records, and we want to bring the record out of the vacuum that exists and into a reality. All the records were not only underappreciated in their time, but they're relevant today and serve as a commentary about where Cleveland is now and where it's heading."

Andrew Russ, one half of the research duo, holds down a day gig as a research engineer/scientist at the Ohio Research Institute for Transportation and the Environment at Ohio University. He regularly sifts through back issues of The Plain Dealer to track down old reviews and stories: He's even tracked down the original classified ad that brought Rocket from the Tombs together. He and the tall, stocky Blakey, a guy who grew up in San Francisco, where he ended up hanging out in record stores and receiving what he dubs "a real education," have helped guide the project.

"I would rather read about bands like the Rolling Stones, the Beatles, the Kinks and the Who than throw a football when I was a kid, which confounded my father," says Blakey, who's taken a train into Manhattan to join Mauceri today as he discusses the series' impending launch. They're decked out in sneakers, blue jeans and T-shirts and look like a pair of overgrown teenagers as they sit on a plush blue sofa and dish on the extensive time they've devoted to Platters du Cuyahoga and the motivation for unearthing long-lost gems.

It All Starts with the Eels

Historically, Cleveland's role in punk rock's development might rank with that of major epicenters such as New York and London. In Clinton Heylin's 1993 book From the Velvets to the Voidoids: A Pre-Punk History for a Post-Punk World, Cleveland figures strongly. "Cleveland was the only U.S. city to have a contemporary wave of pre-punk exponents," Heylin writes. In the book, he interviews various members of Cleveland's formative punk bands and tells the story of how the electric eels, Mirrors, Rocket from the Tombs, Pere Ubu and the Dead Boys went against the grain and emerged from a steel town best-known as a classic rock hotbed.

When electric eels formed in 1972, guitarist John Morton — who currently leads X_X — would try to antagonize people by walking around town with bleached-blonde hair, wearing eye shadow and earrings. A frustrated art student who would drag lawn mowers and sheets of metal onstage in order to break from convention, Morton loved to push the boundaries of performance art. The band's single "Agitated"/"Cyclotron" wasn't issued until 1978 when the British label Rough Trade put it out at the recommendation of rock scribe Jon Savage. With its snotty vocals and snarling guitars, the single represents punk rock in its most primal form.

"You could say in hindsight that they were the first punk band, but I don't know," Scat Records owner Robert Griffin told us in a 2002 interview. "Does it make a difference if the monkeys know they're typing Shakespeare? It's almost a metaphysical question."

Morton, who now lives in upstate New York and works as an artist, often cites Charlotte Pressler, wife of the late Rocket from the Tombs singer-guitarist Peter Laughner, who once said that Cleveland was promised the end of the world but didn't get it. That, along with a healthy dose of late-night TV host Ghoulardi, a guy whose motto was "stay sick," helped fuel the discontent you hear in much of the punk music that emerged from Cleveland in the '70s. That motto inspired acts such as the Cramps, who issued an album called Stay Sick in 1990.

"We didn't know what we were doing," says Morton. "I know that for myself and the electric eels, I wanted to make music for myself. I had to feel good about it. I have always followed that. I always like provocation. I'm like a trickster. Let's get it going. Free jazz [is] angry, confrontational music. Albert Ayler couldn't have picked something to make his career worse. What is something that people will hate and disdain? It's very much the same with punk music. Let's do something aggressive and angry that's not easy to listen to. That's what I chose."

Anger and aggression can certainly be found in the music of Rocket from the Tombs, a band that would eventually spawn Pere Ubu and the Dead Boys. Rocket from the Tombs' singer David Thomas and Cinderella Backstreet singer-guitarist Peter Laughner would leave Rocket and join guitarist Tom Herman, bass guitarist Tim Wright, drummer Scott Krauss and synthesist Allen Ravenstine to form Pere Ubu in 1975.

One of the band's early "hits" was a rendition of Rocket from the Tombs' "Final Solution," a nihilistic song about not fitting in and wanting an end rather than a cure. Laughner would eventually leave the band and die from pancreatitis at age 24. "Peter's death was the end of an era for me," writes rock critic Lester Bangs. "An era of the most intense worship of nihilism and deathtripping in all marketable forms."

Back in 2002, Smog Veil Records released The Day the Earth Met the Rocket from the Tombs, a compilation of the band's best tunes, and gave the band a second life. The group has been touring and recording ever since.

"Those who were involved in the time, like me, are interested because it is part of our lives and we were dedicated to music and rock music, especially as a language, as an art and as a means of finding adulthood/meaning/substance," Tombs singer David Thomas once explained in an email exchange we had with him. "The people inside of something have different motivations and perspectives to the people outside, especially in a secretive craft like music. You are outside. I can't answer for why you or anyone else should think it matters. It's not my problem."

Russ has a more straightforward explanation for why underground music blossomed in Cleveland in the '70s.

"Ghoulardi introduced mayhem to local TV, and it rubbed off on an impressionable set of Cleveland youth," he says. "Michael Weldon in Mirrors started a magazine dedicated to those B-movies. That's definitely a factor. A lot of bands would come through Cleveland and by the mid-'70s, it became the place to start your tour if you're trying to break big in America. It certainly worked for David Bowie."

Mauceri was born and raised in Euclid. He discovered college radio when he was in his teens. "I realized there was a lot of other stuff out there," he says, recalling that he would shop at places such as Record Rendezvous, Record Revolution, the Drome, Chris' Warped Records. "I was a record collector when I was a kid. I never played in a band. I don't know how to play any instruments."

He worked at the college radio station at Ohio State University where he held down the Friday afternoon shift. "The business end of music always interested me," he says, adding that he studied entertainment law (in addition to other forms of law) at Cleveland State University's law school. "I didn't follow any particular course of study other than what I needed to pass the bar exam, but music still interested me."

He started the label just as he graduated from law school. Because he was friends with the Spudmonsters' Chris Andrews and saw the band a hundred times or more, he knew the band would be easy to work with. The first two pressings of the single sold out quickly.

"The business was a lot different then than it is now," says Mauceri. "You could run an ad in certain punk magazines and sell a large portion of the pressings through mail order. Get Hip in Pittsburgh could sell records. It was easier to do it at that time even though there was no Internet."