The nicotine-addled will rise up to save Cleveland. 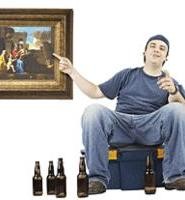 Violin and accordion sing a sad, sad song, the kind that makes you think of a Black Forest widow whose husband has died in a tragic whittling accident. But it's hard to tell. The instruments don't speak English.

The music enfolds people representing some 40 arts organizations -- musicians, actors, the guys who make those public sculptures seemingly inspired by rabid meth benders. They have been summoned to the Beck Center to rally around Issue 18, the coming levy that would raise an estimated $20-$25 million for the arts over the next decade. Behind the stage a banner reads: "It's NOT a property tax."

To paraphrase: "We got other morons covering this."

That's where you come in. You are not here for music or speeches. You're a smoker. And you have come to die slowly, painfully, with agony as your suitor, so that these people may thrive.

That's because the money will be raised through a new 30-cent-per-pack tax on cigs. You can tell by the absence of black duffel bags under eyes, the lack of beer at the buffet -- though the noon hour nears -- that you're the only one here who will be paying it. You swell in your seat with pride. For they have chosen you -- the strong, the resilient, the nicotine-addled -- to carry a burden they cannot.

In the lesser territories of your mind, you realize it's a bit unfair. Last year, the state enacted a new 70-cent cig tax. Now the arts guys want a piece of you too -- though they tend to be well-to-do, and smokers tend to subsist off noodles the week before payday. Your inner economist reports that this is nothing short of a redistribution of wealth -- with the arrows pointing in the wrong direction.

Moreover, these people will never acknowledge your gallantry. Actually, "pathetic" is the word they'll use. They see you not as one who rises when others don't, but as pitiable, lacking in self-control, a pox on the health system, and quite stinky. They have chosen you because no one else will pay, and you are a minority without allies, the weak deer in the herd.

You silently grant them their follies. While their words may be true, the truth often blows. Besides, there is a way truer truth at play here: You are a smoker. You are among The Chosen People. And only you can save Cleveland.

Cuyahoga County is home to some 105 arts and culture organizations. Some, like the Cleveland Orchestra, are so famous that guys from Austria who know the proper wine to serve with sea bass will pay to see 'em. Yet most, like the Beck Center here in Lakewood, teach little girls how to scorch the cello and dance like angels.

If you're buying the numbers, they employ more than the steel plant -- 3,000 full-timers -- and have an aggregate audience larger than our pro sports teams combined. But they suffer, dear smoker.

The arts used to be covered by East Side old money and homegrown corporations. Yet the old money has fossilized, and the companies eloped into the arms of Third World labor in Guatemala and Tennessee. The government can't cover, for it's busy burning your loot through dereliction and theft. Which is why most people would rather have their arm sawed off by a drunk Civil War surgeon than pay another tax.

That's why you, the smoker, must rise.

Now you're probably asking at this point, "Why can't them yuppies pay for their own damn cellos? Now quit bothering me. I'm trying to watch Crossing Jordan."

A master parry, good fellow. Well played. For as any smoker knows, true art is found in a few pints of Labatt, Troy Smith on the plasma, and a middle-aged barmaid with a smile that could melt Nazis serving you potato wedges. And you're not asking those yuppies to pick up your artistic bar tab, are you?

But this isn't really about art. It's about money, jobs, Cleveland. Witness all the prosperous cities -- Boston, Seattle, Minneapolis, Austin. Doesn't matter if they're located in an outdoor meat locker or the Seventh Level of Hades, more commonly known as Texas. The keynote theme is robust arts and culture scenes.

That's because the new entrepreneurs see no art in happy-hour Buffalo wings. They're into plays, paintings, some Bavarian guy's concerto in E minor. So they build their companies where that stuff's at. Which is why you don't see guys with ambitious facial hair and distressed Diesels galloping toward Dayton.

More important is the kids. Most of the money will teach them to sing, dance, paint, sculpt, and bust dangerous moves on the oboe. The public schools have largely deserted these things, hammering our young on math and science, hoping they'll someday grow up to be Japanese. But the arts are proven to dramatically increase kids' creative and critical-analysis skills.

If you want them to spring for the nursing home and Winstons when you get old, you pay. If you want 'em living on your hide-a-bed, you don't.

Yeah, it would be nice if the yuppies covered. But they are not strong, like you. They cannot wolf three packs of Camels till 2 a.m., then be back laying wire five hours later. They cannot stand outside in the benumbed hours of winter, hacking like an escapee from the tuberculosis ward, so that Little Suzie can light up the viola. It's no coincidence that during World War II, when cigs were a part of soldiers' rations, we kicked ass all over Europe. Now that they're not, we can't even punch out a few Iraqis.

It is for these reasons that you must rise, dauntless smoker. Through years of addictive sacrifice, you have proven your muscle, your fortitude, relentlessly banging forward at risk to health and hearth. You are tougher than a $2 steak, more powerful than 17 Swedish loggers named Magnus. Now Cleveland calls on you, because no one else will answer the bell.