He's an evangelical Baptist from Arkansas. And he's coming for you, downtown Cleveland. 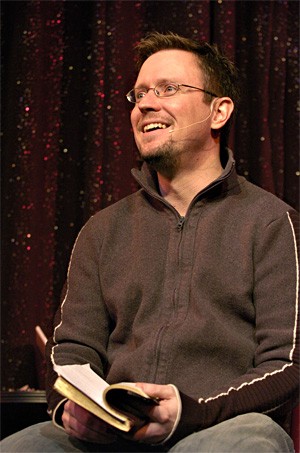 East Fourth Street is made for mischief, one of downtown's brightest bursts of life. It's lined with haute eateries, anchored by a rock club and bowling alley, and fueled by oversize margaritas and frothy pints of Guinness.

But that was Saturday night. It's Sunday now, 10:30 in the morning, and a different mood has taken over East Fourth. The brick-paved alley is desolate, cigarette butts the only remnants of the previous night's endeavors. Down in the comedy club, fresh vacuum tracks cover the carpet. It smells of Glade and 409.

Onstage, a smallish, short-haired man named Alex Ennes stands before a crowd much sparser and much soberer than the previous night's. Loose-fitting jeans and faded sweatshirts replace the Sevens and button-downs; steaming coffee mugs fill in for martini glasses. As Ennes moves through his routine, a few people close their eyes and listen to his casual story about second chances. "So think of repentance like mulligans in golf," says Ennes. He's more Ned Flanders than Pat Robertson, a huggable 37-year-old with wire-rimmed glasses and a trim goatee. "They're God's gift for a second chance."

It was last April that Ennes started this dim den of spiritual cleanliness, a nondenominational church he calls Gateway. The place has the trappings of a suburban, evangelical, come-as-you-are church. But Ennes possesses a different goal: to bring spirituality to the growing number of young people living downtown. "I think we're playing a part in getting Cleveland back on its feet," says Ennes. "Downtown, there is a motto of 'Live, work, and play.' And we bring a spiritual element to it."

For a conservative Southern Baptist minister, it seems a bizarre undertaking, growing a church in the heart of a Rust Belt city run by Dems and drunks. But Ennes has the gold-star spiritual makeup for such a challenge. He's cut from the same cloth (and attended the same schools) as some serious evangelical power brokers, presidential candidate Mike Huckabee and The Purpose Driven Life author Rick Warren among them.

Ennes came to Cleveland in 2004, chasing love — not God's love, but online love. He'd met a cute, spiritually enchanting Cleveland woman on eHarmony.com. After a courtship of e-mails, phone calls, and a special Easter visit, he moved to Cleveland, got married, and took a job as pastor at a church in North Olmsted. But the suburbs bored him, he says. He wanted to traverse more challenging spiritual terrain. In Cleveland's downtown, he found his evangelical Everest.

He called the leaders of his church in North Olmsted and one back home, the 1,300-member First Baptist in Fort Smith, Arkansas. He sought their help — both spiritual and financial. And while the cities could hardly be more different, the elders in Arkansas liked his vision of a downtown do-right center.

"We were really looking at Cleveland as a good place for a church plant," says Tim Singleton, assistant youth minister at First Baptist. "My impression from visiting was that it didn't have a lot of churches downtown. I mean, there's the Old Stone Church. But that is kinda like going to a museum."

That Ennes had his eye on a basement comedy club in a booze-fueled entertainment district only helped convince First Baptist. Maybe they could show some folks up north that Baptists can have fun — and be funny — too. "I always like to tell people that I couldn't make it in the comedy world," says Ennes. "That's why I became a pastor."

But convincing the comedy club didn't prove as easy. Hilarities owner Nick Kostis makes his living trafficking the lewd, the crass, and the occasional crack on religion. He was naturally skeptical about an Arkansas conservative putting a church in his club. So before he considered the idea, he had to know every last detail. "He asked me in a very serious voice," recalls Ennes, "'What are you going do with this service? And will it involve fire?'"

Ennes chuckles at the memory. But Kostis was dead serious. He's seen his share of prop comics over the years and learned to cover his bases. "I approach it on safety," says Kostis. "I mean, do you dive from a platform into a vat of boiling oil? Do we sacrifice a lamb, boil a chicken? What do we do here?"

Among those there that day was Steven Hart, a 22-year-old graphic-design major at Cleveland State. He's just the sort of guy Ennes wants to reach: young, smart, and hip to the whole Christ thing. Hart lives across the street from Gateway in a two-bedroom apartment above House of Blues.

In conversation, Hart plods through the religious aspects of Gateway. But he's downright chipper about the amazing acoustics inside Hilarities. To Gateway's members — mostly young people with loose relationships with religion — that their worship hall is a comedy club only seems to make waking up on Sundays easier.

"It helps break the stereotypes of a church," says 23-year-old Jill McDonald, from Olmsted Falls. "It shows that a church is a body of people instead of a place."

But selling Jesus to downtown's young, busy, and often hard-partying set has proved tougher than Ennes expected. For many downtown, Sunday is a day that begins after noon with the uncrinkling of bar receipts and prayers for a two-digit total. While the church's attendance has remained steady, it hasn't grown, and much of its flock commutes, oddly enough, from the suburbs.

Ennes hopes a new marketing campaign can spark interest. It includes more mailings and fliers, as well as audio recordings of his sermon online. He says he's confident his church will flourish. But behind his certain words are glossy red eyes, tired from the lack of sleep that's standard with a new business.

After his sermon, Ennes makes his way offstage, toward the back of the theater. It's where he stands for the rest of the morning, talking to members as they depart. Many thank him for his words. This week, he connected the story of Jonah and the giant fish to Tiger Woods, New Year's resolutions, and repentance. It was an eclectic story, full of optimism. At times, it even had people laughing.