Can Cleveland use property taxes to prod intransigent developers? 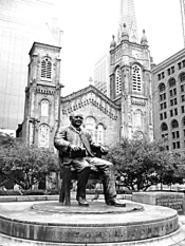 When support for the new convention center collapsed, so did the hopes of developing Scranton Peninsula, a scrubby thumb of land in the Cuyahoga River valley. The 70-acre cape has an industrial past, an almost nonexistent present, and the potential to be an invigorating downtown neighborhood. "There's something about it," says Charles Scaravelli, who owns six acres on the peninsula. "It's a very attractive place. You're in the city, and yet you aren't."

Forest City Enterprises teased the idea of a habitable peninsula -- housing! shops! parks! -- when it sought the site of a new convention center. Build at Tower City, company officials said, and a mini-metropolis will be born across the river.

Forest City had hyped similar plans in 1989, after it gained control of much of the property, but nothing happened. The convention center's implosion has the company reverting yet again to squirrel mode. "It will sit for a long time," the co-chairman of Forest City, Sam Miller, said of the peninsula.

It's a story told often in Cleveland and elsewhere: Developer doesn't get everything he wants; developer takes ball in bony, liver-spotted clutches and goes home. Cities are left to grovel, offering tax abatements like dowries for a homely daughter.

There may be another way. And it's right under our feet.

It's called land-value taxation, a scheme by which property taxes concentrate on land rather than buildings. The current system effectively punishes property owners who improve their lots, be it with a high-rise or a screened-in porch. Slumlords and speculators, meanwhile, enjoy lower taxes for keeping their land idle and neglected.

A quick example: The county auditor says the WKYC-TV studio on Lakeside Avenue is worth $12.6 million. Most of the property's value ($9.3 million) is derived from its recently constructed building. The net real-estate taxes are $158,000.

A few blocks east of WKYC, on a parcel of similar size, is a parking lot. Striped asphalt is not much of an improvement, so the property is assessed at $2.1 million -- and the taxes are just $26,500.

The idea of taxing land and not buildings is credited to Henry George, a 19th-century populist. George held that society made land valuable, so society should receive the benefit. He promoted a single tax on land and the elimination of all others. George greatly influenced the public life of Tom Johnson, the visionary businessman who was elected mayor of Cleveland in 1901. The Johnson statue on Public Square clasps a copy of George's manifesto, Progress and Poverty.

The single tax didn't sweep the nation as George and Johnson might have hoped, but the concept survives, mainly in Pennsylvania. Harrisburg shifted to the system in 1979. Until a few years ago, Pittsburgh taxed land at six times the rate of buildings. (City leaders scrapped the "two-tiered" tax at the howls of residents in tony neighborhoods. After years of artificially low assessments, taxable real estate in the county shot up in value by 48 percent.) Around the world, cities such as Sydney, Johannesburg, Copenhagen, and Edmonton have adopted the idea.

Land-value taxation's appeal is technical as well as philosophical. The Center for the Study of Economics in Philadelphia pushes the tax as a means for cities depleted by urban flight to recapture investment in labor and capital. In the ideal, the high cost of holding property forces land owners to be constructive or sell. Prices drop, as more land becomes available. Sprawl is discouraged by the new rewards for compactness.

"We have essentially engendered the best possible use of the land," says Randy King, a spokesman for the mayor of Harrisburg. "There aren't a lot of speculators holding onto property for future sale."

Really, land-value taxation is among us already -- it's just implemented arbitrarily. Josh Vincent, the executive director of the Center for the Study of Economics, says land-value taxation "is the universal application of [tax] abatements that the big dogs always get. LVT applies to everyone, and you don't have to trudge down to City Hall to apply." A study of Philadelphia showed that, if the city adopted a land tax, 78 percent of homeowners would see their property taxes fall.

Dr. William Peirce, the retired chair of the economics department at Case Western's Weatherhead School of Management, has long advocated the land tax. He agrees with Vincent that it benefits folks who lack the clout to negotiate tax breaks. "A lot of people are afraid to get building permits, because they think it will automatically add to their assessments," he says. As a result of this fear, neighborhoods suffer.

Cleveland, which does not starve for suffering neighborhoods, seems to beg for the abstract virtues of the land tax. The flaws of the current system were exposed two years ago, when the city sought to reclaim property near the Galleria that was sold to Richard Jacobs in 1987 in exchange for his promise to put up office towers. Instead, Jacobs paved a parking lot at East 12th Street and St. Clair Avenue. Because the taxes were so low, Jacobs was able to turn a risk-free profit -- and a potentially productive piece of property collected oil drips.

Any opportunity to discourage surface parking appeals to Chris Ronayne, the city's planning director. Mayor Campbell wants 1,500 new housing units a year, and Ronayne says half the gains will be made downtown. Or at least, he hopes so. "The downtown being the most unique neighborhood in all the region, there's a market for for-sale housing -- we've just got to create product," Ronayne says. "The major conundrum to the creation of that product is surface parking and the operators' unwillingness to sell, because the revenues are so good."

Ronayne says he is "intrigued" by the idea of a land tax (he knew nothing of the concept before Scene presented it to him), as are others. "It's pretty theoretical, but there's some merit," says Dr. Robert Simons, a Cleveland State professor of urban planning and real estate.

Tom Yablonksy, the executive director of the Historic Gateway Neighborhood Corporation, supports the eradication of surface parking, but he worries about the detriment to existing tools, such as conservation easements, that aided in the rescue of the Warehouse District. (Easements safeguard historic buildings -- or undeveloped land -- by requiring future owners to keep them as they are.) David Beach, the director of EcoCity Cleveland, sounds a similar note: "It gets interesting, because there are lot of tradeoffs," he says. "You start messing with the tax system, and you get a lot of unintended consequences." It is possible, for instance, for a land tax to prompt speculative overbuilding.

A Cleveland developer is skeptical of such a "radical departure." David Browning, the managing director at CB Richard Ellis, does not believe that a land tax would guarantee new construction. "Property taxes are not the main driver of whether a development happens." He adds: "There are a lot of well-heeled developers who would build right now, if they thought there was demand."

Vincent, of the Center for the Study of Economics, agrees with Browning that taxes are but one factor in the decision to build. "Yet a developer is often the first to bitch about the lack of 'incentives' in a town, so they 'must' go elsewhere," he says. "If taxes don't count, why do these abatement programs get tossed about so freely?"

Vincent knows something about going elsewhere in Northeast Ohio. He grew up between Stow and Kent. The dusty roads he remembers from childhood are now four lanes wide, to accommodate strip centers and single-family homes. "Did the population explode in the region? No. Akron just emptied out. There's got to be a reason and a better way."

The Center for the Study of Economics "would be champing at the bit" to perform or assist with a study of Cleveland to see whether a land tax is practical, Vincent says. His group has never charged more than $5,000, he adds.

Feasibility is another matter. Shifting to a land tax is likely to require state-enabling legislation or even a constitutional amendment. A year after Johnson's death in 1911, the single-taxers were trounced at the Ohio Constitutional Convention. Article II forbids the levy of taxes on land at a higher rate or by a different rule than improvements, encumbering cities with what Peirce calls a "disastrous" property-tax system.

The hoarding of Scranton Peninsula may prove his point. According to the city's calculations, Forest City and other speculators pay $436,000 in annual property taxes -- a pittance for acreage nearly the size of the CSU campus and within walking distance of several downtown attractions. Ronayne, for one, is frustrated by the system that puts Cleveland's best assets in cold storage for the benefit of a few opportunists. "The worst thing in the world is decades of squatting, waiting for a building boom that transcends our generation."