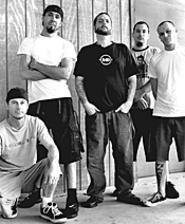 Compared to their New Orleans scuzz-metal peers (Eyehategod, Superjoint Ritual, Crowbar), the members of Soilent Green are overachievers. They're a genre-hopping act in the vein of Mr. Bungle or Naked City, except that just about all the styles the band spans in its hyper-abusive songs are variations on "extreme" music. There's a little doom, a little grindcore, a little Florida death metal, a little southern rock, and quite a bit of the raw pain that seems to suffuse the work of all the best Big Easy metal bands.

Rapid shifts in style aside, the songs on the band's latest, Confrontation, follow a definite formula: They're fast and somewhat thrashy, with overly showy drumming that's high in the mix to make room for the downtuned guitars. There aren't any choruses or solos to speak of, just vocalist Ben Falgoust ranting on and on in his hoarse growl. He's a captivating frontman, switching ably between a death-metal bark and a howl reminiscent of Black Flag's Dez Cadena. Unfortunately, the music is just too much, packed too tight. Because no concessions are made to melody, Confrontation quickly becomes a disorienting and wearying listen. There are five minute-long instrumentals breaking up the disc, but they're not enough to make it friendly to most ears.