The Work of the Artist Solo Flyer (www.soloflyer.com) 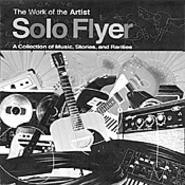 Solo Flyer frontman Matt Jauch sings with a stutter, a deliberate hiccup that makes him sound as if he cut his vocals while cruising Cleveland streets looking for potholes. Girls either take him ho-ho-home or they tear him ap-a-a-art. It's an amusing enough conceit, which, in a way, helps to define his band: Solo Flyer is all about making minor tweaks on established forms to subtly distinguish its open-armed rock and roll.

It makes the band's debut album deceptively infectious: You don't realize how catchy it is until you find yourself humming half the tunes the next day. The disc is a collection of demos recorded between 2001 and '04, laid down in bedrooms and studios, highlighted by the all-shook-up album opener "Catch Me It's Too Late," the porcelain ballad "Chemical Coroner," and the new-wave-inflected "Dance Floor Queen," which sounds like the Cars in third gear.