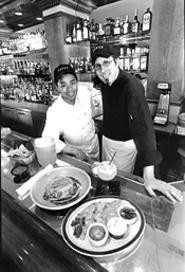 It was way back in 1979 that restaurateurs Brad Friedlander and Craig Sumers opened Lopez y Gonzales on the corner of Washington Boulevard and Lee Road, and their timing couldn't have been better. Hip Cleveland Heights was the place to be. Northeast Ohioans were just discovering life beyond Brown Derby. And Mexican food seemed fetchingly exotic.

With a setup like that, their success was pretty much ensured. Even the presence of now-legendary chef Rick Bayless in the kitchen was just a bonus; when Bayless moved on to Chicago -- and eventual fame and fortune with his top-rated Mexican restaurants, Frontera Grill and Topolobampo -- East Side diners continued to beat a path to the dining room's door, regardless of who was running the range top.

But times change. After 19 years, Mexican food -- the good, the bad, and the scary -- had become ubiquitous. Business had reached a plateau. Besides, the partners had another success on their hands in Beachwood's upscale Moxie. It seemed that Lopez y Gonzales had run its course, and the restaurant closed in 1998.

Yet, despite the sombreros, the chihuahuas, and the oversized burritos that invaded the North Coast, there were still folks hungering for the former restaurant's fresh flavors and contemporary stylings. No doubt, these are the very people who are right now standing in line at Lopez, the reincarnation of Lopez y Gonzales that Friedlander and Sumers opened in December, in space less than four blocks from the original location.

Even on a Monday night -- a Monday -- patrons were lined up out the door and onto the sidewalk. While the crowd included the predictable crew of aging boomers, reminiscing about Coventry's glory days, there were plenty of fresh faces to be seen, many with their own little chicos and chicas in tow. Lopez, of course, is that kind of place: welcoming, friendly, and just cool enough to attract a whole new generation of fans.

While the handsome dining room is sleek and contemporary, tastefully done up in stone and wood, with copper accents and subdued lighting, it is still a work in progress. In the next month or two, it will be expanded by 60 seats, and a shaded outdoor courtyard will be added. For now, diners are packed elbow to elbow, and their happy chatter not only drowns out the background music (which, as far as we can tell, ranges from pulsating house to cheerful Spanish pop), but also makes it absurd to try to carry on a conversation that goes much beyond "mumph" and "yum." However, such inconveniences, along with Lee Road's always-impossible parking situation (give yourself a break and just fork over the three bucks for valet parking in Lopez's secret lot), only serve to whet the appetite for what's to come.

While Lopez is no Frontera Grill, Bayless's influence is still apparent. Dishes are likely to include contemporary, upscale goodies like wild mushrooms and mahi mahi. Treatments sometimes take inspiration from the best of world cuisine, and flavors are generally subtle and well rounded, but rarely relentlessly hot.

Chef Chinnawatt Scott has a soft touch that is well-suited to many of the menu items. Ample shrimp empanadas -- an appetizer of two half-moon-shaped pastries filled with shrimp, chiles, and cheese -- were dense, moist, and complex, and got a real boost from tangy crema fresca and a bit of finely diced jalapeño pepper jelly on the side. The result was a delicious medley of sweet-hot flavors that felt rich and well balanced on the tongue. A large roasted poblano chile relleno, wrapped in a crisp cornmeal breading and stuffed with cheese and a scant portion of wild mushrooms, exercised our palate with the pepper's own moderate natural heat, as well as with a spicy sauce of grilled tomato and guajillo chiles. Fresh-tasting and chunky guacamole, served in a little fried tortilla basket, was pure and unadulterated avocado. And a BBQ Beef Chalupa (a crisp corn tortilla, topped with tender shredded brisket, creamy Chihuahua cheese, and chopped lettuce and tomato) had a fine, sweet-and-smoky flavor, so good we nearly arm-wrestled over the last bite.

Still, while "subtle" is good, bland is not, and Scott's preparations occasionally tumbled into timidity. Sides of Mexican rice and refried beans were underseasoned and dull. A creative-sounding mahi mahi quesadilla (a soft flour tortilla wrapped around bits of grilled fish, sautéed pepper, and crema de limon) was nonetheless boringly banal. And a chicken-and-cheese enchilada suiza was a cheesy one-note wonder. Certainly, chefs shouldn't substitute fire for flavor, but these dishes could have been improved easily by more assertive seasonings and the judicious use of heat.

As a main course, do-it-yourselfers can roll up either al carbons or the similarly hands-on fajitas. The al carbon platters include a choice of chargrilled steak, boneless chicken breast, or portobello mushroom fillings, along with sautéed onions and peppers, refried beans, and flour tortillas. The fajitas (chargrilled steak or chicken only) substitute rice for the side of beans and add portions of sour cream, fiery chipotle sauce, and luscious pico de gallo. We tried the steak versions of each dish. In both cases, the medium-rare meat was juicy, if somewhat chewy; in terms of flavor, the marinated al carbon filling beat the fajita's blackened beef, hands down.

Plenty of diners choose their Mexican restaurant by the quality of its margaritas, and here, Lopez is a contender. The frosty $5.50 cocktails, blended with freshly squeezed lime juice, are confidently piquant and reasonably muscular, and provide a zesty match to the restaurant's thick, lightly salted chips and hearty salsa, which hums with the flavors of fresh cilantro, garlic, onion, and jalapeño. For really tough hombres, the bar stocks a fine selection of top-shelf sipping tequilas, like Patron Gold and Don Eduarado Anejo; a "tasting" selection of four one-ounce shots ($13.75) immediately stirred the soul of our party's own tequila connoisseur. A brief but thoughtfully assembled list of Spanish and West Coast wines, and a collection of imported and domestic beer, provide other high-octane options.

Aromatic Mexican coffee, flavored with brown sugar and cinnamon, helped us make a smooth transition from the savory to the sweet portions of our meal. The short dessert list includes an average flan (firm and eggy) and an adequate version of fried ice cream (with a disappointingly soggy chopped-peanut-and-cornflake-coating but some very good chocolate sauce). More interesting was the well-crafted warm Mexican Pecan Tart, with a tender shortbread crust, a sweet but not sugary filling, and a scoop of excellent homemade vanilla-bean ice cream on the side. And someday we hope to have room inside our waistband to try the capirotada, a warm bread pudding with nuts and raisins, served with homemade cinnamon ice cream.

In the face of endless hordes of diners, both the servers and the kitchen crew appear to be holding up admirably. During our two visits, service was efficient, the kitchen made no errors, and tables got turned at a brisk pace -- which is no less than one would expect, with pros like Sumers and Friedlander at the helm. And while Gonzales apparently skipped town sometime after 1998, it's a pleasure having Lopez back on the scene. Wherever the G-man has headed off to, we bet his former partner is better fed than he is.