Some Kind of Monster

After three decades in fishnets and bondage gear, the Cramps are still creepy. 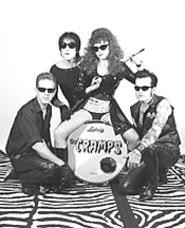 "Nothing we do is meant to be a parody or campy joke." So says Cramps frontmanimal Lux Interior in the liner notes of their latest rarities CD, How to Make a Monster. This may be something of a revelation, since the Cramps have become icons of kitsch kookiness. Their ability to write tunes called "It Thing Hard On" and "Journey to the Center of a Girl" while wearing vintage bondage gear and to stay focused enough to sustain their status for 30 years as the house band of the deteriorating American Dream proves that it isn't as easy to assess the Cramps' story as it is to enjoy the trashy fun.

Their gag was a flat failure at first, since when they began, Genesis scoring laser-beam exhibitions was considered proper musical work. Meanwhile, the Cramps assumed that guitars tuned themselves, as they ripped through Charlie Feathers B-sides and tried desperately to look like sexy decomposed starlets from '50s B-movies.

In the face of all the baloney about musicianship back then was the fact that Lux's main inspiration came from such Cleveland media pioneers-wackos as Alan Freed, Mad Daddy, and especially Ghoulardi. "Man, those DJs were as crazy as the records," recalls Lux, aka Erick Purkhiser, a native of Akron. "The beginning of the counterculture of the '60s, really."

When it came to embracing the underbelly of pop culture, the Cramps were way ahead of the curve.

"When we first started out, I didn't know anybody who even heard of Bettie Page," Lux explains. "It's hard to imagine that now, because there's such a strong -- I don't know -- trash culture, custom-car culture, whatever. It's so omnipresent now. Before we started our band, we'd tell people we were going to play rockabilly, and they'd say, 'What the hell is that?'"

It was an odd ambition, born of the boredom of the Rust Belt into which Lux and guitarist Poison Ivy had settled by the early '70s. No good clubs or art galleries, but a gold mine for junk collectors such as these.

"Man, the junk stores in Cleveland in the '70s, when we lived there. It was like buried treasure!" Lux exclaims. "Plus, if you're finding records, you find all kinds of other crazy crap."

The obsessive activity of slobbering over a box of 45s found under a pile of talking dolls, Mexican movie posters, and other "useless" ephemera is the universally recognized disease of most alt-lifestyle types today, and the Cramps were the template.

Now the Cramps act as their own crap consultants with the release of Monster, a tasty collection of unearthed early demos and live tapes. The live stuff shows how they progressed from their sloppy start, once they nabbed former Clevelander and Electric Eels drummer Nick Knox. But most revealing are the surprisingly candid (for such reclusive types) liner notes, as well as the 1976 demos proving that Lux had to come around to his petrified Presley persona. No, Cramps fanatics, he did not pop out of his mommy's uterus sporting lamé undies and a pompadour. Turns out the echoplex machine they were using to make Lux's vocals sound all Sun-Studios-warbly broke down, and being penniless, they were unable to fix it. So he tried to imitate that echo, and that's how the vibrating vampire vox emerged.

We also learn some more details about how Ivy came from the left coast and Lux inveigled her back to Akron. The band finally came together in 1975, within the New York City CBGB's scene, then dragged its makeshift museum of dime-store relics and fright-flick garb out to its most suitable resting place, the Hollywood hills, where the members reside to this day.

But in compiling their past, are they in danger of dismantling the mystery that's half the fun of the Cramps?

"There's a little concern," admits Lux. "We didn't want anybody who maybe always heard about the Cramps, but never bought any of our records thinking, 'Hmm, I'll check this one out.' So we put a disclaimer on the back that says 'For Cramps fiends only.' Our fans are so maniacal, and there's so much misinformation out there, we thought it's a good idea to do something like this."

Lux's deft sidestepping of the question suggests that the Cramps are happier without the answers. What they're not happy about is the runaround of dealing with major labels. After years of bouncing around from one to the next, Lux and Ivy decided to buy back their catalog from all the parties in 2001 and start re-releasing it on their own Vengeance label.

"We've got an Egyptian curse on us," says Lux. "Every time we put a record out, the record company goes out of business or something. Like when the head of Epitaph said he'd spend every dime he had to break the Cramps. And I know he would've, but he was arrested a week after the record came out. The guy who took over wanted us to give back our advance, because he didn't like the Cramps. So stuff like that would happen. Then you spend the next two years with lawyers getting another deal. And it's just a big waste of time. So now we can control that stuff. But anytime you're in a rock-and-roll band, instead of pop or commercial or whatever, you're going to have a tough time."

Not that any of that nonsense has stopped the band from continuing its sleazy quest. How can someone the age of Lux -- who actually saw Elvis perform in the '50s, so you do the algebra -- still do all that touring? Anyone who's seen the Cramps knows that they don't skimp on volume or stage-crawling antics.

"It's just fun, it really is," he says. "We've always been excited by how exciting rock and roll was when it first started, the riots and everything. We're always hoping that we can have something to do with keeping that energy around. That's what rock and roll is all about -- not U2 saving the rainforests or emo or any of that crap people call rock and roll now."