Ten years before short hair, Napster, sobriety, and group therapy for Metallica, there was Metallimania. 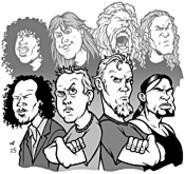 When the award-winning Metallica documentary Some Kind of Monster was released on DVD late in January, it came bundled with a disc of bonus footage. Now fans could enjoy even more whimpering about how fucked-up it is being Metallica. More of the band members telling each other off. More of their resident Dr. Phil (Towle) giving advice even Jerry "Final Thoughts" Springer would laugh at. But as train-wreck riveting as all of this is, nothing provided by filmmakers Joe Berlinger and Bruce Sinofsky gives any indication of why Metallica has been America's biggest heavy metal group for more than two decades, or how deep their fans' devotion goes, or how the band feeds off their energy. It's all of the burden, but little of the proof.

In a perfect world, Some Kind of Monster's bonus disc would've been Metallimania -- a hotly traded, bootlegged, and coveted documentary made in Phoenix by Killing Time Productions from 1994 to 1996 that humorously captured the band and the outer limits of fan worship in a pre-Napster world. Like Monster, Metallimania was also financed with Metallica money for the band's own private amusement, a way to document what was then the longest tour of its career: nearly three years playing all over the world in support of its self-titled 1991 album.

Cribbed from thousands of hours of camcorder footage taken at outdoor festivals, Metallimania freezes in amber for future generations the group in its last mullet-wearing "Alcoholica" days and some of Metallica's drunkest, scariest, and most confused devotees. Now Metallimania is being made available to fans on DVD for the first time through Killing Time's website (www.killingtimeproductions.com).

Uniquely qualified to bring you this story are Marc Paschke, one of the few intimates who's flown around the world with the band on its private jet, and Eric Braverman, onetime radio DJ and manager of Flotsam & Jetsam, and best man at Jason Newsted's wedding. But Paschke and Braverman didn't just follow around Metallica and its nutty fans. "We kind of went after them," says Braverman, laughing.

As Metallimania's onscreen reporter and antagonist, Braverman continually praises Metallica for building up the house of metal while airing the grievances of fans who silently stew about the band "selling out to MTV." And he is persistently baseball-capped and sporting a beard that looks like one of those long fake ones that attaches with a rubber band. (Today, it's still his look.)

In the past, Braverman had written many articles lampooning Metallica for So What, the group's official fan club magazine. "The guys in Metallica have always appreciated our small contribution to their legacy, which was making fun of them and their fans," he says. "But because the movie plays on the myths of Metallica -- Are they total alcoholics? Are they satanists? Is Lars Ulrich that much of a dick? Is James Hetfield really that intimidating? What planet is Kirk [Hammett] really from? -- it was felt by the band's Hitleresque management that the fans wouldn't get a film that made the band look ridiculous. In retrospect, it's hard to imagine a film that could make Metallica look more ridiculous than Some Kind of Monster."

Ironically, Paschke had suggested the idea of documenting the making of an album to the band years ago, and the members felt that cameras would be obtrusive to the creative process. But back then, they didn't have a 40-grand-a-month therapist telling them it was a good idea.

"I guess the really big difference is they spent $4 million on Some Kind of Monster and we spent, like, 400 on Metallimania -- and ours has Madonna," says Braverman. And unlike its big-budget counterpart, Metallimania is informed by years and years of traveling with the band and watching it work, not fall apart. And of course, by those zany fans.

"There's a lot more fan shows now on VH1, but there was nothing like that back then. We wanted to go for the real hardcore heavy metal fan and also thought it was funnier to hear people saying the negative stuff," says Braverman, "so when you go to a summer festival and you've got 30,000 people to pick from, and you see a tweaked-out guy who's been up for five days alternately loving and disparaging Metallica, he's going to star in your movie."

Besides wasted fans, we hear anecdotes from the band's peers, like Rob Halford, members of Anthrax, Queens of the Stone Age, and Slayer, all vying for a chance to roast their rivals.

"I think Lars will start a therapeutic commune for sensitive men." -- Jim Martin of Faith No More on Lars Ulrich's future calling

Ultimately, it's the band members themselves who prove Metallimania's biggest draw, and Braverman's flip questions foreshadow every problem that will bite them in the ass in the later film.

You see James Hetfield, the unrepentant Coors Light spokesman, unable to comprehend why his peers find him scary and intimidating. You can see the widening rift between the band and Jason Newsted, with the bassist candidly admitting that it's not fun working with Hetfield. You see Lars Ulrich being ridiculed for not having any friends, years before becoming the most hated man in rock thanks to his crusade against Napster.

Paschke and Braverman's relationship with the band continues to this day. What's changed since Metallimania? "Their accessibility to nonsense or their willingness to just have wacky drunkenness going on," Braverman says. "It's a lot more under control."

Braverman has appeared in subsequent Killing Time productions like Airmania, about people who like Michael Jordan too much ("Metallimania for kids"), and he and Paschke recently put together Slayer's War at the Warfield DVD. But Metallimania still generates a lot of mail from all over the world. And occasionally, Braverman runs into fans he interviewed at a show. No one seems pissed that he or she never signed a release form. "I even saw that tweaked-out kid who was up for five days at some show not too long ago. Came up to me and shook my hand," he recalls. Like Braverman, he looked as if he hadn't changed one atom. "Yes, he was still tremendously fucked-up."