by D.X. Ferris and Michael Gallucci 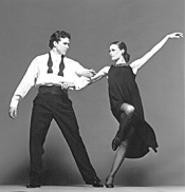 For its Cleveland debut, the Miami City Ballet is offering a mixed program featuring Nine Sinatra Songs, Ballo della Regina (based on a Verdi composition), and Stravinsky Violin Concerto. "It shows three different manners and approaches, in terms of style and periods," explains artistic director Edward Villella. "It's fun, but there are dimensions and different points of departure." Okay, we get the Verdi and Stravinsky connection (both choreographed by dance legend George Balanchine), but Sinatra? Ballet? That could get a person killed! "This is the 21st century," says Villella. "We have a stereotypical idea of classical ballet being a 19th-century, traditional spectacle. The 20th century changed all that. And Sinatra's a great artist. To have another great artist, [choreographer] Twyla Tharp, interpret him is reason enough to do this. And it's certainly accessible to people who aren't accustomed to classical ballet." Start spreading the news . . . Performances are 8 p.m. Thursday through Saturday and 2 p.m. Sunday at the State Theatre, 1501 Euclid Avenue. Tickets are $15 to $63; call 216-241-6000. -- Michael Gallucci

All by His Elf

A desperate, unemployed David Sedaris once took a job as a department store Santa's helper and then recalled the experience in The SantaLand Diaries. The subsequent NPR readings became the keystone to Sedaris's career as a jaded memoirist. His latest book, Dress Your Family in Corduroy and Denim, begins with a Halloween story, "Us and Them," in which the writer recalls childhood neighbors who had the audacity to trick-or-treat a day late. Pressed by his tolerant mother to surrender some of his hard-won candy, a young Sedaris chooses to hurriedly devour his entire stash instead -- even though chocolate gives him headaches. Grave matters made funny don't quite make for a happy fall holiday, but they set the mood perfectly. Sedaris is at the Ohio Theatre (1519 Euclid Avenue) at 7 p.m. Sunday. Tickets are $30 and $35; call 216-241-6000. -- D.X. Ferris

Brooklyn's Mobius Band takes delight in the sounds found between the cracks. Like its post-rock contemporaries, this sleek and smart trio crafts songs that work on a couple of different levels: Indie kids dig the lo-fi jangle of the guitars; technophiles appreciate the sequenced squeals and squalls. A new record is due this winter. In the meantime, the group is on the road, playing songs from it, as well as from its three EPs. The Mobius Band plays the Grog Shop (2785 Euclid Heights Boulevard in Cleveland Heights) at 9 p.m. Friday. Tickets are $8 in advance, $10 day of show; call 216-241-5555. -- Michael Gallucci