September 27, 2006
comment
This Film Is Not Yet Rated Cedar Lee Theatre 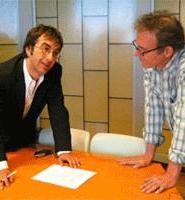 Among documentary muckrakers, Kirby Dick may not be as righteously indignant as Michael Moore or as brilliantly droll as Nick Broomfield. But say this for the maker and star of This Film Is Not Yet Rated: He's not afraid to soil his hands to get the story. Rummaging through the garbage of a woman he has identified as a secret member of the movie ratings board, Dick plucks out a page of classified screening notes pertaining to last year's Get Rich or Die Tryin': "Penis and ass-cheeks exposed," the report eloquently says of the prison scene that evidently helped the 50 Cent movie earn an R (under 17 not admitted without parent or guardian). Well, now we know.

Likewise caught with its pants down, the Motion Picture Association of America (MPAA) appears suitably ridiculous in This Film Is Not Yet Rated, which reaches well beyond the dumpster to find the dirt on this self-appointed group of moral watchdogs and de facto censors. Dick climactically submits to the board his own sex-filled movie, a penetrating survey of what has and hasn't been deemed appropriate for wide distribution -- and, naturally, receives an NC-17 (no one under 17 admitted, no ads allowed by most newspapers and TV stations, no booking in many theater chains, no stocking in Wal-Mart). Undaunted (and still shooting!), the filmmaker then takes his case to the even more shadowy appeals board -- populated, he discovers, by corporate film-biz execs whose undoubtedly objective determinations are observed, for good measure, by two priests. God works in mysterious ways, though it's maybe no wonder that The Passion of the Christ got away with an R.

Dick, who hilariously hires private detectives to trail presumed raters from the bureau's fortress-like headquarters in Encino, suggests that only the CIA is allowed to operate in as much secrecy. All this to keep pelvic thrusts out of Eyes Wide Shut? Aside from kids, who is the MPAA in business to protect? Perhaps the most chilling material in This Film Is Not Yet Rated -- whose independent producers declined to accept the board's voluntary rating or to cut the film in trade for greater exposure -- is a simple statement of little-discussed fact: More than 95 percent of the movie industry is controlled by a half-dozen studios, whose larger conglomerates own more than 90 percent of all media in the United States. Ethical regulation of the industry -- in terms of how much of Maria Bello's pubic hair can be seen in the indie drama The Cooler, for example -- naturally remains of vital importance to the MPAA and its studio signatories.

This Film Is Not Yet Rated has a refreshingly snotty sense of humor: Archival footage of '60s White House insider-turned-MPAA chief Jack Valenti being immortalized in cement outside Mann's Chinese is accompanied by a truly horrifying children's rendition of "He's Got the Whole World in His Hands" -- the youth of America warbling their compulsory appreciation of Uncle Jack as he covers their eyes and cashes the check. Dick would put a banana peel out on Ventura Boulevard, if he thought a rater might slip on it. (MPAA employees don't walk, alas; they drive.) But there's a pill underneath all this sugar. Bello tells Dick's camera that the context of the offending Cooler scene -- love -- seems to be what made the raters more uncomfortable than body hair, particularly as director Wayne Kramer focuses close attention on her character's pleasure. Dick's assertion that women in movies can't come without consequences -- without the film's NC-17 or its producers' cuts to earn an R, that is -- gets ample corroboration, including testimony from Boys Don't Cry director Kimberly Peirce, who says the MPAA informed her that the Chloë Sevigny character's orgasm was "too long." (Scenes of violence against women are rarely if ever too long for an R.)

Will This Film change anything? Viewers at Sundance gasped and giggled at Dick's outing of Fox Searchlight and Landmark Theatres bosses as appeals-board members, although this would seem to be yet another indie whose impact is greatest at high altitudes. And while the movie's ingenious split-screen show-and-tell -- hetero/studio sex scene on the right gets an R, queer/indie sex on the left gets an NC-17 -- is unmistakably persuasive in fingering the MPAA for its prejudices, it isn't clear that those prejudices are compromising the bottom lines of the major studios that established this association and continue to pay its bills. This Film is for buffs, but ironically, it works best in the rare moments when it seems to be about more than just movies. Indeed, to the extent that the systematic sanitizing of content to serve big business interests is hardly unique to Hollywood these days, Dick's slapstick historical record does stand to have what they call a long "shelf life" -- even if they refuse to stock it at Blockbuster.