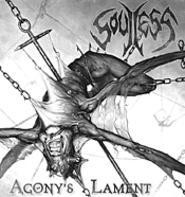 Breathlessly anticipating the upcoming live album from Kreator? Soulless's new one should tide you over. The Parma quintet cut its teeth on tribute albums to Metallica and Destruction, and its third release arrives straight outta '88. The heshers share a post-Christian motif with their Eurometal brethren. Singer Jim Lippucci is a guttural field reporter broadcasting live from a long day at hell's gates: Demonic brigades skirmish, the dark master dines on corpses, and various abysmal parties rip souls apart. Wayne Richards and Jim Corrick lead Teutonic death marches up and down the fretboard; their six-string work stays in a tight metal groove, with occasional nods to Slayer and Testament. The vintage thrash salvo clocks in at 34 minutes with 10 songs, each one drenched in blooooood.