Matt Wroth lays it out for you. 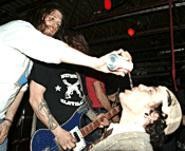 What have you been listening to lately?

A band out of Detroit called the Muggs just put out an amazing, self-titled record on a label called Times Beach. It's scorching blues-rock, with a definite whiff of stoner/'70s guitar jams. Danny [Methric] from the Paybacks leads the band on vocals and guitar.

Another new record that totally rips is We Ruin Fun by Killed in Action out of Columbus. It's a two-singer thrash assault. Live, they're completely insane, and I've seen them destroy many a venue and even play outside during a blizzard. The record matches the live set in every single way. Fans of Nine Shocks Terror should get into this fast.

What are some kick-ass Halloween tunes?

"He's Back," by Alice Cooper. This was from the Constrictor album and was also the theme song to one of the Friday the 13th films. I always thought Jason Voorhees was going to chop off one of my arms if I listened to it too much (truth is, I still think this).

What records help you get in touch with your kinder, gentler side?

All right. The cat is going to be let out of the bag. I'm a pretty big fan of Jewel Kilcher. No joke, the guy who swings from the ceiling at the Grog Shop digs Jewel. This Way is her highly underrated second record, and not only does it get me in touch with my gentler side, but it makes me want to live in a van and play coffee shops at night.

What records make you envy the deaf?

Everything that I have ever had any sort of part in. I need to seriously remedy my utter distaste for myself ASAP.

I also remember thinking that Genesis was kind of kick-ass back when I was a kid, but I bought Invisible Touch on vinyl, and it took a lot of resolve not to light it on fire while listening to Nunslaughter and drinking cheap whiskey. "Land of Confusion" had a sweet video. That's it.