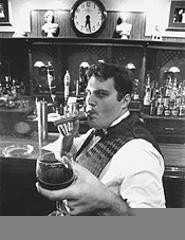 Pacing the sidewalk, a Pizza Hut at his back, George Harouvis cuts a strange figure. It's 11 p.m. on a Friday at Detroit and 117th, and Harouvis looks like a prom king. He's a big, handsome man in tuxedo pants, vest, and bow tie. But what prom king — or valet, for that matter — wanders a street corner shared by an aging drug store, a parking lot, a half-demolished building, and a chain pizza shop?

Harouvis is not a valet but the new owner of Koukla's, which used to be Brothers' Lounge, a neighborhood bar and longtime blues haunt on Cleveland's West Side. Koukla's looks everything and nothing like Brothers'. You walk in, and there's the bar to your left, the cozy wooden booths to your right. Keep walking, and the club fans open to a larger room with tables, chairs, and a stage. But sparkling blue paint has replaced dingy brown. The bar has been restored, and a new tile floor is underfoot. Pictures of the Rat Pack, as well as Harouvis and his friends and family, line the walls. Ceiling fans and track lighting give the club a warm glow.

"What they had was nice," Harouvis says of the fixtures Brothers' left behind; "it just needed a good cleaning."

Harouvis is trying to transform a shot-and-a-beer joint into a place where the bartenders have more than a passing knowledge of blended whiskeys and cigars. Instead of the blues, Koukla's will have piano music on weeknights and swing bands on weekends. Harouvis envisions Koukla's as a place where couples can dance the evening away or nuzzle over cocktails. "We're trying to get a place where you can bring a lady and not get bugged," he says.

On stage this night are the Belairs, an eight-piece big band of true pros. Their music stands are blocked from the audience by the tombstone-like guards that Lawrence Welk's boys used to use. It's easy to imagine the players as guys who conducted the high-school jazz band to a state championship year after year, or who backed Sinatra once on a fluke. To listen to them is to wish you had been less cynical and taken swing lessons.

Before you groan about a neighborhood bar getting yuppified (or loungified), realize that Harouvis is the nephew of the previous owner, Jim Rivers, whom Harouvis says is "in total agreement with what I'm doing." When Brothers' started booking blues bands twenty years ago, Harouvis says, there weren't many clubs in Cleveland that offered the blues. "Everybody's got a blues bar now," he says. Harouvis used to bartend at Brothers' as well as Around the Corner and the Humidor. The Lakewood grad lived in Vegas for a few years and brought back an appreciation for the era when Frank, Dean, and Sammy ruled the Sands. Koukla's will keep an eye on its clientele. This is not a place to guzzle Miller High Lifes and bark at the television in your grass-mowing clothes. "I'd rather have an empty bar," Harouvis says, "than a bar full of vulgarity."

Let the V-Rock backlash begin. Tia Marie Kavadas, a thirty-year-old Kent secretary who prefers to be called "Miss Tia," is organizing a letter-writing drive to challenge WSTB-FM/88.9's decision to drop metal in favor of modern rock. She is also talking with area metal bands and hopes to put on a show to protest the switch.

Miss Tia is angry not only about the change, but that there was no public discussion. The Streetsboro High School station abruptly signed off three weekends ago. Station Manager Bob Long said that WSTB will be on the air with its new format in mid-August.

A longtime V-Rock fan, Miss Tia believes WSTB overreacted to post-Columbine fears that metal was a destructive influence in need of check. She worries about the local bands who counted on V-Rock for airplay and Streetsboro kids who have nothing else to do but scarf burritos at Taco Bell. "This station was on the air for eight years, and now [heavy metal's] so bad?" she asks.

What does she hope the campaign will accomplish? "I don't know. I know one thing: They'll know they should have let people speak out about it."

One of the most frequently asked questions of the summer is, When are Bruce Springsteen & the E Street Band coming to town? "We hear rumblings about late September or October, and that's about all we know right now," says J.R. Lesniok of Belkin Productions.

Presently, Springsteen and Co. have dates booked in arenas in seven cities: East Rutherford, New Jersey; Auburn Hills, Michigan; Boston; Washington, D.C.; Philadelphia; Chicago; and Los Angeles. Springsteen is playing multiple nights in each city. One thing to keep in mind: The Boss's schedule is open between his last show in Chicago on September 30 and his October 17 date in L.A.

You've read his prose, now hear his voice. Scene freelance writer Aaron Steinberg is working at WCPN-FM/90.3, and this week and last, he's substituting for Dan Bindert on the overnight shift (1-5 a.m.). "If [Music Director] Bobby Jackson doesn't want to strangle me for my rank taste in music," a sleep-deprived Steinberg says, "I may be on again sometime in August."

Three months after opening a vintage clothing/CD store in Lakewood, Cathryn Beeks is selling Uncommon Thredz to fellow musician Pepper McGowan (the former Pepper Acton). In September Beeks and Heather Gmuc will hit the road, playing campgrounds and youth hostels as a duo, until they arrive in California, Beeks's home state.

Before she leaves, Beeks will perform at FemFest '99 on August 14 at Peabody's DownUnder with the reformed Toe Head. She plans to stay in California, where her family lives, until November.

Beeks has also recently anthologized herself. Coaster is a fifteen-song CD featuring cuts from her old bands Junkqueen and La La Land.

Blossom notes: With a valid ID, college students can buy two-for-one lawn tickets to the August 5 Barry Manilow show. Bring a canned good to the Jewel/Rusted Root show August 10 and get "a small token of appreciation" from Rusted Root.

The Giants of Science have a CD release party for Hang Ups and All at Annabell's in Akron on Saturday, July 31 . . . Jim Clevo Productions has its fourth annual yard sale/music fair/garage jam this weekend at the JCP Complex. Detroit's Down Boyz play Saturday night . . . The eighth annual Krusty's Mallapalooza is Saturday, July 31, at Mall C downtown. Wild Horses headline, with help from Dubflex, Mother Train, and DJ Packy Malley. The show benefits the Malachi House, an Ohio City hospice.