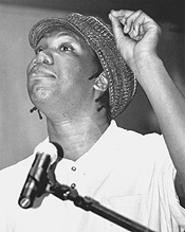 Lured by the prospect of free food, Soundbites rolled up to the Rock and Roll Hall of Fame early Friday morning for the live taping of the Russ Parr morning show, which was being broadcast locally on KISS 107.9. Parr was doing his show there to kick off Hip-Hop: A Cultural Expression, a three-day conference put on by the Hall of Fame and the Cleveland State University Black Studies program. While the spread of food was decent, listening to Parr relentlessly stroke the egos of his interview subjects, particularly rapper KRS-One, was more than we could endure. After a few danishes and a glass of orange juice, we bounced. This was just the beginning of a weekend-long lesson in Ebonics that, in the end, added up to little more than a lot of half-baked theories about the meaning of hip-hop and the importance of its past. Ultimately, the conference could have used more music and less talk.

After the early morning stop at the Hall of Fame, it was on to Cleveland State for the keynote address, which was delivered by KRS-One. The conference was running on what organizers called hip-hop time (this meant that everything was thirty to forty minutes late, and some panelists didn't even bother showing up). But that didn't prevent hyperbolic introductions from Cleveland City Council member Joseph T. Jones and Hall of Fame CEO Terry Stewart, who boasted, "I think this will be the new Woodstock." Never mind that Woodstock was a concert and this was a conference.

For his part, KRS-One proceeded to debunk the basis of the event — that hip-hop was twenty years old. He ran through a list of events that happened before the so-called inception of hip-hop in 1979 with the Sugarhill Gang's "Rapper's Delight." KRS-One, who can be a compelling speaker, was usually on the mark. Too bad that he had to take time out to hype Reprise Records (where he's a vice president of A&R) and an organization he runs called the Temple of Hip-Hop. He also agonized over insignificant details, saying that hip-hop and culture should be rewritten as "hiphop" and "kulture" to accurately reflect their African American nature. Whatever.

At least KRS-One wasn't as obnoxious as the panelists who discussed "The Censorship and Policing of Rap Music." Originally, Soundbites was excited to see that Angela Davis, the famous black activist, was the moderator. Unfortunately, it turned out to be a typo, and it was Angela Nelson, an associate professor at Bowling Green State University, not Davis, who was moderating. The panel itself consisted of a group of students and professors from Bowling Green (whose popular culture studies program does academic studies a disservice by promoting fan-like approaches that often lack anything resembling an argument), who could hardly say a word without making a reference to capitalist exploitation. Soundbites gives props to the woman who got up and mumbled "I can't take this shit" as she walked out. Neither could we.

One of the better panels presented that day was moderated by Alan Light, editor of Spin magazine. More about what goes on behind the scenes in the production of rap music than an abstract rumination on the meaning of hip-hop, this panel brought together producers Prince Paul (De La Soul, Gravediggaz, Chris Rock) and Rico Wade (TLC, Goodie Mob, Outkast) — Marley Marl was a no-show — to discuss what makes a record sound good because, as Light put it, "whatever the politics, if it doesn't sound right, people won't hear it." While Wade seldom gave direct answers and followed every comment (no matter how slight) with a slurred "know what I'm sayin'," Light kept him in check and was one of the few moderators who really knew how to moderate. Paul, who described himself as a "high-risk liability" when it comes to producing, because his tastes are so unconventional, expertly discussed the difficulties of working with egotistical MCs and dealing with music industry nonsense.

Later that night, the Hall of Fame threw a party that featured performances by Prince Paul, the Last Poets, and the X-ecutioners. Soundbites has seen all these cats before, and they each gave above-average performances, especially the Last Poets, whose aggressive delivery (particularly in the rant "Niggas Are Scared of Revolution") was one of the highlights of the entire event. That said, the party's atmosphere still lacked something; perhaps the fact that the drinks weren't free put a damper on things.

Saturday consisted of another day of panels concerning the finer points of hip-hop. At "Is a Rapper an MC?: A Discussion," most of the commentary was trivial, but the impromptu freestyle session that took place before the panel began represented one of the event's highlights, as Grandmaster Caz took over on the turntables while Ras Kass and Rahiem rhymed on the microphones. But once the "discussion" began, things deteriorated. As rapper Ras Kass, one of the few West Coast rappers at the event, said, "You got the wrong niggas here to answer that question." According to the panelists, MCs are true artists, and rappers are sellouts. This was said in twenty different ways over the course of an hour.

Rapper Chuck D's keynote address on Saturday afternoon was a rambling, hour-long diatribe that didn't make much sense either. One of the few participants to make any mention of the deaths of rappers Tupac Shakur and Biggie Smalls, Chuck D, who fronts the group Public Enemy, did touch on issues that others, in their yearning for hip-hop's glory days, didn't. Yet Chuck D admitted he didn't know the significance of Shakur and Smalls's deaths, and instead urged the audience to "master the technology before it masters you." Duh.

Nelson George did better in his simple closing speech on Sunday. George, a journalist who covered hip-hop back in the day for the Village Voice, presented a series of memories, both good and bad, associated with hip-hop. His conclusion: "The true strength of hip-hop has nothing to do with Master P, Puffy, or any of that shit."