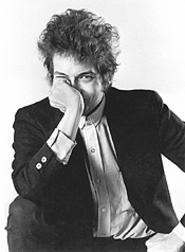 Photographer Daniel Kramer was in town last week to promote his exhibit of Bob Dylan photographs, which will be on display at the Rock and Roll Hall of Fame and Museum through January 9. The more than forty photos in the series were taken in 1964-'65, right as Dylan was on the cusp of fame, and show a youthful Dylan in a particularly freewheelin' light -- playing pool, hamming it up with Joan Baez, and reading the newspaper.

Kramer, who answered questions from Bob Santelli, Hall of Fame vice president of education and programming, admitted that he knew very little about Dylan when he started taking pictures of him. He said that seeing an inspiring Dylan performance on TV made him want to photograph the folk singer. So, after hounding Dylan management with phone calls, Kramer finally got permission to meet him in August of 1964 and, after driving with him to Philadelphia, took some of the first pictures that are included in the exhibit, including one in which Dylan is walking down the street in a goofy-looking top hat.

"I'm sorry to say I didn't do any research before meeting him," Kramer says. "I just knew that what he was doing was interesting. That he could say the things he said and make me stop dead in my tracks indicated that he was saying something of value."

Eventually, Kramer got permission to take whatever photos he wanted, and he says that Dylan, who is known for being particularly reclusive, even allowed him to walk on stage whenever he wanted. Some of the best live footage captured includes a silhouette of Dylan and Baez that was taken from the rear of the stage. Photos from "behind the scenes" (in dressing rooms and recording studios) might seem to have a natural feel to them, but Kramer admits that Dylan was never unaware of the presence of a photographer.

"He was very smart about the camera," he admits, adding another dimension to one of rock's most mysterious icons.

The third season of the popular HBO concert series Reverb kicked off in mid-September, and local musician Dave Hill -- who runs the website (hbo.com/reverb), writes the short blurbs that air on the artists, and wrote the theme music -- already has some wacky ideas for promoting it.

Even though the program, which includes live footage of big-name artists (this year's show has already featured Alanis Morissette, Hole, the Marvelous 3, Imperial Teen, and Everlast) in club settings, hasn't yet filmed a segment in Cleveland, Hill says it's not out of the question. His band Cobra Verde will also possibly be featured in one program -- the band was initially supposed to be on the show with Pavement that's taping this weekend in San Diego, but had already committed to touring with Mike Watt and had to turn down the opportunity. In the meantime, Hill, formerly of Sons of Elvis, is littering the website with his silly commentary ("I am the new Hollywood "it' girl, the next Leo, America's fresh-faced boy next door, and your new best friend all rolled into one") and has even come up with an oddball contest idea.

"There will be a giveaway to win a magical weekend in Cleveland," he says. "It will include tickets to a concert and the opportunity to help me do my errands. The winner will probably just go with me to get a haircut, go to the bank, just day-to-day stuff. Then we'll probably get some Chinese food, go see a show, and then I'll drop them off at the airport. That's just the skeleton of the plan. I'll probably build on it. We'll probably rent some movies -- stuff like that."

Hill, who also plays in the group Uptown Sinclair, which is in the process of finishing an album, doesn't choose all the bands that play on the show (a panel of producers has final say), but says he jumped at the chance to work on the show with studio guru Doug Colson, who mixes the sound at Butch Vig's studios in Madison, Wisconsin.

"Doug's great," he says, adding that he worked with Colson when he played in Sons of Elvis. "A lot of times with live music shows, the sound ends up being crap, because it's hard to mix something coming out of little TV speakers. But Doug has done a great job. He's like a genius with all that stuff."

Future episodes of Reverb, which airs Tuesdays at 11:30 p.m., will feature Brian Wilson, the Beastie Boys, Beck, Moby, and Built to Spill.

The "Take a Chance Thursdays" singer-songwriter series at the Brick Alley Theatre lived up to its name last week. Headliner Stephan Smith, a Cleveland native who grew up in West Virginia and now lives in New York, opted to set up in the midst of the small crowd rather than on stage. He proved capable of singing both street-corner doo-wop and Hungarian gypsy music. Too bad he had to preface each song with rambling diatribes about worldwide peace and other self-righteous stuff. His lengthy set left less time for Jeff Buckley-inspired Michael Jantz, who proceeded to play what he called a "short set of short songs in a short amount of time," and closer Jann Klose. Klose, who plans to move to New York before the year is up, played a number of tracks from his recent album, The Strangest Thing, and showed off the ability of his band (keyboardist Joe Kaplowitz and trumpet player Dominick Farinacci), who even executed a jam with Smith (on fiddle) at one point. While his lyrics often smack of naïveté, Klose has amazing vocal range (he's performing in La Traviata later this month) and smart pop/jazz sensibilities. He'll perform again on October 9 at the Brick Alley Theatre with the Kennedys. For a full schedule of his shows, consult his website (www.jannklose.com), and for the Brick Alley's schedule, consult their website (www.brickalley.org). -- Jeff Niesel