Dono: The Roots of Rhythm; Clevelandhits.com 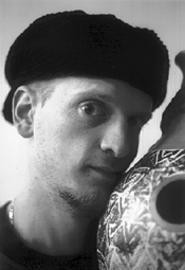 While it's not technically a rave, Dono: The Roots of Rhythm, a show that will pair filmmakers with DJs and dancers, appears as if it will be just as entertaining as an all-night DJ show. The event, which will take place on June 23 at the Cleveland Public Theatre (6415 Detroit Avenue), will feature an aerosol art installation by SANO, performances by the drum 'n' bass group Pureplex and the multimedia outfit SAFMOD, and DJ sets by Dan Curtin, Tik Tak, Illform, Jude Goergen, and Chris Pulse.

"It's for the people who like new things and still have a taste for some things that are more traditional, because the evening is a mix of multimedia performance and original, minimal techno and drum 'n' bass," says organizer Neil Chastain, who plays percussion in both Pureplex and SAFMOD. "It's a variety of stuff, and the only way it's like a rave is that it's a lot of music in one night. I don't want anyone to think it's a rave."

Chastain initially studied classical percussion at the Cleveland Institute of Music for two years and took a year off upon finishing. In that year, he cut a record with the hard rock group Craw before attending the University of Michigan, where he majored in jazz improvisation with a specialization in electronic music. He continued to play in Craw while going to the University of Michigan, where he met dancer Young Park. The two formed the collective SAFMOD, a group they developed further when they returned to Cleveland in 1993. Chastain, who also plays in a jazz band called the Tom Prasek Sextet and a Latin group called Tropical Jam, is the primary composer in Pureplex, which will be using the show as a way to celebrate the release of Acid Drum 'n' Jazz Bass, its second CD.

"My approach changed [on the second CD]," Chastain explains. "I wanted to include more live instruments and more on the acoustic side, whereas the first recording was largely electronic. This time, the music came about from the integration of the two mediums. Some of the tracks have more live instruments. There's a variety of material, but I think it conceptually fits into one area -- acid drum and jazz bass."

Clevelandhits.com celebrated the launch of its website with a media meet-and-greet on June 15. At the event, which had a lunch spread that included coconut-covered lobster, slices of tender pork, and packages of the appropriately titled Hits cookies, President and General Manager Michael J. Hilber (a.k.a. Big Mike) demonstrated the different uses of the site, which features live streaming audio, concert listings, and music news. Several Internet jocks have been recruited to spin the tunes -- you can view them with your Windows Media Player.

"These are guys you'd like to hang out with," says Hilber of the personalities he's employed. "When you're sitting around on a Saturday morning, you have a friend."

The one jock with name recognition is Program Director Dave Eubanks (a.k.a. Big Dave), a veteran who was most recently program director at the Top 40 station WZJM-FM. And given his background, it's likely that Eubanks will initially stick to safe, Top 40 programming -- bands such as Matchbox Twenty, Christina Aguilera, Sisqo, and Britney Spears are already in heavy rotation.

"We had to have some familiarity with the programming," Eubanks says, adding that he wasn't going to play unedited versions of rap songs that might have expletives, even though the FCC regulations that apply to radio don't apply to the Internet.

"We have the boundaries of good taste," he says. "I have a nine-year-old daughter, and I know she's going to log on."

Hilber and Eubanks also maintain that the site will be sensitive to listeners' needs. To that extent, it has a request section where listeners can choose the songs they want to hear and make comments about what they like and dislike about the site. Currently in the works is a Sunday local music program, which will air from 10 a.m. to 3 p.m. and be co-hosted by a different local band each week. While the site looks like a good way for local bands to get exposure and a way to introduce a variety of music that you don't normally hear on commercial radio, we're still trying to figure out how we can tune in while driving to and from work.