Sounds From the Underground 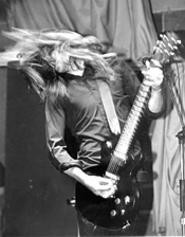 Toxic Shock truly is Cleveland's most underground club: Located in the basement of a house tucked in a rural Olmsted Falls neighborhood, the new BYOB venue could pass for a bomb shelter (bonus!), but so far it's just a good place to get bombed on the cheap with some of the area's best under-the-radar bands.

The space -- nothing more than a bare cinderblock basement, adorned with extension cords hanging from the ceiling -- can accommodate roughly 100 guests. Most of the 50 to 60 who showed up for opening night were friends of the bands: a fairly even mix of young punk chicks and dudes. The result was a loose, friendly atmosphere, with fans and bands chugging beers in unison while discarded empties mounted on the floor.

Disengage, one of Cleveland's biggest rock draws, was combustible in the tight confines, where the volume is predictably, pleasantly overwhelming. Illuminated only by a single light behind the drumkit, the silhouetted band members exuded an eerie menace and turned in a fiery, off-the-cuff performance, repeatedly hurling themselves into one another and the audience.

Toxic Shock's next show (this Friday) looks equally promising, with Allergic to Whores (frontman Ray Terry owns the spot) joining Clevo rockers the Jack Knife Powerbombs and gutter-punks Jynxt. In the meantime, the hard-to-find club would do well to put a phone number on its event fliers, so folks can call for directions.

Local guitarist Billy Morris has parted with Warrant. According to Metalsludge.com, Morris plans to tour on his own this summer as part of Metal Sludge's Summer Xtravaganza Tour, which will also feature Faster Pussycat, Enuff Z'Nuff, and others.

Cleveland goth front-runners Midnight Syndicate are preparing to get medieval on your ass: The duo recently entered a deal with the Washington-based adventure game company Wizards of the Coast to produce the official soundtrack for the classic role-playing game Dungeons & Dragons. Scheduled for August release, the album promises to be a dark fantasy disc, filled with the kind of foreboding soundscapes that have made Midnight Syndicate a favorite in haunted houses and amusement parks the world over. No, really.

Cleveland's dark electronic rockers No Blindfold are the first unsigned local band to break into rotation on 92.3 Xtreme Radio. The group earned the distinction after its song "Good Morning" swept the Xtreme Radio three-day Cage Match contest, giving such major-label bands as Stone Sour and Blindside a much-needed wakeup call.