Sounds of the Soul

A superb new seven-part PBS series chronicles the history of the blues. 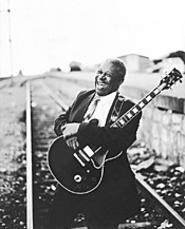 Countless historians, critics, and dictionaries have tried to concoct the consummate definition of blues music, but perhaps B.B. King put it best in his 1996 autobiography, Blues All Around Me: "The blues was about survival." Rooted in the hearts of desperate souls -- those tormented by heartbreak, social injustice, and death -- the mere articulation of the blues signifies the resolve to endure and ultimately rise above human suffering.

Still, the past 100 years of blues music have repeatedly been marked by the need for key figures to fight for the genre's survival and perpetuation. It took Alan Lomax's 1930s field recordings of spirituals, worksongs, and rural folk tunes for the Library of Congress to preserve the history of the blues before it died off with its original purveyors. And in the 1960s, when blues was usurped by newer forms of music, it took such pasty Brits as the Beatles, the Rolling Stones, Cream, and Led Zeppelin to rescue it, reintroducing its sound and vibe to enthusiastic American audiences and creating new opportunities for the blues musicians who'd practically been put out of business a few years earlier.

The latest savior of the blues is Martin Scorsese, whose fantastic new seven-part PBS series, simply titled The Blues (set to begin airing on Sunday, September 28), goes a long way toward ensuring that current and future generations don't lose sight of its founding fathers and mothers. Six years in the making, the series comprises seven feature-length films, each directed by such cinematic notables as Wim Wenders, Charles Burnett, Richard Pearce, Clint Eastwood (his Piano Blues was unavailable for review as of this writing), and Scorsese himself. Part of what makes The Blues such a unique and striking achievement is that it frequently eschews the chronological survey style normally associated with PBS (e.g., Ken Burns's Jazz) for a more nonlinear, impressionistic approach that aims to convey the spirit of the blues, rather than beat one over the head with ceaseless facts and figures.

The series opens with the beautifully shot, Scorsese-helmed Feel Like Going Home, which follows contemporary blues musician Corey Harris on his quest to discover the roots of Delta blues while incorporating rare archival performances from such departed legends as Son House, Muddy Waters, and John Lee Hooker. Harris travels through Mississippi and eventually to Mali to seek out, learn from, and perform with such still-living musicians as Willie King, Taj Mahal, Jelly Roll Kings drummer Sam Carr, backwoods-dwelling fife master Otha Turner (who died shortly after filming), and Ali Farke Toure (the "West African John Lee Hooker"). Refreshingly, Harris comes off more as an attentive and appreciative student than an overly inquisitive interviewer, which makes every rendezvous feel natural and offers an understanding of each personality, rather than a laundry list of their achievements.

Richard Pearce directs The Road to Memphis, a moving look at the triumphs and tragedies of old bluesmen in the modern age. With a digital camera and a vérité style similar to that of Michael Moore, Pearce follows B.B. King and Bobby Rush as they convene in Memphis, the city that launched their careers, for a reunion concert that also features hometown legends Rosco Gordon and Ike Turner. The classy King, of course, is treated like a king -- whether it's the admiring fans that accost him in a hotel or his well-appointed tour bus -- and recent concert footage shows he can still easily pack a big theater. In contrast, Rush is seen traveling from gig to gig in a ratty old bus and arguing with promoters about how little he's getting paid, though the 66-year-old bluesman remains convinced that he'll soon draw King-like crowds and be "big as bubblegum." The memorably cringeworthy scene that follows, in which we see a bit of Rush's raunchy, James Brown-meets-Dolemite routine at what looks to be a modestly attended bingo hall, sadly suggests otherwise.

Charles Burnett's Warming by the Devil's Fire and Wim Wenders's The Soul of a Man are the series' two most radical departures from the standard documentary form. Devil's Fire uses a fictional Bildungsroman narrative to tell the story of an 11-year-old Los Angeles boy sent by his mother to live with his preacher uncle in 1956 Mississippi in order to be "saved from sin." Instead, he's "kidnapped" at the train station by his other uncle, a skirt-chasin', hell-raisin', music-lovin' guy named Buddy, who intends to expose his nephew to the dark underbelly of southern blues. Using the device of Buddy's "lessons" to the boy, Burnett works in some wonderful archived performances that focus heavily on such female blues singers as Bessie Smith, Sister Rosetta Tharpe, Mamie Smith, and Elizabeth Cotten.

The Soul of a Man, meanwhile, is a surreal piece of work that traces the lives of Wenders's three favorite bluesmen -- Skip James, Blind Willie Johnson, and J.B. Lenoir -- through a convergence of fact and fiction. Since very little footage of James and Johnson exists, Wenders filmed actors playing the roles of each musician with an ancient silent camera, then blended that with actual footage from the South during the time period. The effect was reportedly good enough to fool audiences at this year's Cannes Film Festival into thinking the sequences were genuine.

Certainly, it's interesting to learn how a bunch of white guys came to live and breathe the blues in postwar England, but Mike Figgis's Red, White & Blues is a bit of a visual disappointment, since it sticks the closest to the typical music documentary form. It's mainly constructed around sit-down interviews with the likes of Eric Clapton, Steve Winwood, John Mayall, and Mick Fleetwood, plus a newly filmed (yet fairly middling) Abbey Road Studios session with Van Morrison, Jeff Beck, and Tom Jones leading an assembled band through numerous blues standards. A bit dry and overlong, the film contains too many talking-head moments.

Perhaps the most engaging installment of the entire series is Marc Levin's Godfathers and Sons. Echoing the observation of a downtown Chicago music fan that "blacks plus Jews equals blues," the film trails Public Enemy's Chuck D. and famed producer Marshall Chess, son of late Chess Records founder Leonard Chess (a Polish immigrant), through the Windy City as they link up with one of the rapper's biggest influences, the Electric Mud Band -- a critically panned late-'60s project that attempted to update Muddy Waters's sound with acid rock -- to record all-new tracks.

It's fascinating to watch a wide-eyed Chuck D. hang and perform with the old Electric Mud bluesmen and soak up their history, or witness Chuck and Marshall candidly discuss issues of race and the blues. But even more significantly, by bridging the gap between the old and new, by showing the desire for today's hip-hoppers to embrace their musical forebears, Godfathers and Sons especially embodies the mission statement of The Blues as set forth earlier by Corey Harris: "To know yourself, you have to know your past, and to know where you're going, you have to know where you've been."