Old Tremont lies at the heart of Ray DeCapite's work. 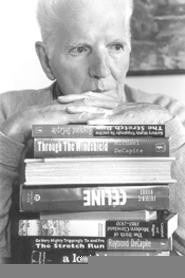 Maybe movies used to cost a nickel because they had to compete with free entertainment. Activities like street fights, stickball played with balls made from crumpled-up newspaper, or practicing the harmonica for the neighborhood variety show.

For writer Raymond DeCapite, raised on Cleveland's immigrant South Side during the Depression, the front stoop was the best seat in the house. A trip to the corner store for tomatoes became an epic, if his cousin Danny, "probably the greatest character who ever lived on the South Side," was nearby.

"He lived there his whole life," recalls Ray. "He moved from a place on West 11th to a place on West 10th and used to say it was a big boost for his wife, because she finally had a bathtub. They used to take baths and showers at the [Lincoln Park] bathhouse."

A storyteller, Danny "embroidered everything. But at the heart of everything, there was truth." The younger Ray, a good listener, sharpened his ear for dialogue at the feet of a master, embroidering his own truth. He's devoted his life to writing fiction that takes place on or near those familiar streets, sometimes calling them by name -- Starkweather, Professor -- and sometimes by imaginary names -- Jackson, Coburn Place. The resulting lyrical, bittersweet little books are like the gold flames that flicker in the steel-mill Hades. Coated in the soot of the Tremont neighborhood, they've been overlooked by many and pored over by the few who've discovered them.

"They're the kind of books that not many people know about, and the people who do want to steal them from the library," reflects Ray's son, Michael, a struggling writer in San Francisco. In August, Mike released his dad's previously unpublished novellas, Go Very Highly, Trippingly To and Fro and The Stretch Run, through his small-press outfit, Sparkle Street.

Featured in a recent Kirkus Reviews series on "undeservedly neglected writers," Ray has been compared to another Italian-American, West Coast writer John Fante, who shares his fondness for dialogue. But the wry tenderness with which Ray draws his characters -- and the working-class neighborhood setting, framed by the looming behemoth of Cleveland's industrial valley -- is all his own.

Now 75 years old, Ray left Tremont before his son was born. He and Sally, his wife of 39 years, now live in a high-rise apartment in Parma Heights, a marble's roll from Parmatown Mall. There's no Danny around, but Ray can stand on the balcony and wave to his sister, who lives in an identical building across the parking lot.

Mike thinks his dad might be discouraged after years of toiling in obscurity. He hasn't written much in two years, his longest dry spell yet. Sally wonders if she should set Ray's typewriter on the kitchen table before she goes to bed.

"Because he gets up very early. And he'll see that thing and, I don't know -- maybe sit down."

He hopes to start something, he says, "before the snow flies." His voice is gruff yet fragile, like cracking ice. And his black eyes, startling under a shock of white hair, give off a hard sparkle. He seems to be one of those people who grew up plain and aged into handsomeness.

Sally doesn't think Ray was ever plain. They met 40 years ago, in the cramped news bureau where she was a secretary. He was applying for work. She eavesdropped on the interview, then tried to talk the uncomfortable-looking fellow out of taking the full-time job.

"I know it's bad form, but I thought he was special," she remembers. "And I knew that they would hire him."

But he needed the money. His older brother, Michael, a promising novelist, had died in a car crash in Mexico, leaving behind a young family. And Ray's own first novel, The Coming of Fabrizze, had been rejected by publishers for two years running.

Ray and his brother shared more than an occupation -- they shared material. Their first books, worlds apart stylistically, both centered on their father: A gandy dancer on the Newburgh and Southshore railroad, he made and lost a fortune in the stock market in 1929. Defeated and in debt, he moved to Chicago alone, living with relatives.

A few years later, their father returned to work in a friend's wine store. Unable to reconcile the past, he never moved back in with his wife and three children. He took an apartment on West 25th Street, visiting on Sundays. "He tried to be helpful," recalls Ray. "My mother used to go over once a week, take his sheets and towels and pillowcases home, and clean them. She'd bring them back, and my father would give her five dollars. Which was quite a bit of money."

Titled Maria, Michael's was the more realistic novel. "Or so my brother liked to think," says Ray. "I thought he was trying to tell an honest story. But my father felt that he hadn't included all the things that should've been in the story, some things that exonerated him a little bit. His obsession. He had this dream of wealth."

"I was so moved by the beauty of the town and the surrounding mountains that I decided I wanted to do a different type of story, about a boy leaving a place like that. Leaving his family and friends. He was only 14 when he came over."

Fabrizze, Ray's debut, was a fairy-tale portrait of an idealistic youth who sailed to America, ascended to foreman in the railyard, married a beauty with gold-flecked eyes, got rich, lost everything -- then whisked his family away to Chicago, while his adoring neighbors prayed for his return. Though the hero falls, the story ends on a hopeful note.

"I took the same materials and turned them into a folk tale," recalls Ray. "A romantic kind of thing. It wasn't tragic anymore. It was sad. Things fell apart at the end. But it was not like the story my brother told. I was seven or eight when my dad left, so I wasn't so much a part of the family situation."

When Fabrizze made it into print in 1960, it got glowing, front-page reviews from the New York papers. "Reading it is like discovering some new and strangely flavored wine -- a special vintage which one enjoys without quite knowing why," wrote a Times reviewer.

But that enthusiasm didn't sell books. A Lost King, Ray's second book, garnered similar critical reception and public indifference. Yet it's very accessible, composed of barbed, funny, and desperate banter between an Old World father who believes in hard work and a New World son who would rather play the harmonica than break rocks.

Dennis Dooley, a Cleveland writer who likes to shoot the breeze with Ray at Sokolowski's restaurant, calls Ray his "favorite subject." In the South Side relic -- its wood paneling adorned with pictures of President Clinton, the Pope, and Big Chuck and Little John -- Ray's picture is there, too, hung by the bar, where he likes to sit and chat with Bernie Sokolowski, his friend from the old neighborhood.

"Ray saw that there is not one American dream. There are two American dreams," marvels Dooley of A Lost King. "One American dream is the dream of the father: You have the opportunity to work very, very hard and make something of yourself. But the son's version is that America is a place where you are free to realize yourself and discover fully who you are. Where you don't have to spend your life sweating in somebody's factory."

Ray had another setback in 1961, when his retiring editor was replaced by an unsympathetic sort. It would be 20 years before he'd see another novel published. But he persevered, completing several plays, two novellas, and a fourth novel.

To supplement Sally's income, Ray "sold dreams" part-time in a state liquor store and received small windfalls from movie studios that took out options on his books. Not much came of those, although A Lost King was eventually bastardized into Harry and Son, a film directed by Paul Newman.

Ray took it hard, Dooley recalls. "I said, 'Is it faithful to your book?' And he said, 'Well, other than the fact that they've changed the location from Cleveland's industrial valley to Florida, and the family from an Italian family to a WASP family, and they've altered most of the dialogue in the book -- it's faithful to the book.'"

Occasionally, Ray gets a late-night phone call from the beyond -- someone whose life was changed, recently or long ago, reading Fabrizze or A Lost King. Maybe his time hasn't come yet.

"That could be," he says, then pauses. "It better come pretty soon."