It's her party and she'll fry if she wants to: Chef Susie "Slingo" Porter teaches Cleveland what southern hospitality is all about. 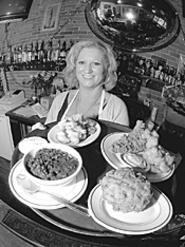 Like Skittles, comfort food comes in a rainbow of flavors. So it is, then, that after a problem-packed day, a downhearted Yankee may pine for baked beans with brown bread, while a troubled Midwesterner may crave tuna-noodle casserole and a jolly Jell-O salad instead.

If you grew up in Philly, maybe cheese steak is gustatory shorthand for your thoughts of home; if you were weaned in a desert on blue cornmeal, maybe it's Navajo tacos. And if you grew up in the South, it's possible that memories of mama's love taste hot and crisp, and arrive on your tabletop straight out of the deep fat fryer.

Not that you have to have been raised on hush puppies and fried grits to groove on The Town Fryer: Owner and chief fry baby, Susie "Slingo" Porter, has poured enough love into her little down-home tavern on the edge of Chinatown to embrace anybody's inner child.

A southern sweetheart with a honeyed drawl, Porter developed her own definition of culinary comfort during her days in Houston, New Orleans, and Charlotte, and began translating it into the lingo of the Rust Belt a little more than three years ago. After stints in several East Side taverns and hot-dog joints, though, the former custom-software developer decided to jump into the food biz with both feet, scouring the area until she found the perfect location for her eatery in a 134-year-old brick building on Superior Avenue that old-timers may recall as the former Chung Wah Chinese restaurant.

It would be an understatement to say that, from the outside, the Town Fryer looks like nothing much. Inside, however, the place is neat, trim, and humming with personality (thanks to more than a year of hard labor on Porter's part), beginning with its original tin ceiling and exposed brick walls, and extending all the way down to the worn wooden floors.

Servers are welcoming, the clientele is friendly, and the vibe is as laid-back as a black cat napping in the Delta sun. If the mismatched tables and chairs look like hand-me-downs, then a surprising collection of wall art -- including two enormous, impressionistic canvases by a local art professor and Porter's own sensitive watercolors -- is a breath of fresh air. And if the requisite stuffed and mounted stag's head leers out from behind the bar, there's an oversized "Buck Fush" lapel pin sitting there, too, to add a jab of political commentary. Factor in the white-cotton curtains at the window, a jukebox spinning everything from Ray Charles to Pink Floyd, and the seductive scent of homemade food, and it's easy enough to recast the Town Fryer as a modern Cleveland interpretation of a 1950s Memphis roadhouse.

As for that food, Porter's colloquially written menu (motto: "It ain't comfort food if it isn't made with love") is about equal parts solid home cookin' and lightweight culinary adventure. In the first category, for example, there is her wonderful interpretation of southern-fried chicken, made with boneless, skinless breast meat, marinated in buttermilk, dipped into her "special" batter, and deep-fried to an amber glow. Crunchy outside, juicy within, and almost entirely greaseless, it's just as tasty after a night in the fridge as it is hot from the fryer.

But in the second category, there's the heretical fried macaroni and cheese, a kitchen aberration that transforms a true comfort-food classic into a bland and starchy oddity, best used as a sop for the bottled hot sauce set on every table. The "South o' the Border" egg rolls didn't get our mojo working, either: The deep-fried wonton wrappers were limp, the sautéed-chicken-and-onion filling was dully seasoned, and the bottled salsa tasted thoroughly pedestrian. (Gotta say, though, the homage to the old Chung Wah was a tasty bit of slyness.)

Fried dill-pickle slices (which legend says were invented in Hollywood, Mississippi) and thick-sliced onion rings, both in a light tempura-style beer batter, were so transparently frangible they seemed to evaporate on the tongue -- at least when they were fresh out of the fryer. Dispatch them quickly, though -- they become greasy as they cool.

Other well-done choices include mild, moist, farm-raised catfish filets enrobed in a toothsome golden crust with a hint of Cajun spices; and several gussied-up styles of all-beef hotdogs, including a chili dog topped with Porter's homemade black-bean chili and a Chicago dog overloaded with mustard, sliced tomatoes, chopped onions, dill pickle, atomic peppers, and fluorescent-green pickle relish (the de rigueur celery salt was imperceptible, if it was there at all). Polish boys, topped with barbecue sauce, coleslaw, and French fries, are options too.

We were pretty stoked to spot the traditional N'Awlins' style po' boy sandwich on Porter's menu, in shrimp, chicken, catfish, and archetypal oyster versions. Slapped onto a fresh, lightly toasted hoagie roll and smothered in chopped lettuce, tomato, and a spicy mayo-based sauce, both the chicken and oyster versions were so ample that there was no way to eat them out of hand, and the juxtaposition of crisp and crunchy textures was divine. Still, we would have been more impressed had the fillings included a lot more meat and a little less lettuce.

Porter and her crew clearly know their way around the quintessential red beans and rice, though, serving up mammoth portions of the juicy Cajun staple, piqued with enough spicy andouille sausage to bring a wreath of sweat to one's brow. A slightly gummy block of warm, butter-drenched cornbread comes with -- and helps to moderate the heat.

Big tumblers filled with sweet iced tea and homemade lemonade help cool and cleanse the taste buds too, although for the after-work crowd, something from the collection of two dozen or so bottled beers (including Pacifico, Stella Artois, and Corona at $3 per bottle), or a shot of Wild Turkey, might be more apropos.

For dessert, of course, a battered and deep-fried Twinkie would seem mandatory. Be warned, though, that the vagaries of deep-fat frying being what they are, getting the little buggers to just the right point between greasy and overly browned is apparently no cinch. In fact, out of three Twinkies we've recently ordered, one was too crunchy, one was too greasy, and only one was just right, with the delicately indulgent mouth feel of a freshly fried fritter and just a suggestion of lacy crispness 'round the edges. Alternatively, there are fudgy battered-and-fried Oreos; sweet-tart lemon squares on thick, buttery shortbread crusts; and sleek banana pudding, ringed with Nilla Wafers.

While Porter's oeuvres are low-priced and amply portioned, it goes without saying that a steady diet of such foods would probably kill you. And, in fact, it's not unusual to overhear Porter's slightly self-conscious patrons joking with one another about the need to have Lipitor drips installed in the restrooms or the wisdom of packing along a defibrillator in the ol' briefcase.

Still, while Porter might be quick to tell you "it's a southern thang," I suspect that the guilty pleasure we nonetheless take in her homey cooking is proof that, despite variations in dialect, comfort food may well be the most universal of all languages. If an occasional binge on fried pickles and Twinkies -- not to mention live Friday-night blues and Porter's brand of authentic hospitality -- is what it takes to soothe our weary Cleveland souls, then I say, y'all knock yerselves out.