Southern hip-hop, Fox News — what’s the difference? Both appeal to red-staters, and both are unfairly maligned 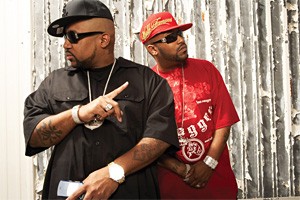 The Rupert Murdoch-owned home to such neoconservative mouthpieces as Bill O'Reilly and Sean Hannity is best known for cheerleading the Iraq War and finding John McCain not right-wing enough. It even has the audacity to declare itself "fair and balanced" — which is approximately as accurate, liberals would argue, as Paul Wall calling himself black.

Which brings us to the coastal hip-hop elite's favorite whipping boy: southern rap. With its focus on stripped-down beats and basic lyricism, it is the spawn of Satan himself, argue the B-boyin', Shaolin-representin', G-funkin', Golden Era nostalgintelligentsia.

But even though Fox News and southern rap both have anti-intellectual appeal, there's more to the story than that. Rather than simply pandering to the red-state masses, they have tapped into powerful populist sensibilities in areas that didn't previously have a national voice.

By the early part of this decade, the lyricism of New York rap and the gangland stories of Los Angeles hip-hop had grown out of touch with midwestern and southern audiences — particularly with girls who simply wanted to dance. Production techniques had grown vastly more sophisticated, to the point where many celebrated founding-father tracks sounded — we hate to say it — corny. Eric B. & Rakim's "Follow the Leader" is a genuine classic, but can you really imagine a club full of anyone but ironic hipsters busting a move to it?

The same is true of the majority of old Snoop Dogg, Warren G., 2Pac, and Notorious B.I.G. tracks, which tend to be more conducive to blazing a blunt with your homeys than packing a club.

And so genres such as crunk and snap music stepped in to fill the void, and hit-makers like Three 6 Mafia, Paul Wall, Mike Jones, the Cash Money crew, and Lil Jon offered style over substance and big, ridiculous beats to stimulate your ass, if not your mind.

Meanwhile, rather than exercising their famous "tolerance," liberals blew a gasket after Fox News debuted in 1996, and they continue to believe the network is more biased and somehow less than CNN or MSNBC. But more likely, Fox just doesn't fit their stereotype of what a cable news channel should be.

Take perky Fox Report host Shepard Smith — perhaps the Soulja Boy of news anchors — who doesn't really seem like he could hold an intelligent conversation on, say, Russian politics. Plus, he appears to wear eyeliner. But, we would argue, the more you watch him, the more you can't help but appreciate his silliness and infectious energy. Eventually, you wonder what was so great about Brian Williams in the first place.

Similarly, southern rap detractors — including coastal players Ghostface Killah and Nas — contend that the music isn't just different; it's worse. Lots of people heard Nas' 2006 album, Hip Hop Is Dead, as a direct attack on southern rap. It spoke to a variety of themes, but its disparagement of an industry dominated by stars below the Mason-Dixon line was enough to piss off Young Jeezy and Ludacris, who started wearing a "Hip Hop Ain't Dead" shirt.

But is it really so crass to embrace your dancing shoes over your thinking cap? Should you really need to be an expert in Eastern mysticism to like an album?

And even though they can appear simplistic, the best southern rap songs did not come about easily. Sure, screaming "Yeah!" and "OK!" at the top of your lungs doesn't seem like it requires much effort, but you're deluded if you think crafting party-starting jams is easy.

And let's not forget that the genre's brightest stars — UGK, Lil Wayne, T.I., Scarface, Ludacris, and OutKast — can be held up against the coasts' intellectual best.

As for "minstrel rap" — that lowest common-denominator outpost of the genre, characterized by nursery-rhyme interpretations (Jibbs' "Chain Hang Low") and racial stereotypes (Ms. Peachez's "Fry That Chicken") — it's about as hard to defend as the shrill, reactionary chatter of Sean Hannity.

But painting the whole genre with a broad brush is problematic — just as it's easy to forget that beyond such blowhards as Greta Van Susteren, Fox also has measured, insightful hosts like Brit Hume and Chris Wallace. The latter, in fact, recently called in to Fox & Friends to offer a smackdown to the show's hosts after they spent a couple of hours trashing Barack Obama.

If you're still not convinced that southern rap and Fox News are one and the same, consider the countless southern rap odes to big cars and the wasteful misuse of fossil fuel. There's something the global-warming deniers on Fox News could certainly get behind.