DJ Rob Sherwood is playing to a new crowd. 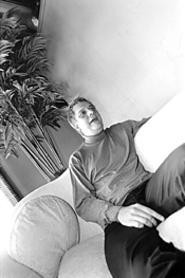 With his disheveled hair and casual attire, Rob Sherwood doesn't look like the kind of guy who gives a shit about his image. But he does. "What's the angle for this story? Local DJ makes good?" he cautiously asks one afternoon from Amazona, the new Warehouse District club he manages with Scott Lucci. Sherwood hopes to turn the place into a new hotspot for DJ culture, but he still carries what he calls a "big stigma" after working the turntables at Metropolis between roughly 1991 and 1999. That venue, a cavernous club located on the West Bank of the Flats, is home to fetish balls, raves, and hip-hop parties -- not the kind of activities with which Sherwood wants to be associated. He refers to it as a "shithole" and would rather not elaborate.

"The reason I came here, to this tiny little place set away from everything else, is because I want to play records and cater to people who want something so much better than all the rest of the crap that's out there," he says while preparing Amazona for its official grand opening (the club has been open for the past month on a limited basis). While Amazona is hardly in an isolated location, the fact that it's in the upscale Warehouse District means that Sherwood can reach a different, older crowd.

"I realized, one day, I was chasing a bunch of kids I don't give a fuck about anymore," he says. "I was busting my balls, losing thousands of dollars a week to entertain these people. I believe there's a lot of people over 30 who want to hear good music and be stimulated -- and ecstasy and glowsticks aren't stimulating to them."

For Sherwood, Amazona also represents a chance to make good on the potential of the short-lived Music Institute, a dance club he ran for a year on the West Bank of the Flats after he left Metropolis. While there, Sherwood brought in nationally recognized DJs. "Unfortunately, I think there's only 16 of us who understood it. It didn't work, because if it wasn't a Keoki or a Bad Boy Bill, the kids didn't know what it was. They didn't care."

Sherwood boasts that he's played more records for more people in Cleveland than any other DJ. And he might be right. After purchasing his first rock records -- Aerosmith, Frampton Comes Alive, and Kiss Alive -- some 20 years ago, Sherwood was "on the bus to become a rock star." While in high school, he played in a couple of bands until he started working at the Rascal House. There, he edited music videos for dance nights and, because he made extended mixes, developed skills that would help him with his DJing. Six months later, he was so successful as a DJ, he even had a mix show on the radio. Not bad for a guy who describes himself as "a generic rock kid, listening to Kid Leo on Friday nights."

Sherwood then started hosting raves in Cleveland -- he maintains he threw the first local raves in the early '90s. In the mid-'90s, he and Mike Filly, another local DJ, did 27 dates in 36 days, traveling from one end of the country to the next. "We came back from that, and by the time it was done, the rave scene was changing and becoming really unprofessional," Sherwood says. "I got tired of playing records and trying to figure out where the promoter was so I could get paid. At that point, I said, 'I'm gonna focus on a club and focus on my records.'"

Sherwood started spinning on Sunday nights at Metropolis and remixing records for the likes of Deee-Lite, Sadat, and My Life With the Thrill Kill Kult. He was "commissioned" to do remixes for Madonna and Everything but the Girl that never saw the light of day. Ironically, Sherwood's biggest moment came when Philly DJ Josh Wink put out Herehear in 1998. One of the tracks, "Are You There?", features Sherwood vocals that Wink sampled from an answering machine recording. "I called him up and left a message, 'Wink, old man, are you there?'" Sherwood says. "He called me up one day and starts playing me this track with [my message] getting twisted around. It was really funny. For one hot minute, I was the voice of electronica."

That brief brush with fame doesn't ensure Amazona's success. With its freeze-dried palm trees imported from California, plush sofas, and copies of paintings by Picasso and Rousseau, the club embodies the elegance of the Roxy Music song that inspired it. But with other Warehouse District clubs such as the Funky Buddha, Wish, and Spy bringing in big-name DJs Scott Henry, Charles Feelgood, and Dieselboy, Sherwood will need more than a rainforest motif to distinguish his club. Sherwood's confidence, however, isn't rattled by the competition.

"I think I'm getting an intelligent crowd of people here, and that really can't be said about anything else in this town," he says. "The other clubs are booking the obvious. All the stuff they're doing at Funky Buddha is on MTV. LTJ Bukem? MTV. The guy from Portishead? MTV. There's nothing underground about that. Granted, it's not DJ Skribble. But I'm not seeing that any of this talent-buying is being done because someone is trying to present something of quality, or to educate."