by Michael Gallucci and Sam Prestianni 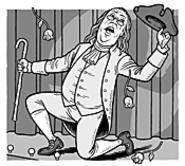 1776 is the appropriate bookend to Beck Center's season, says director Scott Spence. "We opened the season with Parade," he explains. "And while it represents a different era of Americana and deals with some of the seamier sides of America, 1776 seems like a nice piece of Americana to put at the end of the season."

The rousing musical -- which follows forefathers John Adams, Benjamin Franklin, and Thomas Jefferson, as they lay the foundation of our country -- has become a staple of small theater companies around the country, and Spence says its popularity is justified. "It's the finest book musical ever written," he says. "It's literate, it's funny, it's informative -- but not in a didactic way."

Which is why Spence is leaving 1776 just the way Sherman Edwards and Peter Stone wrote it. "You really can't reinvent that wheel," he says. "I'm playing it pretty traditional, because I trust the material. I know it's a standard, a chestnut, or what-have-you, but it's so verbal and literate." 1776 opens Friday at Beck Center for the Arts (17801 Detroit Avenue in Lakewood) and runs through August 10. Show times are 8 p.m. Thursday, Friday, and Saturday, and 3 p.m. Sunday. Tickets are $10 to $19; call 216-521-2540. -- Michael Gallucci

As if coasting down an infinite lonesome highway at midnight, New York City singer-songwriter Nina Nastasia treads a dark path amid despair and longing. On The Blackened Air, she addresses the spaces between what is, what was, and what was supposed to be, delivering her spare acoustic songs in a voice that's both fragile and tough. Nastasia lures listeners into her world with layers of six-string, accordion, cello, viola, mandolin, saw, bass, and drums. Framed by music that draws creatively from the American roots tradition, Nastasia's lyrics are utterly unpretentious, reflecting the realistic drama of the human condition. Nastasia is at the Grog Shop (2785 Euclid Heights Boulevard in Cleveland Heights) at 10 p.m. Wednesday. Tickets are $7; call 216-321-5588. -- Sam Prestianni