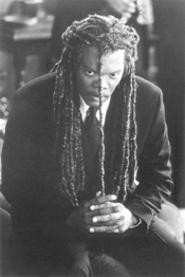 Hollywood appears to be developing a healthy sense of humor about Valentine's Day, which, from this cynic's perspective, is a good thing. In the new millennium, rather than dole out romantic trifles like Return to Me as per the usual plan, we've seen Valentine (bitter ex-nerd cuts beautiful people to bits), Hannibal (sadistic brain-eater as romantic hedonist), and now The Caveman's Valentine, set on February 14 and featuring Samuel L. Jackson as Romulus Ledbetter, a nut case who stares intensely at nothing in particular when he's not completely paralyzed with fear at the sight of an imaginary death ray.

Buried beneath what appears to be John Travolta's Battlefield Earth wig and fake beard, Romulus lives in a small cave in the middle of a park on the edge of Manhattan, where he believes he will be relatively safe from the surveillance and death rays of Cornelius Gould Stuyvesant, an imagined megalomaniac who lives at the top of the Chrysler Building, whence he shoots his yellow "Y-ray" beams that -- according to Romulus -- cause such minor annoyances as clogged toilets and police brutality. As the only one aware of this dastardly plan, Romulus is, of course, a target.

Known as "Caveman" by the various other residents of the streets and left alone by the police mainly because his daughter (Aunjanue Ellis) is a cop, Romulus keeps mostly to his own devices, occasionally composing original music (as it turns out, he's a Juilliard dropout) and living inside his own head -- a place subjectively represented by a set straight out of an R.E.M. video directed by Tarsem, in which muscular seraphs with moth wings gambol and frolic, entering a state of severe agitation whenever Romulus finds himself in the presence of a liar.

When Romulus wakes up on Valentine's morn to take a leak, he is greeted by the sight of a frozen corpse in the tree outside his cave. The cops figure the guy was just another junkie who died of exposure, but a series of minor events leads Romulus to think differently. In the first place, he remembers seeing the victim just days before, as he scrawled the cryptic message "Help me" on a poster. There's also the matter of "Stuyvesant's" mysterious Valentine message transmitted on Romulus's unplugged TV the night before, as well as his new green "Z-rays" (none of which actually exist, but just to confuse the issue, green is the predominant color of every form of food and drink seen in the film). Most notably, however, the dead man was the lover of one of Romulus's friends, another young junkie who's starting to believe Romulus's "Stuyvesant" theory, based on the fact that he's seen faceless killers like the ones Romulus describes as enforcers of the conspiracy.

Despite admonitions from both his estranged daughter and the recurring hallucination of his dead wife, Romulus becomes determined to discover the dead man's killer, even though he has been repeatedly told that there isn't one. His search leads him to an amusingly boorish bankruptcy lawyer, played by Anthony Michael Hall, who decorates his apartment in the style of the '30s ("The Depression was something of a golden era for my kind") and makes Romulus his own personal charity case, once the caveman's Juilliard past has been proved to his satisfaction. From there, the trail leads to the dead man's lover, a snippy and arrogant avant-garde photographer named David Leppenraub (Colm Feore), whom Romulus gains access to by pretending to be a successful composer who's been so inspired by Leppenraub's work that he's written a piece of music about him -- a gambit the genius-in-his-own-mind cannot resist.

Throughout the film, we get constant flashes of Romulus's "unreality" interspersed with what is actually going on: As he investigates, we catch sight of him on Stuyvesant's fictional camera monitors, in addition to director Kasi Lemmons's favorite device left over from Eve's Bayou (which also starred Jackson) -- flashbacks and flash-forwards in high-contrast black-and-white. This type of mixing of media has the potential to really mess with one's head, but Lemmons doesn't yet have the chops to pull it off: From the beginning, it's so clearly established that Romulus is a madman that there's little question of what is actually happening and what only exists in his mind.

It would have been perhaps more interesting to let us wonder awhile longer if Stuyvesant really does exist (the murder mystery is legit, but nothing to do with any conspiracy) or hint that Romulus may actually be the only sane one in a mad world. We don't even really know why he went insane, though we can speculate that his dead wife may have something to do with it. The whole mind-of-a-madman routine probably works better on the page than it does on screen (both the screenplay and the novel that inspired it are by George Dawes Green, who also wrote the book The Juror, filmed with Demi Moore), but as of this writing, the book remains out of print, so it's impossible to tell (check it out for yourself when the inevitable movie tie-in shows up).

The Caveman's Valentine deserves an A for ambition, but the final product is a pastiche of too many predecessors, from Wim Wenders's well-intentioned misfire The End of Violence to Terry Gilliam's The Fisher King to just about every recent film from Oliver Stone. There's a fairly gratuitous sex scene to hold our interest, and to prove that, as Romulus's dead wife puts it, "Some white girls'll fuck any kind of black man." And for anyone who has ever fantasized about Samuel L. Jackson, there's a split-second shot that leaves nothing to the imagination. Hall and Feore give entertaining performances, and Jackson gets to live out the method actor's dream of playing a crazy person. Given his track record as a tough guy, however, and his height, it's a bit of a stretch to think that he'd be cowed into submission by the likes of the puny adversaries herein.